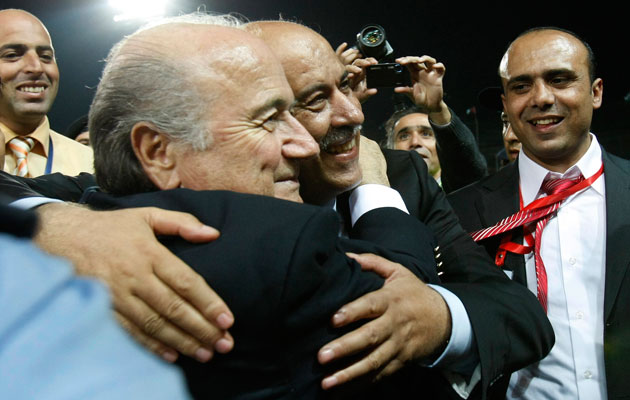 Sepp Blatter is to take to the air yet again, after weekend peace talks in the Palestine-Israel football dispute, to try to avert it erupting at FIFA Congress in Zurich on May 29.

Jibril Rajoub and Ofer Eini, respective heads of the Palestinian and Israeli football federations, attended a summit in Zurich this morning to address the FIFA president’s concern over the PFA’s proposal that congress suspends Israel from membership.

A statement from FIFA after the meeting said that “both member associations agreed to pursue the dialogue” and that Blatter “will travel to Israel and Palestine to meet their respective FA presidents and heads of state ahead of FIFA Congress.”

The reference to heads of state – presumably and ideally Israeli Prime Minister Benjamin Netanyahu and Palestinian President Mahmoud Avvas – suggested that Blatter accepted that the IFA has no control over the strategy of the Israeli government and its security services.

Blatter is keen to avert an Israel-Palestine row casting a dark cloud over a congress which he envisages as a personal triumph, climaxed by his re-election as president of the world federation.

Last week Eini flew to Switzerland to engage the support of Michel Platini, the president of UEFA.

Eini reportedly told Blatter, during their first meeting: “This request in FIFA congress is not only a disgrace for Israel and for the IFA, but also a disgrace for you and for FIFA.”

Blatter has always insisted that any member association fulfilling its statutory duties should not be suspended and indicated that, as far as he was aware, this applied to the IFA.

Eini has also written to the presidents of all the world’s 209 football federations urging them to reject the Palestinian resolution.

After the latest meeting he said: “I am a little more optimistic today but it does not change anything in our preparation for the possibility of a vote in Congress . . . Our argument remains clear, that this is an attempt to involve politics and sports and there is no place for such a move.”

Blatter will continue to find Rajoub hard to dissuade from pressing his congress resolution. Rajoub spoke out against Israel at FIFA Congress in Mauritius in 2013 and warned, in Sao Paulo last year, that he was ready to return with a proposal demanding Israel’s suspension from world football.

He cannot keep stepping back from the brink without major concessions by the Israelis.

Ahead of today’s meeting Rajoub said: “We will make use of every possible venue in order to protect Palestinian footballers and their right to benefit from the rights and fulfil the obligations stipulated in the FIFA statutes.

“Our call to suspend the Israeli Football Association from FIFA comes after nearly three years of a failed mechanism to secure meaningful and substantial commitments from the Israeli side, where oppression and discrimination against Palestinian sports in general, and football in particular, have remained unchanged.

“The Israeli Football Association (IFA) is part of the oppressive Israeli occupation and therefore, an accomplice in its apartheid policies.

“Rather than solve the problem, the Israeli Association has tried every possible venue to justify Israel’s apartheid policies. FIFA has been made aware of these issues first hand through the three years of its attempts to find a solution which sadly reached a dead end.”

Eini has always responded that – however slowly – progress is being achieved.

The IFA has recently penalised Beitar Jerusam, whose fans are the most notoriously discriminatory in the league, two league points for their latest outburst.

Also, the Israeli security service approved all permits for players and officials of the Bahraini club Al-Hidd as well as match officials from Taiwan, Jordan and Kuwait to enter the West Bank through Israel for the AFC Cup group game against Wadi A-Ness.