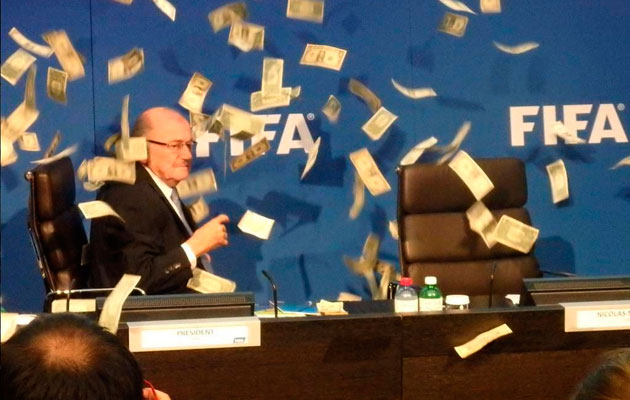 Qui s’excuse s’accuse, as the French say. Who excuses himself accuses himself. Which seems all too appropriate for Sepp Blatter’s latest strange assertion that corruption found at FIFA has nothing to do with him. Oh no, not me, guv.

And it is quite true that so far anyway, Blatter himself, amidst the welter of accusations, arrests and criminal charges accumulating at that rancid body, Blatter himself has not been charged with any malfeasance. Though a measure of his uneasiness was widely felt to be his recent failure to attend the finals of the women’s international tournament in Canada, where the long arm of the FBI could reach with ease. Not, to be fair, that it has reached him at all. But it is surely legitimate to ask why, given the appalling extent of the bribery and skulduggery that has been so abundantly proved to have been going on within FIFA, he had done nothing about it in his role as President.

How he could, as devastatingly revealed in Andrew Jennings’ book Foul!, have maintained such a close, friendly and genial relationship with that arch unmasked villain Jack Warner of Trinidad. And when my own paper the Sunday Times on the basis of analysis of literally millions of emails published damning accusations against an array of FIFA committee members, he could simply brush it all aside with public declarations of scorn.

Not, as we know, till the American investigators swooped on the miscreants did Blatter evince the slightest recognition that anything had been amiss.

Meanwhile there has been the mysterious matter of the accusations against Michel Platini in anonymous omissions which emanate from FIFA itself. The burden of which is that Platini, given his support for Qatar as World Cup hosts for 2020, is unfit to become the next President of FIFA. Well, as one who believes that himself, I can hardly dissent from that opinion.

Platini as I have so often written before having totally ignored his responsibilities as President of UEFA, first by outrageously voting for Qatar when the tournament was due to be played in the 50 degree centigrade of heat in the Qatari summer, then utterly ignoring his manifest role as UEFA President by supporting the decision to play the tournament in the European winter to the extreme detriment of his own UEFA members.

One should add that unlike the case of Franz Beckenbauer, who has been accused of chicanery in supporting the Russian and Qatari bids – and is still to dismiss the accusations – Platini appears to have been acting at the behest of the then French President, Sarkozy.

It has been alleged that the campaign against Platini, has been implemented from the office of Blatter himself, a member of Blatter’s staff being accused of involvement with a document entitled Platini Skeleton In The Closet which was sent to “several media organisations” from FIFA headquarters in Zurich.

UEFA have ledged a formal complaint with the egregious Jerome Valcke (the man the woman judge in a New York court, remember, called a liar) now, for a little while to come, still FIFA Secretary General, asserting reasonably enough that if a FIFA employee were responsible, then they “had acted in gross violation of the FIFA code of ethics.”

Reassuring I suppose to learn that one actually exists. Excuse me while I laugh.

Good for Alan Gowling, once a prominent midfield man with Manchester United and one of the very few professional footballers with a university degree.

In a letter to a national newspaper, I was delighted to see him firmly and cogently deploring something I myself have long deplored. The tendency among so many clubs, not least the bigger ones, to enlist players as young as nine or ten.

All credit to those such as Steven Gerrard and Jack Wilshere who came through with flying colours, but what of those, surely the majority, who fall by the wayside?

As Gowling wisely says and again as I have long lamented, rejection at so young an age is awfully hard to take. He  feels, with reason, that children so young should ideally be involved in schools football.

Ideally, one would like to see a ban on clubs snapping up children so young, alas it would be hard to implement. In the meantime, many a young heart will be bruised if not broken.

Irony upon irony. Last season, Aaron Cresswell the West Ham United left back was voted Hammer of the Season both by supporters and teammates.

Last Saturday at Upton Pak I saw him make the two early abysmal unforced errors to give Bournemouth two goals. Other blatant defensive errors would follow. You could hardly blame the Hammers’ new manager Slaven Bilic for these, but his first half tactics seemed bizarre.

No winger on either flank, yards of unused space. Not remedied till after half time, when at last, the talented Matt Jarvis appeared on the left wing and Dimitri Payet was switched from midfield to the right.

Yet Hammers began their League season in such style with the 2-0 win at the Emirates against Arsenal. A team which is still struggling, for all its talents, to find consistency. Only the goalkeeping of the £10 million newcomer Petr Cech saved them at home to Liverpool. Gary Neville insists they should buy; but at this stage of the season, whom?