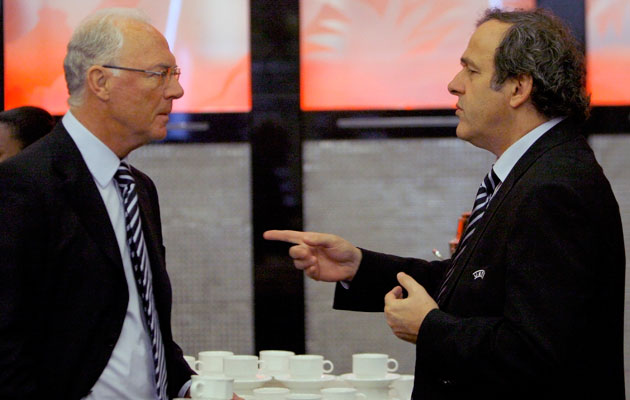 Sepp Blatter’s squeals of outrage at the revelations of FIFA’s infamous corrupt choice of Qatar may, predictably, have brought roars of applause from the African and Asian audiences he addressed in Brazil.

What else might we expect when these FIFA members are the long-standing beneficiaries of FIFA’s largesse? Having indeed also pocketed much of the reported $5 million (cheap at the price?) bestowed by Bin Hammam in his Qatar vote buying.

How predictable it was that Blatter, clearly deciding that attack was the best form of defence, should accuse the British media of “racism and discrimination.” Which he assures us “really makes me sad.” The shameless old hypocrite!

He talks of “those in the world who want to destroy FIFA.” But what other alternative is there to the 40-year reign of corruption which followed the Presidential election of the appalling Joao Havelange at Frankfurt in 1974?

FIFA as it so amorally stands is beyond any kind of redemption, an Augean Stables with no Hercules to cleanse it, a putrescent sink of corruption.

The fact that every member, however minuscule, however eager to receive the bounty FIFA offers, has the same single vote means that whoever controls the FIFA finances can never be outvoted, no matter if the major European countries are at one with their desire to cleanse and change.

What now can we expect from the coming – still all of six long weeks away – of the prominent American lawyer Michael Garcia? How horribly significant that he should bow to the wishes of Blatterism and agree to truncate his investigation before the start of the World Cup tournament, without remotely having time to investigate the shocking revelations of the Sunday Times investigation; though he tell us he has noted them? And without even interviewing Bin Hamman.

And this is what Professor of law Scott Horton of Columbia University has said of Garcia:

“The one thing that could be predicted with utter confidence on the basis of Garcia’s professional career is that he would zealously protect whoever appoint him and paid his bills. He might actually go after corrupt figures, but only to the extent it served the agenda of the person who appointed him.”

Et tu, Brute! And you Brutus! Was the cry of Julius Caesar in Shakespeare’s play, as his supposed ally Brutus takes part in his assassination. And it is now tempting to cry, And You, Platini, and you, Beckenbauer! As distressing and embarrassing facts are shown up by this same devastating inquest.

We already knew of course since he never disguised it that Michel Platini, a great footballer but a dismal administrator, had voted, though President of UEFA, for Qatar in summer, then readily supported the notion of playing the tournament there in winter, away from the excessive 50 degree Fahrenheit heat, whatever chaos might thus be visited on the European clubs he is supposed to represent.

But now from the Sunday Times inquest we learn that Beckenbauer, who was recorded as saying that Qatar should be given “a fair chance.”

We now know that Beckenbauer in October 2009 the year before Qatar was awarded the World Cup travelled to Doha the capital of Qatar together with a lobbyist one Fedor Radmann at the quest of Bin Hammam, who took them to meet the Emir. Two years later, in May, Beckenbauer met Bin Hammam in London. In June he and five others, connected with the ER shipping firm for whom he is now a consultant, were guests of Bin Hammam at the Four Seasons hotel in Doha.

And what of the award of the 2018 tournament to Russia, despite the appalling racism endemic in Russian football and FIFA supposed crusade, what hypocrisy, to “kick it out?”

The Sunday Times investigation has also established that Bin Hammam visited Russia’s virtual dictator Putin in Moscow where oil and gas matters were discussed. England as we know received just a solitary vote, beside their own, for the 2018 World Cup, so all that nauseating attention given both by Prime Minister David Cameron and even Prince William to the repugnant Trinidadian Jack Warner – absurdly described in some British media as a power broker rather than a scoundrel, well known to have been courted by Blatter (correspondence has shown he could get, as boss of CONCACAF, pretty well anything he wanted out of him) went for nothing.

It is now estimated that if and when the tournament be taken away from Qatar hugely expensive legal action would ensue. It is reported that Qatar and other nations signed a registration document, agreeing they would not challenge the bidding process in the Swiss civil courts leaving, however, the Swiss Court of Administration for Sport as a alternative.

Billions of dollars, say the experts, would be involved. Qatar surely has them. FIFA, for all the immense profits it makes from World Cups could, it has been conjectured, be ruined. Which seems the only desirable and positive outcome from this wholly shoddy business.

With FIFA bankrupt perhaps we could begin all over again, presumably with the European countries formidable block that might well exclude Afro-Asia. Meanwhile, pessimism reigns.