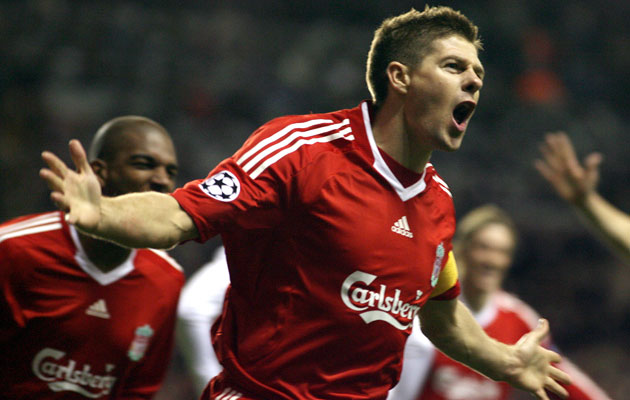 With the departure from Anfield of Steven Gerrrd, still supreme against Wimbedon, a Liverpool era has indeed closed and it is all too likely that we shall not look upon his like again.

Yet amidst the cascade of eulogies, there have been certain strange omissions. Not least regarding his England career and the way it was blocked and blemished by the crass failure of managers to reconcile the dualism between himself and Frank Lampard. Time and again, the two of them were picked together. Time and again it was all too plain that far from aiding and abetting one another, they tended to cancel each other out.

I never did think of them anyway as equivalent players though both could loosely be termed midfielders; that sloppy classification which all too often has even been used to denote wingers. Especially under the tutelage of the disappointing and grotesquely overpaid Fabio Cappello Gerrard, who was one of England’s few successes in the German World Cup, was all too often and absurdly stuck out on the left flank.

No winger at all, and on his “wrong” foot, leading him all too often to come inside, leaving space on that flank for the opposing full back to overlap. It was an absurd waste of a fine player who had distinguished himself as a goal scorer in Germany, and a cowardly compromise which suited neither player since Lampard though at least deployed in his proper position, made scant impact.

Perhaps the apotheosis of Gerrard’s long career – he had been taken on by Liverpool as a seven year old – came in the Final of the European Champions Cup in Istanbul in 2005. Three goals down to Milan at half-time, with the sprightly Brazilian Kaka driving driving through great holes in the Liverpool midfield, left bare by Rafa Benitez’s absurd tactics, Liverpool seemed down and out.

There was a reportedly loud chaos in the Liverpool dressing room at half time, but out of it came sense and salvation. Dieter Haman the German international midfielder was belatedly sent on to shadow Kaka, the Brazilian was subdued and inspired by a dynamic Gerrard, Liverpool proceeded so dramatically to turn the tables.

Gerrard, the acme of an attacking wing half, proceeded to head a goal. Two more followed and in added time, Liverpool won the game and the Cup on penalties.

Subsequently and most surprisingly, there were strong rumours that Gerrard was preparing to leave Liverpool for Chelsea. It didn’t happen, the word being that Gerrard’s uncle, a devoted Liverpool fan, had persuaded Gerrard to change his mind. But it was also rumoured that he had been threatened by hard elements among the Liverpool fans – and even criminal elements within the city – with violence were he to leave Anfield.

At all events, he stayed.

A curious episode followed his superb performance at Gallowgate where Liverpool defeated Newcastle United. On his return to Liverpool he visited a club where he had an altercation with a part-time disc jockey, who claimed with alleged facial evidence that Gerrard had struck him. Gerrard forcefully denied it, and when the case came to a Liverpool court, Gerrard was acquitted.

More recently, his fortunes for the club and country have been mixed. Playing late last season at Anfield against Chelsea, with the clubs neck and neck for the Premiership, Gerrard catastrophically slipped, allowing free passage and an easy winning goal to Chelsea.

The ensuing World Cup tournament in Brazil was a sad anticlimax. Both in the games against Italy and Uruguay, he gave away a costly goal. It could have been argued that at this late stage of his glittering career, with an inevitable physical waning, his designated role exposed him to difficulty. T

he departure of the prolific Luis Suarez after his biting episode in Brazil severely weakened the Liverpool side. Gerrard wasn’t even sure of a regular place, and it was sad – though he was still capable of converting at Anfield a brace of dubious penalties – to see him on the margins of a club he had served so supremely and influentially well.

That he will play on in America can be seen only as a sad anti-climax. Ideally, one supposes he would in due time return to manage the club which he adorned for so long.

What possess BBC Match of the Day to enlist Jimmy Bullard as one of the co-commentators? Scruffy, dishevelled and open necked – a fact emphasised by Alan Shearer’s for once donning suit and tie – he was an unprepossing sight.

Yet he didn’t deserve the fatuous put down in Private Eye, criticising him in I’m A Celebrity, and saying as a player he was barely worthy of (fictitious) Neasden reserves.

At his Fulham best he was one of the most dynamic midfielders in the Premiership, deservedly called up for the England squad, and still a force when much injured he moved to Hull City.

How Fulham could use him in their present sad plight.

Where do the Beeb get these sports radio correspondents? I’ve just heard one say that Wimbledon moved to Milton Keynes in need of a bigger stadium. In fact their own Plough Lane Stadium was sold under their feet by the ineffable Sam Hammam.