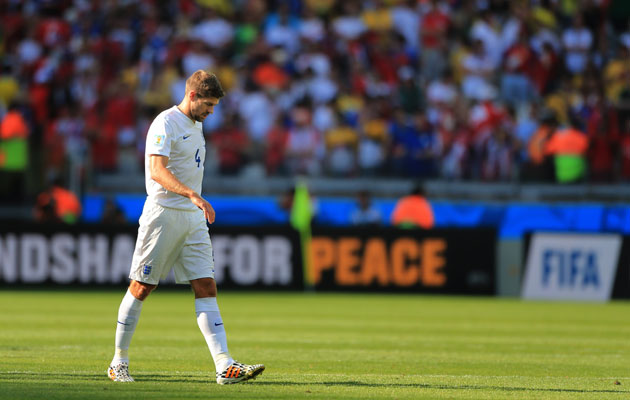 It was hardly surprising, though sad, that Steven Gerrard should have now given up playing for England.

The World Cup was a bridge too far; his two lapses against Uruguay each, alas, led to a goal, and a player who for so long has been seen as a bulwark of the England team had at last become a liability.

At his impressive best, which was largely with Liverpool, not least when they won that breathless European Cup Final against Milan in Istanbul, Gerrard has unquestionably been one of the salient players of his generation.

It was hardly his fault that successive England managers failed wretchedly to solve the dualism between him and Frank Lampard with Gerrard, palpably against his own wishes, being absurdly forced out on his wrong foot on to the left wing.

A Liverpudlian who has often proclaimed his love and loyalty for the club, there was nevertheless a few years ago what seemed a well-sourced story that he had decided to sign for Chelsea; but had then changed his mind under local pressure. The nature of which was ambiguous.

But Gerrard stayed, continued to flourish, and when he was literally pursued by a notorious thug demanding money, another bigger more minatory criminal intervened to protect him; to be thanked by Gerrard’s father when that gangster came up for judgement. As it transpired, the man escaped from the court, though he was later recaptured.

And when Gerrard himself was put on trial for allegedly hitting a disc jockey in a venue he frequented hours after giving a superb performance at Newcastle United, he was exonerated.

Comparisons have been made between him and Paul Gascoigne, but they seem wholly irrelevant. Gascoigne at his best was in essence a superb inside forward with almost every gift you could imagine save perhaps speed. Gerrard for me, however often he switched roles, was essentially in the grand tradition of wing halves.

Great obloquy has descended on the head of Jack Wilshere after the Arsenal playmaker, arguably England’s one and only, was caught on camera smoking a cigarette by a hotel swimming pool in Las Vegas.

Wilshere, it’s true, has had his turbulent moments off the pitch, but it was something of a relief to see his Arsenal manager Arsene Wenger, who at first seemed deeply displeased, subsequently kicking the affair into the long grass.

If Wilshere did as photos showed smoke cigarettes and even a cigar, he was surely in essence the victim, for all his humble apologies, the victim of history, rather than morality. For in bygone years and not such distant ones at that, football people smoked abundantly.

Gerson, the left footed motor of a brilliant Brazilian World Cup attack in 1970, was said to smoke over fifty cigarettes a day. Cesar Luis Menotti, alias El Flaco, The Thin One, once a player with a fearsome free kick, manager of the winning Argentine World Cup team of 1978, was a chain smoker.

And now though hardly with bated breath, we await the report on FIFA, Qatar and the 2020 World Cup from the American lawyer Michael Garcia.

Which at the urge of FIFA was hastily truncated just before the World Cup could begin, days before the devastating revelations in the Sunday Times provided chapter, verse and guilty names of those on the relevant committee who had received some of the £3 million dished out in bribes by Bin Hammam. The leading Qatar administrator who had so recently stepped out of the actual role, enabling the Qatari, defying all the evidence, to say, “Not us, Guv.”

Garcia has at least embarrassingly and distressingly seemed to “out” Franz Beckenbauer when it was learned that Der Kaiser, who both as masterly player and World Cup winning manager had been such a towering figure in world soccer, had accepted the hospitality of Bin Hammam both in Qatar and in Europe.

Beckenbauer at first refused to give evidence to the inquiry then he changed his mind. We wait to see what has since transpired but the disappointment of it all is poignant.

Michel Platini, previously and openly, as President of UEFA, had not only endorsed the choice of Qatar for 2020 but had even against all European logic actually supported the idea of switching the 2020 Word Cup from the broiling months of a Qatari summer to winter, with all the inevitable turmoil and confusion which would be endured by the very clubs Platini is meant to represent and protect.

The ineffable Blatter whinged to a meeting of complaisant non-European federations during the World Cup that racism was at the bottom of the Sunday Times’ revelations, a pathetic piece of chicanery.

The sad truth is that FIFA is beyond hope, morality and reform. That the World Cup was an undoubted success, wholly overshadowing the shocking revelations, is hardly relevant. That surely was despite FIFA, rather than because of it. What next, what now?