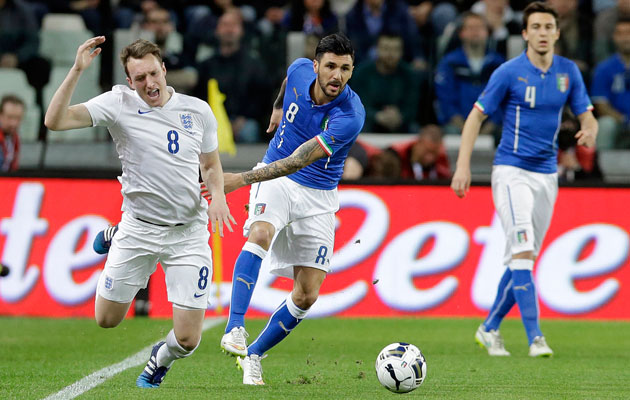 One shocking early moment seemed to encapsulate the problems of Roy Hodgson and his England team when they recently played Italy in Turin.

It was when the burly Italian defender Giorgio Chiellini suddenly advancing from the rearguard up the left having previously and almost predictably flattened England’s young Harry Kane in the opening phase, strolled past England’s Phil Jones as if he were a combination of Messi and Maradona, to set up Italy’s opening goal.

Roy Hodgson had chosen Jones in what might be described as a king of guard dog role in front of the England defence. Tactically and technically, it had gone hopelessly awry. It would take England a long time to recover.

In that struggling first half, Jones’ deployment was by no means the only error of selection. What remote logic was there in using Arsenal’s Theo Walcott as a central attacker? True, this is a position which Walcott himself, best known as a rapid outside right, has coveted in the past. But given that he had only just returned to the Arsenal team, and that for limited periods, recently after a long spell out with injury, it seemed all too inevitable that he would make such scant impact.

It was not till the second half with England still a goal down against an Italian team which lacked that elegant strategist Andrea Pirlo, who has tormented England defences in the past, the forceful midfielder Daniel De Rossi and, till the last stages of the game, surprisingly, Paris Saint-Germain’s in-form Marco Verratti, that the tide began to turn.

Much of this had to do with the arrival in deep midfield of Michael Carrick, with his economical use of the ball, even if there be those critics who insist that Carrick is what might be called a blast from the past, a player who “had his big chance and blew it. In nine appearances in competitive tournaments, Carrick has been on the winning side only four times, twice at least making little impression.

At least you can say of Walcott that unlike Carrick that he at least had a dazzling game against Croatia, on an irresistible night in Zagreb, when he tormented the Croatian left flank defence: from outside right.

Overall, it was Frank Lampard and Steven Gerrard, though the two arguably didn’t dovetail, who filled those central midfield roles for England both getting many more goals than Carrick has done. Hodgson might respond that Carrick represents what the French call faute de mieux, meaning for want of better. And indeed there are pitifully few English candidates for the position.

Hodgson might hope that when Jack Wilshere is at last fit enough to be playing regularly for Arsenal, he could fill that position. He is one of the pitifully few English players who can truly pass the ball and although ideally one would like to see him playing farther up field, he did have a successful game deeper at the back when playing for England in the 2-0 European win in Switzerland, the first in their qualifying group and the only one which presented any real challenge.

In the second half, Wayne Rooney, far the most talented and effective of English attackers, was able to move up from his position in advanced midfield. What turned out against the odds was an inspired substitution when Hodgson sent on the Spurs right-winger Andros Townsend, by no means a regular in the Tottenham team, but somehow galvanised when he plays for England as indeed he was in Turin, scoring a spectacular equaliser.

Hodgson, meanwhile, is still clearly in two minds about a second successful substitute in Everton’s young Ross Barkley, another who came on in the second half with lively effect. Back in the pre World Cup friendlies in Miami, Roy was reluctant to join in the praise for Barkley’s performances, saying that he took risks. And there was criticism recently from Ruud Gullit, such a dynamic star himself, when he remarked on television that Berkley tended to run around too much to limited purpose at the expense of energy. But he remains an exciting talent.

Chris Ramsey has lately been deploring the lack of black managers in the Premier Division, having stepped in at Queens Park Rangers when Harry Redknapp withdrew.

He has not always struck the right note, especially when he takes John Barnes as a victim. Fine player though he was, John failed sadly at Celtic and was hardly more successful elsewhere.

As I have said before, I’d be quite happy were every manager in the Premiership black. Ramsey himself made a confused and potentially disastrous job of QPR’s line up when they lost to Crystal Palace, exposing a callow right back to the menace of Bolasie, exhuming Shaun Wright Phillips after months of absence, periodically and inexplicably omitting Bobby Zamora, who scored superb goals at Sunderland and West Bromwich.

True at The Hawthorns, Ramsey fielded a far more rational and triumphantly successful team. But as things stand he might be best off rejoining Tim Sherwood, who wants him as assistant at Villa.