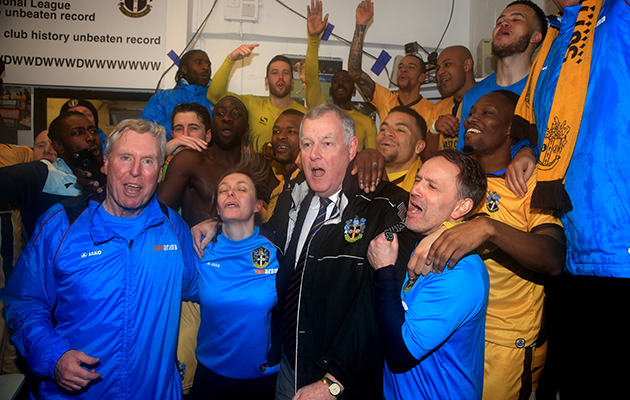 Though the Daily Mail was not immune from the general hysteria, it did commendably publish complete lists of exactly how many first choice players each of the competing 4th round sides left out. And what a list! Looking at that list is a pretty depressing experience. Brighton, who crashed at non-league Lincoln City, to the ecstasy of home fans, made nine changes.

Liverpool, beaten at home by a Wolves team adrift in the so-called Championship, made nine changes and were criticised for doing as much by Alan Shearer who cogently pointed out that they are well out of the money so far as the Premier League is concerned and have no commitments in Europe. In parenthesis, please note that 56,469 supporters turned up to watch that match at Anfield. The team that Jurgen Klopp put out was a slap in the face to such loyalists, and could almost be described as a fraud on the public. A very large public.

Ecstasy too at Sutton where beaten Leeds United, who once there under Don Revie won there in the Cup in a 6-0 canter, changed ten of their regular team. At Millwall, who in a previous round had thrashed a Bournemouth side completely filleted, took advantage of the fact that Watford – for no cogent reason given their modest league position – change seven of their players and brought on Troy Deeney, their essential marksman, far too late in the game to make any difference.

At least Gary Monk, the Leeds manager, had the grace and honesty to apologise to his fans, saying: “It’s a frustrating result and a frustrating performance. But it’s my responsibility. I’m the one who selects the team. I made a lot of changes. It didn’t work. It backfired.

Newcastle United, thrashed at Oxford, changed nine of their team, their eyes, understandably enough on promotion to the Premier League,

Manchester United and Chelsea have such a depth of talent that each could afford to make nine changes. Southampton and Arsenal each made 10, a game in which the Gunners ran out 5-0 winners, deploying a couple of very young but effective midfielders whose names were not even among the list provided by the pre-season leading football annual. 31,288 fans turned up to watch Southampton’s fiasco. Another case in which they could legitimately feel they had been cheated.

We all know that the Saints have won their way to the League cup final, but was such caution really necessary? Arsenal, who as it transpired, needed no excuses on the day, have a reasonable chance in the Premier League and European football to come, and one could barely quarrel with the overwhelming victory they had.

I was at Chelsea whose much-changed team was far too good for Brentford. No evidence of what the Italians call the Immutable Law of the Ex, whereby a former player always scores against his former club. Josh McEachran was a teenaged prodigy at Chelsea courted even by Real Madrid, but was seldom to be seen this time.

The FA Cup is the mother of all competitions, far preceding the Football League. Can the FA not do something to protect this precious and historic tournament? Is there no way to prevent teams – as was so long the case in the league – from fielding weakened teams? Yes, the underdogs have barked loud and long, but reality has gone by the board.

Full marks to Barney Ronay of the Guardian for investigating and exposing the moral squalor of Lewisham Council’s attempt to compulsory purchase the land around Millwall’s stadium, thus condemning them to eventual exile.

There are snouts in that trough and it is to be hoped that the Guardian’s splendid exposé, which has led to a postponement of the scheme, will see it laid to rest. The whole plan is surely outrageous and further revelations should put it properly to rest.