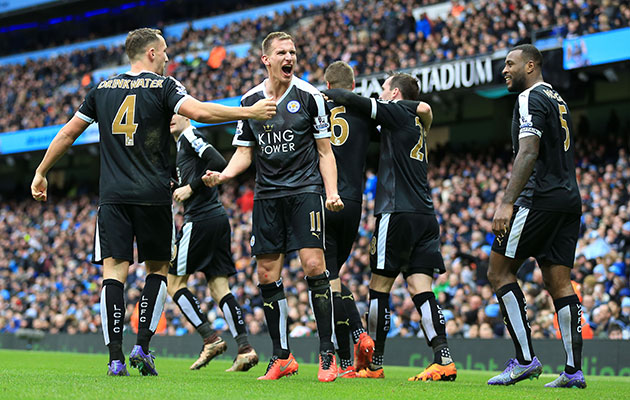 The wonder of Leicester City. I am fervently among those who hope they will win the Premiership but what does it all mean, how is it happening, what is the ultimate significance of this Jack The Giantkiller story?

On the highly positive side, it has to be stressed that Leicester have surpassed themselves, that they have reinvigorated a Premiership in which a handful of super wealthy clubs had long had things to themselves. Who could ever have anticipated that while Leicester soared into their impressive lead, mighty Chelsea with all the Abramovich billions behind them, would sink so low down the table?

But it must surely be conceded that Leicester’s glorious achievements however splendid in themselves cast a very cold light on the Premiership itself. A salient fact which was well and truly rubbed in when Leicester went to Manchester and humiliated City 3-1. City, who have spent millions like water, who whatever the cost of Kompany’s absence from defence, can boast a profusion of expensive stars.

Arsenal? They have a notional chance of overhauling Leicester to secure a Premiership which has eluded them for so long, but this is not an all conquering Gunners side such as we have seen in the past. Thrashed in Munich 5-1 by Bayern in the Champions Cup, torpedoed 4-0 at Southampton, recently marooned in a sequence of non-scoring matches before coming at last to life in Bournemouth.

As for Manchester United, though there have been recent belated signs of recovery, this has been under their Dutch manager head coach or whatever one now has to call them a still worse season than under his unhappy predecessor, David Moyes.

Louis Van Gaal, with Jose Mourinho now snapping at his heels, insists unconvincingly that recent improvement is down to him, where Wayne Rooney suggests that it is the players themselves who have turned to a more adventurous, far less carefully cautious, style of play.

So to a certain extent I feel that Leicester’s success, however heartening and impressive, has to an extent been by default.

Despite the colossal sums of money engendered by the Premier League – among whom Leicester have been such admirably economical and successful spenders – the Premiership overall has been a dismally mediocre affair, evidenced not only by Leicester’s prowess but by the dismal results in the European Champions Cup.

You might see the prolific Jamie Vardy as the very emblem of Leicester’s triumphs, as well as a symbol of hope for players who may seem to have fallen by the wayside. 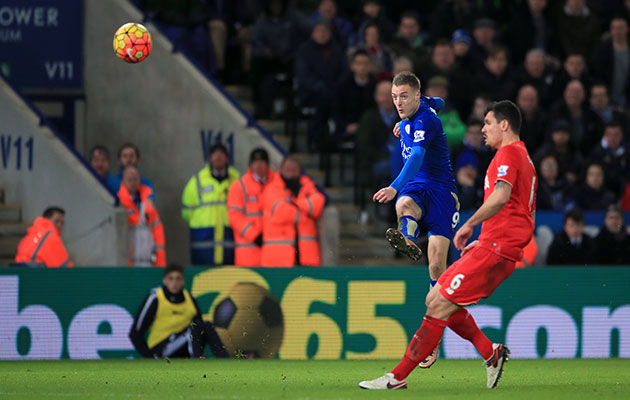 In an age when clubs are snapping up players as young as 10 or 12, Vardy proves gloriously that even today a refulgent star can rise from the depths. His local club Sheffield Wednesday turned him down in virtual boyhood, seemingly because they thought him too small, an all too recurrent motif in English football history.

He then as we know made his way painfully – literally, when called to do back breaking work in a factory – through non-League obscurity – Stockbridge Park Steels, Halifax Town, Fleetwood whom he galvanised with his goals – till Leicester took him on.

Now his astonishing pace, his sheer initiative, his deadly finishing, has made him surely the most effective attacker in the Premiership. There is even talk, alas, of an American company making a film of his career, written by someone called Adrian Butchart, responsible nine years ago for two dismal features each called Goal.

Here I confess an interest, having written and helped to edit the official 1966 World Cup film Goal! Which enjoyed a generous response. Butchart even claims to have One Direction singer Louis Tomlinson to play Vardy.

It wouldn’t work. Such football films never do. There is no way to simulate the remarkable feats of Vardy on the field.

Off the field there is scant indication that his life would be sufficiently dramatic. If a film is to be made it should surely be a documentary in which his electric goals would be the centrepiece and those who figured in his career from first to last could be interviewed.

Meanwhile, colossal credit to Leicester and their scouts for the players they’ve recruited. Steve Walsh very much to the fore; he brought in Vardy, the elegantly incisive Riyad Mahrez and the dynamic N’Golo Kante.

Meanwhile, Claudio Ranieri has instilled a shrewdly relaxed training system with no excessive emphasis on tactics. “They so need to be relaxed and not harassed,” says the Italian.

He says he always tells his players to find the fire within themselves and has surely succeeded in a way which makes his previous disastrous spell in charge of the Greek international team a dismal memory. 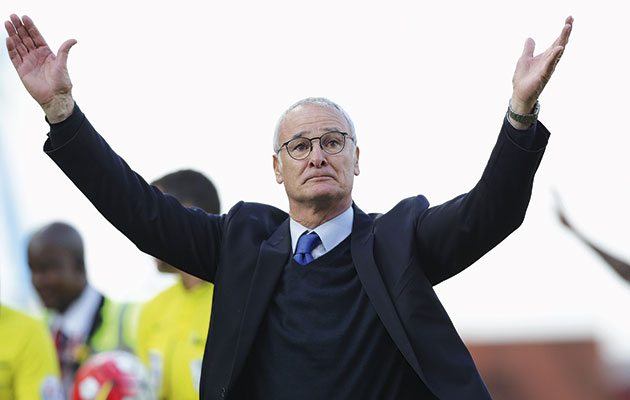 Coach Claudio Ranieri has been a calming presence behind Leicester’s success.

Leicester have just lost one of their talented scouts, Ben Wrigglesworth, to Arsenal but under Steve Walsh the scouting systems looks secure. Mahrez has been patiently encouraged and improved until he is now, with Vardy, the exciting cutting edge of the dashing attack.

To bring Robert Huth, twice scorer at the Etihad, from Stoke was a coup. Christian Fuchs, the Austrian international defender, another.

Meanwhile, the “giants” of the Premiership stand shamed.