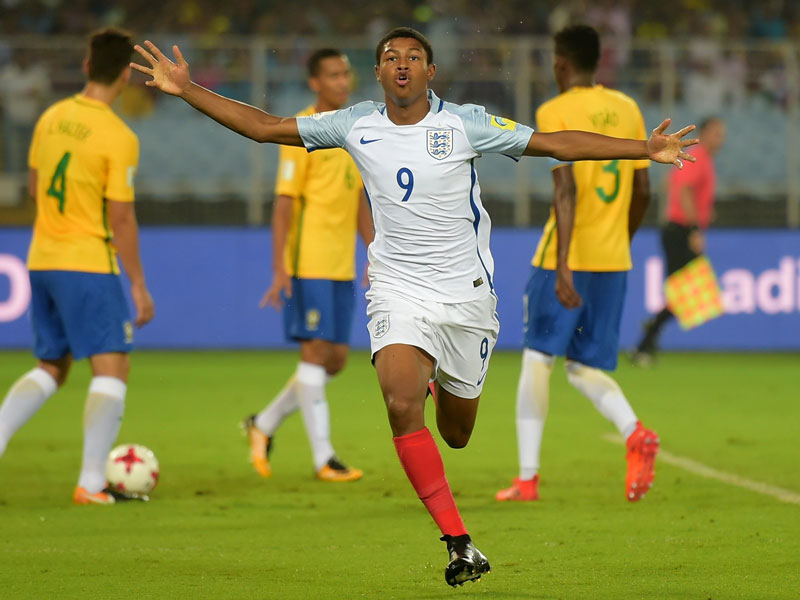 England and Brazil squared off in Kolkata on October 25th 2017 in the semi final of the World Under-17 Cup, for a match that turned into a tale of two centre forwards.

Brazil’s Lincoln had terrified defences in the earlier rounds, but against stronger opposition he was unable to make much of an impact. Bulky and one footed, he looked like a blunt instrument – especially in comparison to England’s striking rapier Rhian Brewster, who helped himself to all three goals as England won 3-1.

A little over two years later they could have met again, this time in Doha. Their clubs, Flamengo and Liverpool, faced each other in the final of the Club World cup.

Brewster’s team won. But this time Lincoln held the advantage. At least he got on the pitch. He was an extra time substitute, sent on in the quest to equalise Roberto Firmino’s goal. And it so nearly came right. Flamengo’s clearest chance of the game came right at the end, and it fell to Lincoln. He was well placed to meet a cross from the right. But he skied over the bar.  At least he was there to miss it – as Rhian Brewster may well have been pondering. He had not even been included in Liverpool’s squad.

Over the past couple of years Lincoln has been picking up valuable experience with Brazil’s most popular club, the reigning domestic and continental champions. True, he is most often used as a substitute. Even so, he is coming off the bench in big games in front of huge crowds, and has helped himself to some important goals.

Brewster, meanwhile, has made very little impression on the Liverpool first team. Injuries have not helped. But so far he has been restricted to the Carabao Cup and a few minutes off the bench in the FA Cup. A loan move has just been fixed up for him – he joins Swansea City, where he will team up once more with Steve Cooper, the coach from the 2017 Under !7 World Cup win.

But this does not necessarily mean that Rhian Brewster is making so progress, or that Lincoln has overtaken him and is now the better player. The difference in the dynamic of their careers reflects their contrasting circumstances. One is on the periphery of the global game.  The other is at the centre, where the competition for places in much more fierce.

After Liverpool had beaten his team in that Club World Cup final, Flamengo’s Portuguese coach Jorge Jesus hit the nail on the head. His team was made up of the best players available in Brazilian football. His opponents could pick from the best in the world. To get a game in the Liverpool first team, Rhian Brewster has been up against top players from Egypt, Brazil and Senegal (the much vaunted Salah-Firmino-Mane front line) plus Belgian international Divock Origi.

Lincoln does not face that level of internal rivalry. The reality of South American football, even at the biggest clubs, is that the constant selling of talented youngsters opens up space for the next generation and accelerates their progress.

There is an excellent example at Penarol of Uruguay, the first winners of South America’s Copa Libertadores. Last year saw the explosion on 19 year old winger Brian Rodriguez. Going into 2019 he had played just a handful of games.  So well did he do when given his chance that he established himself in the first team, got himself in the Uruguay side – and earned a move to Los Angeles in the United States.

This sale opened up space for Facundo Pellistri, just turned 18, who ended the year as the new sensation of Uruguayan football. Fluid in his movements, with two fine feet and extraordinary vision for one so young, Pellistri looks like a real find. But had Rodriguez not been sold, he would still be an unknown. There is a plus side, then, to starting out on the periphery of the global game’s western European dominance.