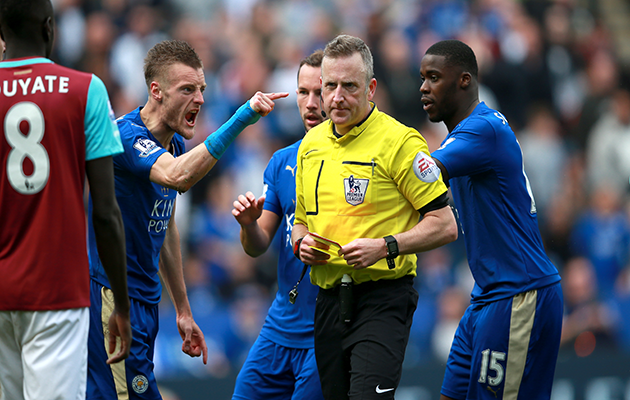 When will the days of bumping and boring, in racing parlance, in the penalty area be over? The torrid affair between Leicester City and West Ham United was all to dismal evidence that the situation is hopelessly out of hand, even if the referee Jon Moss was plainly an inadequate one.

He gave two spot kicks, one to each side, both probably justified though the very late foul by Andy Carroll on Jeffrey Schlupp seemed far less blatant than fouls which had been ignored before.

Just 18 minutes had been played when Leicester’s big German centre back blocked Hammer’s Winston Reid with his forearm, without let or hindrance. As against that, right on 90 minutes, Huth should have been awarded a penalty himself when the West Ham defender Angelo Ogbonna stopped him jumping in the box. Yet Ogbonna himself got away with two such fouls, the second on the embattled Huth, in the first half.

He himself of course was fouled as the two of them pursued the ball by Jamie Vardy who was promptly, and correctly, sent off in the most contentious and significant moment of the game.

When Leicester’s Wes Morgan plainly fouled Winston Reid in the area as a free kick flew in, a penalty was the correct decision.

Yet if Moss had an erratic match, he himself was surely the victim of the present reigning anarchy. The present lottery and sheer inconsistency can be phased out only if the referees receive clear instructions from Mike Riley, the head man, though memorable for a decidedly inconsistent display all those years ago when refereeing the Manchester United v Arsenal match at Old Trafford which cost the Gunners what would have been their 50th undefeated game.

Were all referees to take a draconian attitude towards any and every foul in the box, instead of pursuing what might be called a selective policy, there would surely be a quick end to the current mayhem. Meanwhile all is anarchy.

In that Leicester imbroglio, Andy Carroll both scored from a penalty for West Ham and almost at the death gave one away.

Meanwhile there has been some controversy over Roy Hodgson’s announcement that he does not mean to take him to the European Championships. The worst you can say about this announcement, as some have, is that it was premature, Roy plainly having been irritated by the recent clamour for Carroll’s inclusion after the goals he majestically headed at Upton Park against Arsenal. 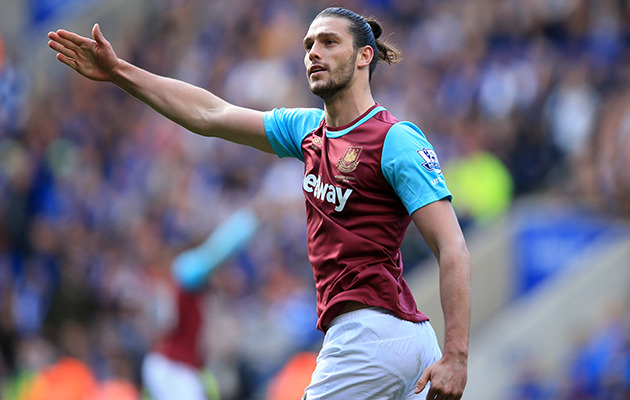 Calls for Andy Carroll to be in England’s Euro 2016 squad have fallen on deaf ears.

It is surely plain enough that Carroll does not fit into England’s present plans. Indeed it is a long time since an England manager was so spoilt for choice with his attackers. The continued excellence of Harry Kane, the bright emergence of Tottenham’s precocious young Dele Alli, the re-emergence now, at last, of Liverpool’s Daniel Sturridge and of course the dynamism and finishing flair of the remarkable late developer Jamie Vardy – even if he did blot his copybook against West Ham. You might call Carroll, with his power in the air, in the best sense an old fashioned centre forward, feeding on high crosses.

That is not the way the current England team play and you could hardly employ him as anything but what is now known as an impact player, brought on late when the goals are not coming. Plus of course, his sad propensity to injury.

Chelsea’s admirable youth team have distinguished themselves yet again by winning the UEFA Youth League, beating Paris Saint Germain in their final match. Yet under the arc which is inscribed with the words UEFA Youth League 2016 would it not be all too relevant to put instead ‘Abandon Hope All Ye Who Enter Here‘, over the entrance to Chelsea’s youth section out at Cobham?

Not since John Terry has a single Chelsea youth product gained a regular place, though at least big young Ruben Loftus-Cheek has been figuring quite regularly in midfield under Guus Hiddink, who seems more inclined to give youth its fling.

At present, moreover, the club are reported to have more than 30 young players out on loan!