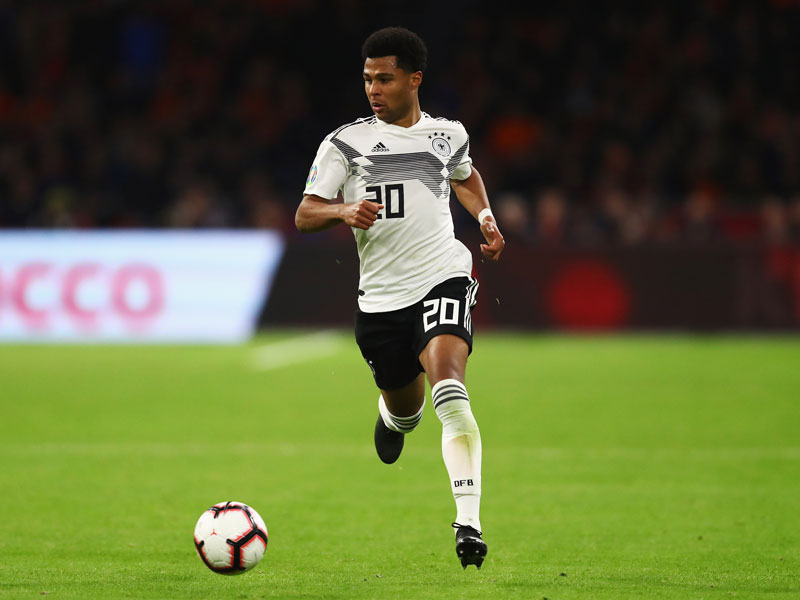 Only two-and-a-half years after ex-Arsenal manager Arsene Wenger declared him surplus to requirements – happy to sell him to Werder Bremen in 2016 for a paltry 5 million euros – Bayern and Germany forward Serge Gnabry has ended up having the last laugh.

The 23-year-old, who fired home a work of art goal in Germany’s recent 3-2 victory in Holland in a Euro 2020 qualifier, looks anything but a cast-off these days, enjoying an exceptional first season at Bayern and widely-tipped for a long and glittering Nationalmannschaft career.

As Bundestrainer Joachim Löw looks to freshen up his ranks, Gnabry, along with Manchester City’s Leroy Sane, should form the core of the rejuvenation programme. And not necessarily in the way most would imagine.

Although Gnabry and Sane generally are associated with incisive wing-play, Löw opted to deploy them as twin-strikers against the Dutch and for at least half the game, the cunning ‘double false nine’ plan worked a treat.

Throughout the first 45 minutes in Amsterdam, Holland’s high-price central defensive duo of Virgil van Dijk and Matthijs de Ligt found themselves in a novel situation – all at sea without a lifebelt. Frequently exposed by the mobility, pace and ingenuity of the German frontrunning tandem. Constantly pulled out of position. Never quite sure whether to stay or track.

Taking full advantage of the Oranje uncertainty, Sane would net a fine opening goal. Then Serge joined the fun, cutting in from the left, leaving Van Dijk for dead and curling a right-footed curler into the top corner. With the healthy strike-rate of five goals in six national team appearances, Gnabry clearly has it what it takes to prosper at this level.

“Serge played really well tonight,” enthused Low at his post-match press briefing. “His movement was incredible, he took on Van Dijk all night and physically asserted himself. His goal was top-class.”

To be strictly fair, Löw is not the first German coach to embrace the concept of Gnabry in a freewheeling role at the point of attack. Hoffenheim boss Julian Nagelsmann – who had Serge on loan last season from Bayern – often used him to good effect as a second striker.

A young player with a patchy record of staying fit, Gnabry believes he has found the answer in a vegan diet. No meat, no fish, no milk products or eggs. ” At the moment I’m enjoying it, ” he says. ” I’m feeling very good because of it. I just wanted to give it a try. I don’t know if I’ll stick to it for the long-term. ”

Long-serving Borussia Monchengladbach winger Patrick Herrmann, whose contract with the Foals runs out in a few months, is thought to be a transfer target for Schalke. Still only 28, the speedy former German international (capped twice in 2015), also is on the watch-list of a number of foreign sides, including Premier League outfits. A link-up with Schalke will tempt him, though only if the Royal Blues avoid relegation from the Bundesliga.