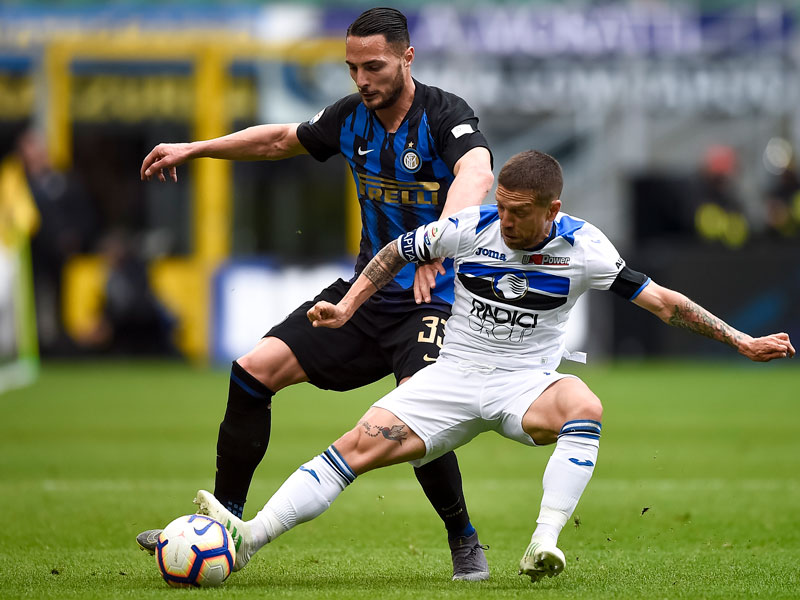 The Serie A title contest might have been over many moons ago but that did not stop last Sunday’s final day of the season from providing thrills aplenty as Champions League, Europa League and relegation issues all dominated a frenetic last night.

When the final whistle had blown, the seasonal verdicts decreed that it will be Atalanta and Inter, both on 69 points, who join Juventus and Napoli in the Champions League.   AC Milan on 68, AS Roma on 66 and Italian Cup winners Lazio will play in the Europa League whilst the three sides relegated to Serie B are Empoli, Frosinone and Chievo.

And mention of Atalanta takes us straight to the feel good story of the final day. These are heady days for a club that, until now, has been best known as a nursery garden for young talent. Atalanta’s third place finish is not only obviously their best ever but it also came at the end of a remarkable season when they played consistently good football. Not for nothing, Atalanta is the side which scored most goals, 77, in Serie A, as opposed to 70 scored by champions Juventus and 74 by runners up Napoli.

In keeping with the drama typical of the final day of the season, Atalanta, who were beaten two weeks ago in the Italian Cup Final by Lazio, at one point looked as if they were about to miss out on the Champions League prize too.

After 20 minutes, they were 0-1 down in their “home” game v Sassuolo (the match was actually played at Sassuolo’s Mapei Stadium in Reggio Emilia because Atlanta’s own stadium in Bergamo is currently undergoing partial reconstruction). Sassuolo’s Italian international striker, Domenico Berardi struck on the counter after 19 minutes of Atalanta dominance to apparently put a major spanner in the Bergamo side’s works. At that point, they were out of the Champions League.

As has been their wont all season, however, Gian Piero Gasperini’s side kept their cool to determinedly fight their way back into the game, running out eventual 3-1 winners. Admittedly, too, they were helped by a half-time brawl which saw Berardi, no less, being sent off. Arguably, even more critical to their comeback, however, was their Argentine playmaker, Diego Gomez, who scored one and set up the other two goals in yet another outstanding performance.

After the final whistle, the Mapei stadium rang out to the unmistakeable sounds of the Champions League anthem. As the familiar tones sounded, some of the 15,000 Atalanta fans started chanting:

The great Catalan giants are hardly shivering in their boots but if and when Atalanta draw one of the “bigs” next autumn, take nothing for granted. Some great European nights of the David and Goliath variety await.

However, more of that anon, when Atalanta’s immediate future plans become clearer and in particular when and if it is definitively confirmed that Gasperini will lead the club on its European campaign. In the last month, his name has been regularly mentioned as the possible new AS Roma coach, replacing caretaker Claudio Ranieri.

Atalanta’s win represented by no means the only drama of the final night. No game produced more of a cliffhanger than Inter’s 2-1 home win over Empoli. This was one of those double-headers in which the result mattered desperately to both teams. Inter needed a win to secure their place in next season’s Champions League, whilst Empoli needed at least a point to avoid the risk of relegation.

With the scoreline on 0-0 at halftime and with Atalanta drawing with Sassuolo and AC Milan winning away to Spal, Inter were in the Europa League whilst Empoli had avoided the drop. In a vibrant second half, however, Inter took their fans on a helter-skelter ride before snatching fourth place with just about the last kick of the game, in the process condemning valiant Empoli to Serie B.

Inter, who had begun the game like a side that meant Champions League business, finally earned some recompense for their domination with a good goal from Senegalese striker Diao Keita in the 51st minute. That goal should have put Inter totally in control but, ten minutes later, Inter’s confidence was shattered when Argentine striker Mauro Icardi missed a penalty.

Just when you might have expected Inter to completely crumble, however, the side came back at Empoli with a vengeance. Within five minutes, Inter were back on top through Belgian Radja Nainggolan who slotted home a Matias Vecino shot that rebounded off the post. In so doing, Nainggolan appeared to have finally atoned for what has been an injury interrupted, disappointing first season with Inter by scoring the goal that put them into the Champions League.

However, the drama did not end there. In an explosive final ten minutes of sturm und drang, Inter’s Slovenian goalkeeper Samir Handanovic endorsed his claim to have been the best Inter player on the night with a superb 92nd minute save. That had come just three minutes after hard pressed Inter defender Danilo D’Ambrosio had “cleared” yet another fast and furious Empoli attack by smashing it onto his own crossbar.

In the midst of the desperate injury time assault by Empoli, Inter then scored a third goal which appeared to settle the matter, there and then. With Empoli goalkeeper Dragowski having gone up for a corner, Inter cleared quickly to set up Croat Marcelo Brozovic for a goal struck into the empty Empoli goal from the halfway line.

Remarkably, the drama did not end there. As Brozovic scored his goal, his team mate Keita had pulled down goalkeeper Dragowski, involved in an impossible race to get back to his goal line. Brozovic would always have scored, whilst Dragowski had no chance of sprinting from one penalty area to the other in time to stop the killer blow. However, Keita’s foul left referee Luca Banti with no option but to overrule the goal, in the process sending off Keita.

That left Inter fans with a further two minutes of agonised suffering as Empoli once more stormed forward. In the end, Inter held on for their Champions League berth, leaving one to draw two conclusions. First, you had to feel sorry for plucky Empoli and their coach Aurelio Andreazzoli, a man who was sacked in November but then reappointed in March.

Secondly, you could only wonder what the Inter season would have become if the side had played all season long with the sort of urgency and determination shown for long periods of this game.

Inter’s moment of self-doubt, though, tells a tale. That came, of course, when Icardi missed his penalty, failing to put Inter 2-0 in front. At the end of a season destroyed by his contract wrangling with the club, there was a wretched sense of poetic justice about his failure from the spot kick in what was probably his last game for Inter. (Where Icardi goes from here is not clear but a move elsewhere now seems more than likely).

His “moment” contrasted sharply with that of goalkeeper Dragowski. This spring, Icardi’s standing has dramatically plunged from that of The Main Man to a semi-hate figure who was whistled off the pitch by many of his own fans on Sunday night. For 21-year-old Dragowski, this spring has seen him move in January from the total obscurity of the No. 3 goalkeeping role at Fiorentina to establish himself as one of the most promising ‘keepers in Serie A. Football gives and football takes away.

Football, too, has given much to AS Roma’s Daniele De Rossi who ended his 20 year long, one club career in Roma’s 2-1 home win over Parma. On an emotional night at the Olimpico, De Rossi was given a hero’s farewell as not only a packed stadium but also Roma “greats” of the past, Francesco Totti and Bruno Conti, gave him a warm salute. 35-year-old De Rossi is, reluctantly, leaving Roma but he is not retiring yet. Remains to be seen where he goes from here.

Final thought for now concerns Fiorentina, who finished a disappointing 16th in Serie A, just above the relegation zone. Weekend media reports claimed that US billionaire Rocco Commisso is interested in purchasing Fiorentina from the Tuscan leather goods tycoon, Diego Della Valle.

Italian born, US raised Commisso is, of course, the chairman of the New York Cosmos. Last year, he narrowly failed in a takeover bid for AC Milan. If he were to succeed this time with Fiorentina, he would increase the growing ranks of US owners in Italian football. Currently, AC Milan is owned by the Elliott Management hedge fund, A.S. Roma is backed by the Boston billionaire James Pallotta, whilst there are North American-linked ownership groups at Bologna in Serie A and at Venezia in Serie B.