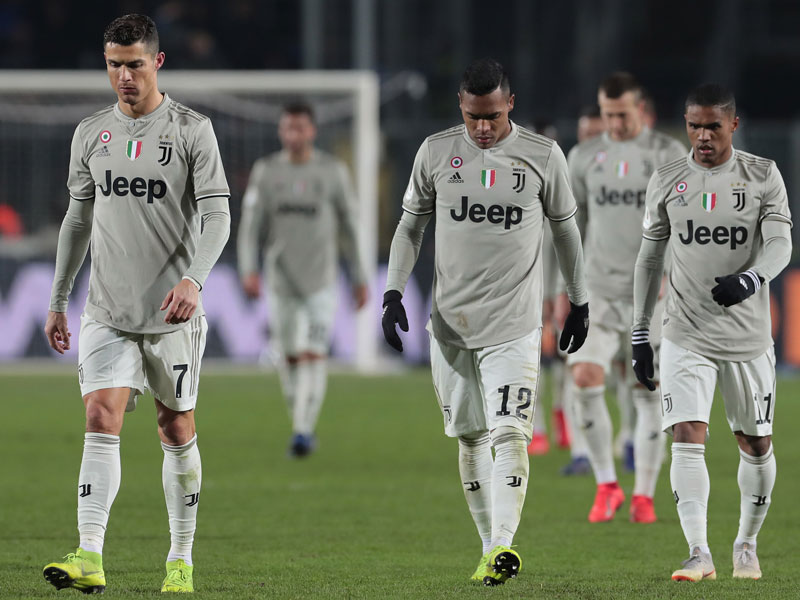 Shock horror, in the last week Italian champions Juventus have not only been knocked out of the Italian Cup, beaten a remarkable 3-0 by Atalanta, but they have also been held to an almost equally remarkable 3-3 Serie A home draw by mid-table Parma.

Commentators have not failed to point out that, with a difficult Champions League second round tie against Atletico Madrid just two weeks away, this apparent loss of form could not have come at a worse moment.

Against both Atalanta on Tuesday and Parma on Saturday evening, the Juventus defence was not its usually impenetrable, granitic self. Could this have something to do with the fact the infamous Juve “BBC” defence (Bonucci,  Barzagli and Chiellini) were missing for these two games, ruled out through injury?

In truth, one of them, Giorgio Chiellini did start against Atalanta but he lasted only 25 minutes before an injury-enforced substitution. Injuries to these three warriors are hardly surprising – Barzagli is 37, Chiellini 34 and Bonucci 31. All three have been out on the “hard road” for some while.

During the January transfer operations, however, Juve parted company with another of their experienced defenders, 31-year-old Moroccan Mehdi Benatia. He moved to Quatar club Al-Duhail for a reported €10 million price tag, plus a two and a half year contract worth €5 million per annum. With all the BBC currently ruled out, that now looks like a less than inspired move.

For the time being, Juve have replaced Benatia with another 31-year-old, the “journey man” Uruguyan defender, Martin Caceres, returning to the Turin giants for the third time in his much travelled career, one that has also involved seasons with Barcelona, Seville, Verona and Lazio.

Whilst it might seem easy to point an accusatory finger at a Juventus defence which has conceded seven goals in its last three games, one suspects that a certain “distraction” could explain their recent “superficial and lightweight”, as it was described by coach Massimiliano Allegri. Nine points clear of Napoli in Serie A and still unbeaten in the league this year, it is hardly surprising that Juventus, too, have finally had their moments of distraction, if not to say complacency. Then, too, no side can win all the time.

The point here, however, is not Serie A but rather the Champions League. This is clearly the competition that Juventus badly want to win. Ironically, it is not impossible that the performances (and the results) of the last week could yet still suit the purposes of coach Allegri, very nicely thank you.

As he prepares his troops for Champions League battle, he may feel that the Atalanta and Parma games have given his squad a salutory shock that will concentrate their minds greatly. Having things always go your own way is not necessarily the best preparation for what is arguably the most important game (so far) of your season. Any complacency on the road to Madrid has just gone out the window.

Complacency is hardly a problem that bothers Inter Milan, a side that seems stuck in a now annual, New Year meltdown. Like Juventus, they too were eliminated from the Italian Cup last week, beaten in a penalty shoot-out by a Lazio side that had been the better side over the 120 minutes.

That was bad but, much worse has been their Serie A form which has seen them draw 0-0 with Sassuolo and lose 1-0 to Torino and 1-0 to Bologna in their three games thus far in 2019. Sunday evening’s home loss to relegation battlers Bologna was especially painful, prompting as always widespread speculation that if Inter do not win or play convincingly against Parma next Saturday night, then coach Luciano Spalletti could be out of a job.

Such forecasts may be premature. To sack Spalletti now, for example, would cost the club approximately €20 million euro given that he has an annual €4.5 million contract that runs through to 2021. Secondly, the badly needed morale boost of a win against Parma, followed by a good Europa League run, starting with their second round tie away to Rapid Vienna next week, could quickly (if not easily) put the Inter season back on course.

What is true, however, is that many of the signs coming out of the Inter dressing room are not good. Since Inter’s disappointing failure to beat PSV Eindhoven in their final Champions League group game in December (and thus qualify for the second round), “things” have not always gone swimmingly. Star striker Argentine Mauro Icardi has become embroiled in a lengthy contract re-negotiation yet to be concluded, Belgian midfielder Radja Nainggolan has been fined and suspended by the club for “disciplinary” reasons, Argentine striker Lautaro Martinez has been fined for turing up late after his Christmas holidays whilst, finally, Croat star Ivan Perisic has made it clear that he wants “away”.

All these and more are problems sitting, for the time being at least, on the desk of Luciano Spalletti.  He will have his work cut out for him.

Final thought – the talented Napoli midfielder, Slovak Marek Hamsik, has come to the end of his Italian experience, playing the last of 520 games for the club in their 3-0 win over Sampdoria on Saturday night. After 11 splendid seasons with Napoli, 31-year-old Hamsik has signed for Chinese club, Dailan Yifang, for a €15 million euro purchase price and a three year contract worth an annual €9 million, after tax.

He says he will leave part of his heart in Naples.  His mind, however, has not surprisingly ruled that a contract of this nature at this late stage in his career is too good to refuse. Hard to dispute that.