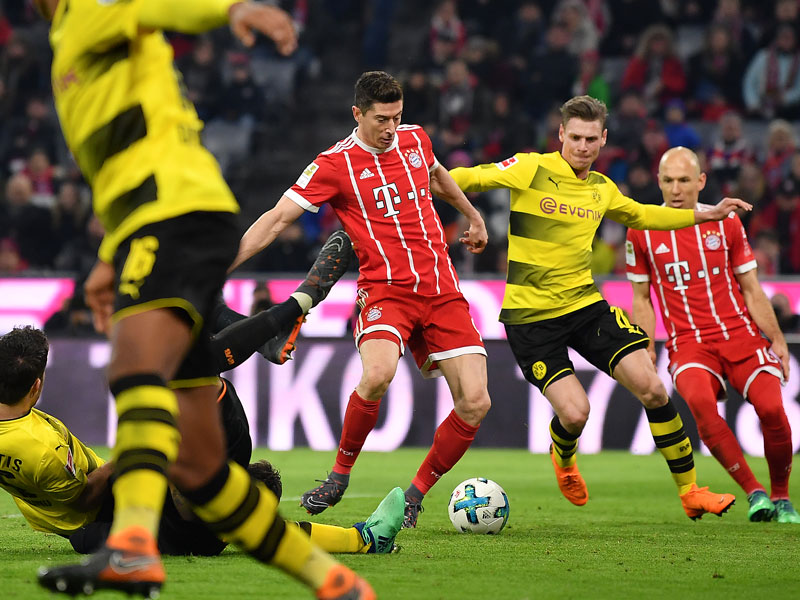 Are Deutschland’s Big Two, Bayern Munich and Borussia Dortmund, seriously contemplating quitting the Bundesliga and the Champions League to exclusively take part in a breakaway European Super League? Well, top German news magazine Der Spiegel certainly think so, claiming that 16 of the biggest clubs on the continent (11 ‘founders’ and five ‘initial guests’) have held secret talks about the project and could launch it as soon as 2021.
Der Spiegel, whose source is a whistleblower simply known as ‘John’, believe Bayern are one of the hardcore architects of the scheme and suggest that Dortmund will be piped aboard as one of the the add-on invitees.
Bayern, so the story goes, went as far as to commission international law firm Cleary Gottlieb in 2016 to look into the potential judicial consequences of what could well turn out to be a highly divisive and litigious affair. Could international and national football authorities sue Bayern if the latter withdrew from their competitions? Would Bayern continue to be obliged to allow its players to go on national team duty?
Predictably, the reaction of Bayern and Dortmund was to deny that a brave new world was in the works. Let’s move on, nothing to see here. “We stand totally by our membership of the Bundesliga and the same goes for UEFA competitions,” maintained Bayern chairman Karl-Heinz Rummenigge in an interview with Sky Deutschland. “We have never called it into question. This will be the case as long as I’m chairman of the board here.”
According to Dortmund CEO Hans-Joachim Watzke, the real drivers of the Super League bandwagon are Spanish heavyweights Real Madrid and Barcelona. “We wouldn’t abandon the Bundesliga for any other tournament on the planet,” exclaimed Watzke on Sky. “The Bundesliga is one of Germany’s cultural assets. We feel as right as rain in our championship.”
Inevitably, the leaked documentation has created one almighty stir in Germany. Hannover general manager Horst Heldt, for example, took the ‘good riddance’ line: “If Bayern want to leave (the Bundesliga) they should go. If they then discover that it’s not so great in a Super League and want to come back to us, they should then have to restart in our fourth division. “
Others see a major flaw in Bayern’s pan-European plans. “For the most part, Bayern lives off its dominance of the domestic market – both in a sporting and commercial sense,” Henning Vopel, a director at the Hamburg Economic Institute, told the Business Insider website. “If Bayern was to give up that position, it brings with it a financial risk.”
[collection name=”small” accordion=”mobile” excerpt=8]
What We’ve Learned This Week
1. A big boy did it and ran away.
Rock bottom of the Bundesliga with seven defeats in ten outings this term, Stuttgart are laying the blame for their car-crash start squarely at the door of Tayfun Korkut, the coach they sacked last month. Tayfun’s crime ?
The team’s alleged lack of fitness – always a useful stick to beat the last man in charge. “Physically we’re definitely not in the best shape,” declared the Swabians’ director of sport Michael Reschke. “In more or less all our games, our running stats have not been the best.”
2. Bullish in Leipzig.
No wonder RB Leipzig coach Ralf Rangnick is beaming from ear to ear these days. His young side are very much on a roll at the moment, unbeaten in nine top-flight fixtures, boasting the meanest rearguard in the country (only nine goals conceded) and now up to fourth in the table. The key to their success, says Rangnick, is the effectiveness of their pressing game. “When not in possession, the boys are doing a great job at hunting the ball,” says the RB interim boss. “It’s difficult to create chances against us.”
Don’t forget to follow World Soccer on Facebook and Twitter.