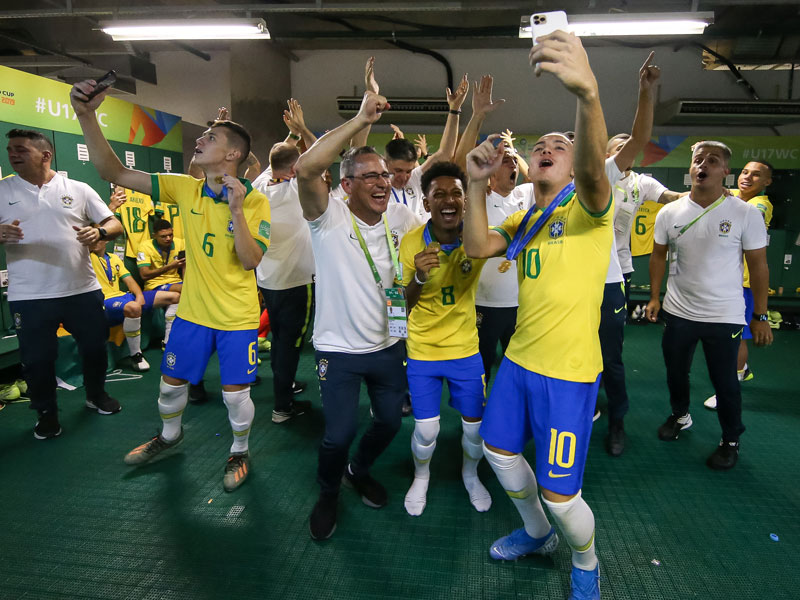 Seldom can home advantage have been more important to a campaign than Brazil’s Under-17 World Cup win.

Had the venue of the competition not been switched from Peru earlier this year, then Brazil would not even have qualified. They failed even to make the final six of the South American Under-17 Championships, and owed their place in the World Cup solely to the fact that they became the new hosts.

Their blow out in qualification was the result of an emotional collapse in the final group game, when they lost 3-0 to Argentina and crashed out on goal difference. The experience may well have done them good. There were certainly no emotional collapses in front of their own fans. On the contrary, time and time again they showed the strength of character to dig themselves out of a hole.

In the second round tie against Chile they came from behind to win. In the semi final against France they looked to be on the wrong end of a massacre. They were quickly two goals down against clearly superior opponents. But they fought back with heart and drive to make a magnificent game of it. At 2-2 France thought they had scored a late winner. It was ruled out for offside, and straight from the restart the Brazilian goalkeeper helped himself to an assist, booting upfield and finding substitute Lazaro, who made space to shoot home.

In the final against Mexico, Brazil were the better side, but were a goal down with less than 10 minutes to go. Still they found a way to win, equalizing from a penalty and then, deep in stoppage time, claiming the trophy when Lazaro came off the bench to strike home a sweet volley.

Winning a World Cup at any level is a welcome morale boost to Brazil, especially with the senior side having fallen into a post-Copa America rut. And there are some very promising players in the team who can look forward to a career of conquests – attacking right back Yan Couto and flying winger Gabriel Veron were consistently excellent. Centre forward Kaio Jorge had a good game in the final. Left footed attacking midfielder Pedro Lucas seemed to run out of steam towards the end of the competition, but it one to watch – and, of course, there is supersub Lazaro, who will forever be associated with this title.

Under-17, though, is far too early to jump to solid conclusions about long term careers. Ronaldinho remains the only player to have won the World Cup at both Under-17 and senior levels. Of the Brazil squad that last won the World Under-17 title, back in 2003, not one went on to play a competitive game for the national team at senior level.

And for all his admirable traits of sheer fight and flashes of talent, there was one disappointing aspect in Brazil’s play. The team continued with the recent practice of hulking, limited centre backs, sheriffs of the penalty area rather than modern defenders able to play in a high line and keep the team compact.

This has been a vice of the recent Brazilian game. At youth level it is probably based on a short term necessity to achieve results rather than running the risks necessary to develop players. It has filtered through to the senior ranks of the domestic club game. The Brazilian first division is littered with lumbering defenders who are happiest dropping deep to hide their lack of pace – thus stretching out the team and making it harder to play collective football.

The revolution caused by Jorge Jesus, the Portuguese coach of Flamengo, is underpinned by his daring to do something different. His defensive high line enables proximity between the lines of the team, which in turn makes possible a collective style of play based on mobility and swift exchange of passes.

It will take time for the lessons of this to be absorbed by the Brazilian coaching community. But in the long term it could well be that the successes of Flamengo this year (they have all but wrapped up the domestic title and next Saturday will dispute the Copa Libertadores title) will prove more significant than Sunday’s Under-17 World Cup triumph.