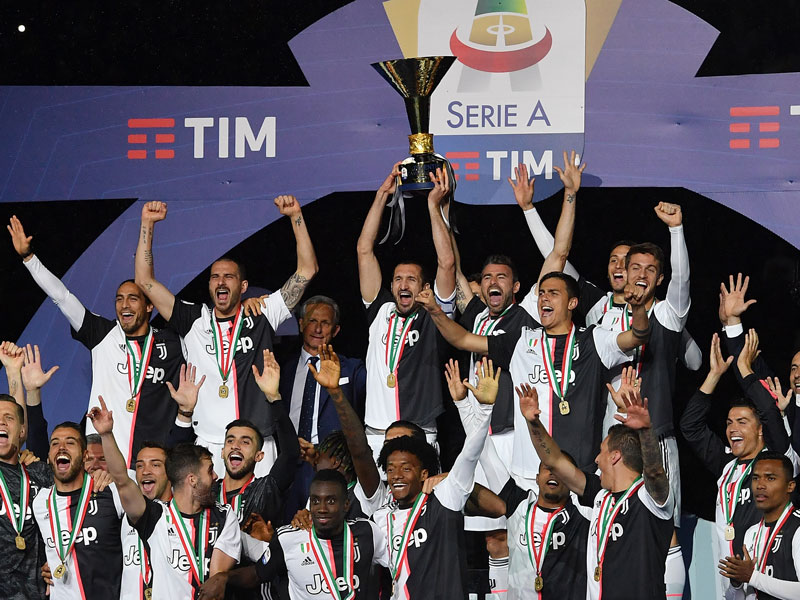 Paddy Agnew’s Notes From Italy: Can Anything Stop Juventus In Serie A?

So, the Serie A championship, the one that is won every year by Juventus, is about to kick off, is it? As the fans prepare for the opening game of the season, namely Juventus away to Parma next Saturday evening, many must be wondering what, if anything, can stop the Old Lady of Turin from lifting a ninth consecutive title.

Juventus were so far ahead of the rest in Italy last season that, at first glance, it seems impossible to oppose them. Furthermore, this season they have a hungry new coach in Maurizio Sarri, as well as some interesting new players including Dutch defender Matthijs de Ligt, French midfielder Adrien Rabiot, Welshman Aaron Ramsey and Brazilian Danilo.

On top of that CR7 Ronaldo is still around to lead the troops whilst charismatic goalkeeper, Gigi Buffon (42 next January) has returned to Turin after a year in exile at Paris St. Germain, presumably to fill the role of the wise old, honorary 12th man. What can stop them?

“Juventus are clearly the strongest team, they’ve won for the last eight seasons and, what is more, they have strengthened their squad…”

For those who would like to see Juventus knocked off their pedestal (and there are always plenty such people) we can offer only the following slim hopes. Firstly, there is the law of averages. Even Juventus cannot keep on  winning for ever…or can they?

Secondly, on the technical front, can even Ronaldo (who will be 35 in February) maintain his own high level of performance. During the pre-season friendly period, new coach Sarri observed that “Ronaldo is the best player we have”, adding that his job was really to organise the other ten players around him.

Sarri is too good a coach to rely on such a simplistic approach. He will have plenty other tricks up his sleeve but the nagging doubt about over-dependancy on a 34-35 year old may give the others some small hope.

Of course, Ronaldo is such a manically fit, serious professional that he may dumbfound us yet again. This week he told Portugal’s TV1 channel that he might play on until he is 40. He probably meant it too. In the meantime, there is still time for Juventus to make another important signing, such as Inter’s rejected “bad boy”, Argentine Mauro Icardi, before the market closes on Monday September 2nd.

That late market closing, with the first two days of the campionato already played, has predictably added an element of uncertainty. At this point, for example, it is still not clear where important players such as the Argentine trio of Icardi (Inter), Dybala and Higuain (both Juventus) will be playing in this new season.

If Juventus are the favourites, what about the others? Here, too, Roberto Mancini has some interesting thoughts:

“I see Napoli as the most dangerous challengers to Juventus. They have a very settled squad who have played together for a couple of years now…”

Mancini has a point.   It is only logical to suggest that the hugely experienced Carlo Ancelotti could mount a serious title challenge in this, his second season at Napoli? Having spent a season recalibrating the team and familiarising himself with the demanding Neapolitan environment, Ancelotti could be ready to strike.

Key players of the last two seasons such as Senegalese defender Kalidou Koulibaly, Brazilian midfielder Allan, the three musketeers up front – Spaniard José Callejon, Belgian Dries Mertens and Italian international Lorenzo Insigne – all add a sense of continuity. Remember, too, that Napoli have been the only club to seriously challenge Juventus in recent years, finishing runners-up in the campionato in three of the last four seasons. On top of that, this week the club confirmed the purchase of ex-PSV striker, Mexican Hirving Lozano

One of the most intriguing aspects of the new season, too, is the consideration that Juventus, AC Milan, Inter Milan and AS Roma all have new men at the coaching helm – Sarri at Juventus, Antonio Conte at Inter, Marco Giampaolo at AC Milan and Paulo Fonseca at Roma.

Sarri has hardly got off to a flying start, having gone down with pneumonia on the eve of the seasonal kick-off. Much will be expected of him and indeed of at least one of his “new boy” colleagues, namely the former Juventus, Italy and Chelsea coach, Conte. Will his manic turbo-drive manage to turn around arguably the most enigmatic, most under-performing Italian club of all time?

Can he work his magic with an strong looking Inter squad?  Inter have been active on the market buying such as Uruguyan defender Diego Godin (Atletico Madrid), Belgian striker Romelu Lukaku (Man United), Austrian defender Valentino Lazaro (Hertha Berlin) and Italian international Nicola Barella (Cagliari). They join a squad which already included Slovene goalkeeper Samir Handanovic, Dutchman Stefan De Vrij and Slovak Milan Skrinniar in defence. Remains to be seen how much Inter have lost with the departures of both Croat Ivan Perisic and, of course, of Icardi (that is if and when he finally moves).

Or can the young blood at AC Milan, Marco Giampaolo, replacement for Gennaro Gattuso, put the seven times European champions back on top? Unlike all his major rivals, Giampaolo will not have the distraction of European Cup football to upset his Serie A plans, given that UEFA have banned Milan from this season’s Europa League because the club failed to adhere to the infamous Financial Fair Play (FFP) regulations.

Despite all their FFP problems, Milan seem to have put together a useful squad, recruiting Brazilian defender Duarte (Flamengo), Algerian midfielder Ismaël Bennacer (Empoli), Bosnian midfielder Rade Krunic (Empoli) as well as Portuguese striker Rafael Leao (Lille). Up front, they can still count on the Spaniard Jesus Suso, Pole Krzysztof Piątek and Brazilian Pacqueta, whilst the defence will rotate around Alessio Romagnoli and star goalkeeper, Gigio Donnarumma. However, Milan still look as if they have a lot of catching-up to do.

What about the rest? Well, one thing not to miss out on is Atalanta’s Champions League debut, something that will give European fans a chance to watch 31-year-old Argentine Diego Gomez in action. To some extent, he sums up the Atalanta game – organisation, pace, intensity and skill.

However, it seems unlikely that Atalanta, who surprisingly finished third in Serie A last season, will have the squad strength to handle midweek Champions League games as well as their Serie A programme. Talented coach, Gian Piero Gasperini, will be called on to perform more miracles.

And the Romans? AS Roma have hired a new coach in former Shaktar Donetsk man, Portugal’s Paulo Fonseca. The good news for him is that the club have held on to Bosnian striker Edin Dzeko, Turkish front man Cengiz Under and last season’s boy wonder, Nicola Zaniolo.   The bad news is that there is no Daniele De Rossi in midfield. The Roma veteran, dropped by the club last spring, has gone off to Argentina to play for Boca Juniors, much to the delight of at least one Boca fan, namely Diego Maradona. Without De Rossi, though, Roma may lack identity and leadership.

Last year’s Italian Cup winners, Lazio, will probably hope for another good run in that competition. For once, coach Simone Inzaghi starts off with a relatively unchanged squad which includes key players such as the Serb midfielder Sergei Milinkovic-Savic, Spaniard Louis Alberto, Brazilian Lucas Leiva and Argentine striker, Joaquin Correa. Both the Roma teams, too, play in the Europa League.

As for the rest, no small curiosity will be focussed on mid-table Fiorentina and Torino. The great Florence club made headlines in early June when it was confirmed that the US billionaire Rocco Commisso, chairman of the New York Cosmos, had bought the club from the Della Valle family for approx. €165 million euro.

To the surprise of many, Fiorentina have thus far managed to hold onto to their talented Italian international striker, Federico Chiesa. Not only that but this week Fiorentina sprang one of the surprises of the transfer market when they picked up out of contract, 36-year-old Frenchman Franck Ribery, from Bayern Munich for €4 million euros. With Chiesa and Ribery up front, the Fiorentina fans could be in for some good times.

Two final thoughts – If they get past Wolves – admittedly a big “if” – Torino and their striker Andrea Belotti are unlikely to disappoint in the group stages of the Europa League.

The other final thought concerns 29-year-old Mario Balotelli who gets yet another “last chance” in his chequered career (Inter, Man City, AC Milan, Liverpool, Nice, Olympique Marseilles) when he lines out this season for relegation battlers Brescia, the city in which he grew up and where his mother still lives. Here is wishing him all the best in the hope that he can follow on from the example of Roberto Baggio who experienced a marvellous Indian summer moment at Brescia between 2000 and 2004, at the very end of his career.