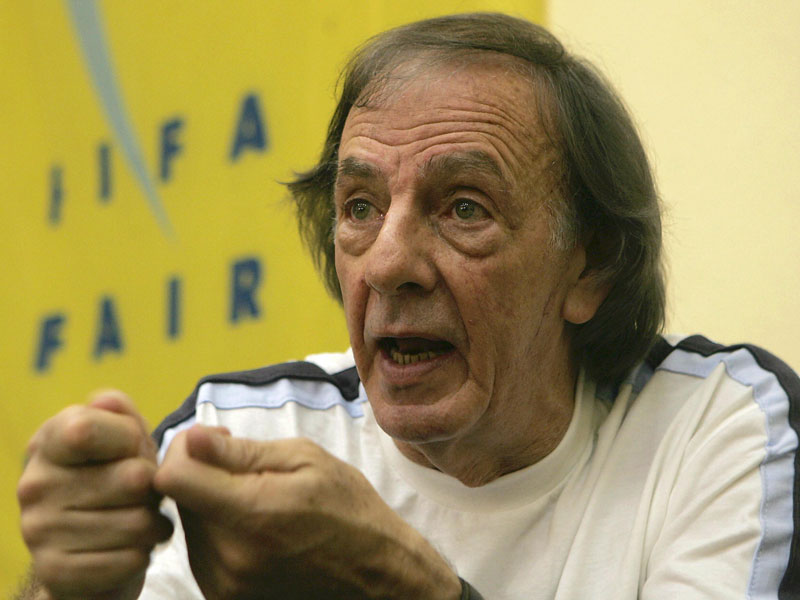 Argentina have appointed Cesar Luis Menotti to be the overall manager of their national teams. Menotti is now 80. When he was not yet half that age he took Argentina to their first World Cup win – an achievement that has consistently been under-rated.

Focus on that 1978 tournament usually falls on the fact that Argentina had home advantage – and on the allegations of shenanigans around the match against Peru, which Argentina needed to win by a four goal margin in order to make it through to the final.

There may been some sharp practice at a government level. And the organisation of the competition – whereby Argentina took the field knowing how many goals they needed – was obviously flawed.

But what is not in doubt is that the 1978 World Cup represents a before and after moment for the Argentina national team – and that much of that has to do with Menotti.

They had been off the pace in previous World Cups – not even qualifying for 1970 and humiliated by the Dutch in 1974.  Menotti brought them back to the top table.  Ever since 1978, even when they have come up short, Argentina have been seen as one of the teams to beat. This is because Menotti took care of both the big picture, and also the little details.

The big picture was the style of play. With their emphatic victories over the continent’s big three, Uruguay, Argentina and Brazil, Holland 74 appeared to have made South American football obsolete. How to counter the physicality of the new, dynamic northern European challenge? Brazil’s main response was to think in terms of bulking up and winning games on the counter attack. Menotti took a different route – that a traditional South American passing game could still be competitive – as long as they upped the rhythm of their play. This answered the big question – how should we play?

The other question – how to go about it? – took a more detailed approach. Menotti built not only a team from scratch, but constructed the very notion of a genuine Argentina team.

The country and its football remain very centralised around Buenos Aires, the dominant capital city. From Rosario, Menotti knew from personal experience how hard it was for a player from the provinces to be given an extended opportunity. So he formed a number of different teams – a youth team, for example, which went on to win the first Under-20 World Cup in 1979; and different teams from the provinces, so that players could ease their way into the national side in less intimidating circumstances. A wide range of players were identified and monitored, with the outstanding ones filtering through to the World Cup squad.

Perhaps the best example was a small, slight, shy midfielder from the city of Cordoba – Osvaldo Ardiles, who with his high tempo, fetch and carry game was crucial to Menotti’s gameplan.

The process of winning the World Cup took a lot out of Menotti – not least because while he was in charge the country suffered a military coup. A brutal right wing dictatorship took power. Menotti has always argued that the triumph was for the people, not the regime. But the strain was clearly immense. He himself points out how much he aged in the years between 1974 and 78 – although his chain smoking habit can hardly have helped. Then again, many coaches who won the World Cup back then, when it was unrivalled as the game’s biggest prize, appeared to have been burnt out by the experience.

And so the question now is what he will bring to the national team. It would surely be too much to expect him to have the same zeal for details as he showed 45 years ago. His thoughts on the big picture, though, remain clear and interesting – and herein may lie a problem.

Menotti has said that he will help the coaches develop their own ideas.  But there is no doubt which style he favours. He is enchanted with the possession based football of Pep Guardiola.

Until the Copa America this June, though, Argentina are stuck with the inexperienced Lionel Scaloni, who places himself in the opposing camp, that of the rapid counter attack. Their relationship could be interesting.

For the appointment of Menotti to be truly coherent, his first and most important task would have been to choose the coach of the senior side, and then support him through a year of friendlies followed by the Copa America, all building towards the next set of World Cup qualifiers. Instead of which, the big decision on Argentina’s next coach will have to wait until the eve of the qualifiers – an example of the disorganisation that reigned in Argentina before Menotti took over in 1974.