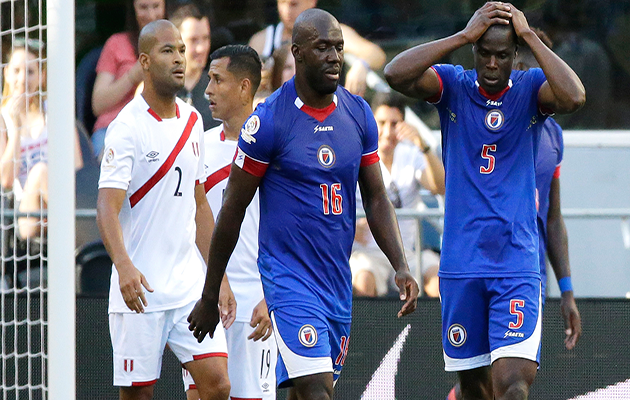 Perhaps the stand out image from the first three days of the Copa Centenario came when the final whistle blew on Peru’s 1-0 win over Haiti. Deep in second half stoppage time Haiti won a free kick. Jeff Louis dinked the ball in behind the Peruvian line, and substitute striker Kevin Fils Belfort, three yards from goal, looked certain to equalise. But he tried to make a little too sure of beating the keeper, and when it seemed easier to score he glanced his header just wide. It was Haiti’s best chance of the game. In fact, it was either side’s best chance of the game. But it was gone, and there was no time for redemption. A few seconds later the game was over and Belfort collapsed in a heap. He was consoled and helped off the field by some of his team-mates.

It was a touching sight and one that, in a way, went some distance towards summing up the start of the competition. In a tournament where so far 12 teams have played and only 5 have managed to score a goal, there has been more disappointment than celebration – and while Mexico against Uruguay was an enthralling game, and the first half of Brazil v Ecuador showed promise, much of the action so far has struggled to get out of first gear.

There are a few obvious explanations. In part it is the tournament version of first night nerves; the USA, for example, may well be capable of more than they showed against Colombia. Some of the kick off times have not helped – Costa Rica and Paraguay played out a predictable goalless draw in the sweltering afternoon heat of Orlando. Thankfully for the players, there are no more early starts – unlike the World Cup held in the USA 22 years ago, the start times have not been set with an eye and a half on European TV zones.

In the case of the weaker teams, there is a lack of quality on show. And, for those who played the European season, this tournament is almost certainly getting underway too soon. The extra week’s rest and preparation before the Euros may well make something of a difference. On the other side of the Atlantic, a number of players have been dropping out with muscular problems.

It will be fascinating to see how Uruguay react after letting in two late goals and losing 3-1 to Mexico. There are some ageing limbs in the Uruguay squad, and they had to chase a tiring, intense game after going a goal down early and a man down before half time. And they face the most punishing travelling schedule of all the teams in the competition, crossing the country from coast to coast after every match. Two years ago they made it out of their World Cup group after losing their first match to Concacaf opposition. Then they saved themselves, following defeat to Costa Rica with wins over England and Italy. On paper, Venezuela and Jamaica are less daunting opposition. But the circumstances are more difficult, especially if Luis Suarez is not yet fit to return.

Coming up tonight is a good test of the effects of post-season fatigue. Argentina play Chile, a replay of last year’s final and a game that should be one of the highlights of the entire group phase. Argentina’s quest to win their first senior title since 1993 is mainly based on their wonderful collection of attacking talent. Lionel Messi is already a doubt for this opening match. And it will fascinating to see how much gas is left in the tanks of Angel Di Maria, Gonzalo Higuain and Sergio Aguero, as well as Alexis Sanchez on the other side. Some of these stars may well exit the competition with the same feeling that Haiti’s Kevin Fils Belfort dragged off the Seattle field last Saturday, straining but not quite succeeding.