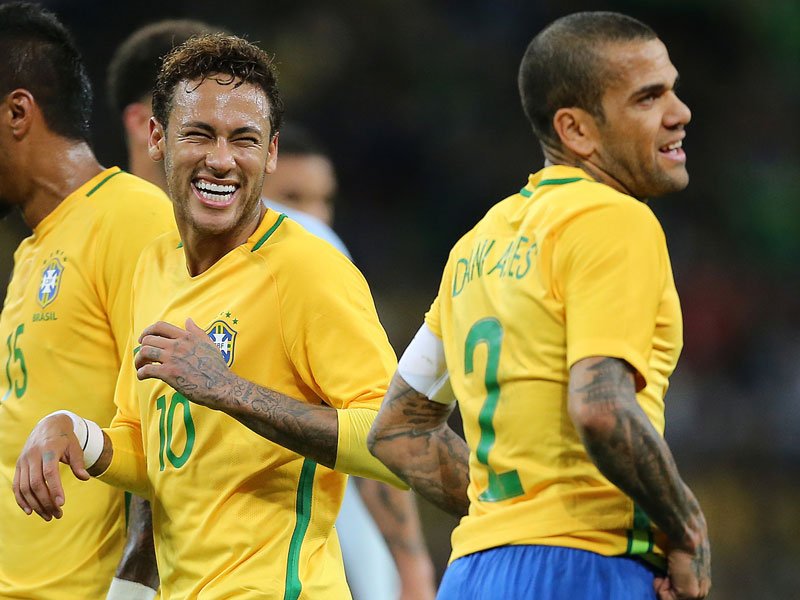 Neymar, it seems, will not be Brazil’s captain in the Copa America. Recently the Brazilian media were reporting that coach Tite will give the armband to right back Daniel Alves.

There are two ways of looking at this change, if indeed it goes ahead. On one hand it is clearly a punishment for Neymar. Before the squad was announced, there was considerable discussion in Brazil about whether Neymar should be included. Last September, when Juventus winger Douglas Costa was caught spitting at an opponent, he was left out of the next Brazil squad in punishment. Then Neymar was seen apparently snaking out an arm to strike a fan after the French Cup Final. It begged the question; would Tite adopt a similar criteria for main attacking star?

Neymar, of course, was named in the squad. But the coach was coy on the issue during the press conference, stating that a man to man talk would be needed. And, if local sources are to be believed, the content of that chat was that the player would no longer captain the side.  He has lost a privilege.

The other side of the coin is the recognition given to the importance of Daniel Alves. The veteran right back would probably have been Brazil’s captain for last year’s World Cup.  But he picked up an injury and missed the tournament. Tite continued with his practice of rotating the captaincy, then settling on Neymar in the aftermath of Russia 2018.

Daniel Alves is a more natural choice. His is a respected voice in the dressing room. Both at Barcelona and now at PSG, he is viewed as an important influence on Neymar. He is, after all, a player of vast experience who is nine years older than Brazil’s attacking star.

This perhaps begs a wider question; what is the justification for the selection of a 36 year old right back for the Copa America?

The answer has to do both with Brazil’s short term necessities, and with their more long term struggle to achieve the correct balance on the field.

For some the 2019 Copa is a time for experimentation, for building towards next year’s World Cup qualifiers.  Brazil, though, cannot go down that path. On all four occasions they have hosted the Copa they have won.  Nothing less will be good enough this time, especially after the recent run of poor tournament results. This, then, is a time for experience – hence the recall not only of Daniel Alves but also of Fernandinho.

Moreover, Tite has brooded on last year’s quarter final defeat against Belgium – and has come to the conclusion that his side were too open. The idea of switching Phillippe Coutinho from the front three to the midfield trio was a risk. Tite wants to persevere, either with Coutinho or with Milan’s Lucas Paqueta in that role.  This means, then, that to balance out his side he wants to change the emphasis of his full backs.  There is no place, for example, for Real Madrid’s rampaging Marcelo, a left back who clearly attacks better than he defends.

Rather than go with Liverpool style full backs – charging up the field like auxiliary wingers – Tite has been looking more at the model of Manchester City – full backs who can come inside, maintain the shape of the team and construct from deep. It is a less physically draining role than that of flying up and down the flanks, and so, goes the theory, it is one that can be performed by a player as old as Daniel Alves – even if he will be further weighed down by the captain’s armband.