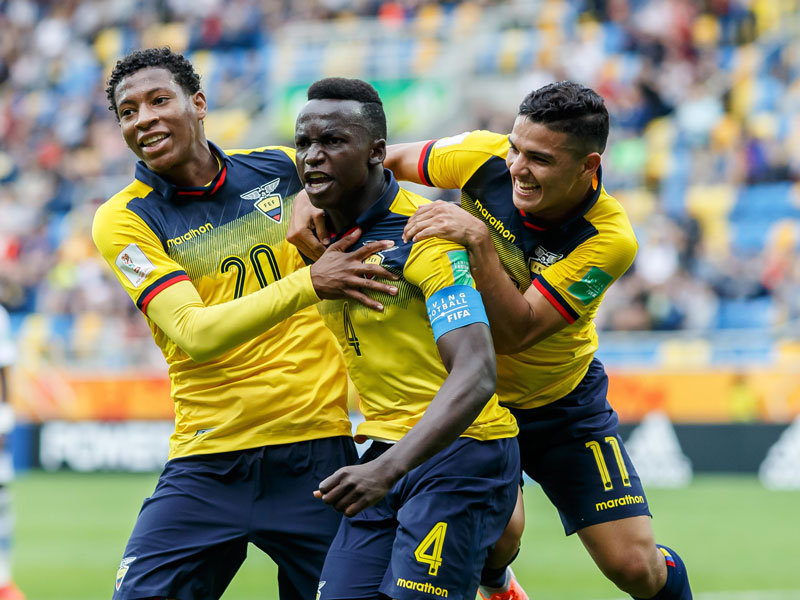 Two years ago, Venezuela were South America’s best side at the Under-20 World Cup, going all the way to the final, where they missed a penalty on the way to a 1-0 defeat to England.

In the current championship, Ecuador have been the best South American team, confirming the impression they made at the start of the year when they were crowned continental champions. They go into Tuesday’s semi final against South Korea with high hopes.  After a slow start in Poland they have hit form.  Saturday’s 2-1 win over the USA in the quarter final was their third consecutive victory, all achieved inside 90 minutes.  South Korea, meanwhile, were taken to extra time and a penalty shoot out before they finally got past Senegal. The South Americans, then, should be the fresher side. But whatever happens in the last week of the tournament, Ecuador would seem to have unearthed a highly promising generation – as Venezuela did in 2017.  Five of their Under-20 heroes from two years ago have been named in the senior squad for the Copa America, and Venezuela are convinced that this group of players will be good enough to take them to the senior World Cup for the first time. Magnificently flexible goalkeeper Wuilker Farinez and dynamic central midfielder Yangel Herrera will be part of the national side for years to come – both were on fine form in Saturday’s 3-0 win over the USA.

It is highly significant that Venezuela and Ecuador have done so well. Twenty five years ago the idea that these would be South America’s best sides, at any level, was unthinkable. They were the only two countries in the continent never to have gone to a World Cup- an objective which for Venezuela looked as far away as the moon, while Ecuador had only ever won five World Cup qualifiers in all of their history. But in this century Ecuador have made it to three World Cups, while Venezuela have earned the right to dream.

So much of this can be attributed to the introduction in 1996 of the marathon format of World Cup qualifiers, where all ten South American nations play each other home and away. Previously they were divided into groups. There were far fewer games, and there could be gaps of years between competitive matches. The current format changed everything. It gave the lesser South American nations the kind of calendar that European national teams take for granted; regular competitive matches, with guaranteed income, and therefore the chance to keep a side together and afford better coaches.

It has also enabled them to invest in a youth development structure. Between 1995 and 2007, Argentina enjoyed huge success at Under-20 level – not only in terms of the titles they won but, more importantly, in forming a production line of players for the senior side. For more than a decade now, Uruguay have done this extremely well, constantly renewing their senior side with the latest crop of Under-20 graduates. The others have clearly been watching and learning.

Venezuela gave the Under-20 age group such importance that they have been coached by Rafael Dudamel, the former goalkeeper whose main task is to take charge of the senior side. Ecuador’s Under-20s are coached by Jorge Celico, an experienced and much respected Argentine. In the short term, his task is to try and win the Under-20 world title. But in the long run, the success of his work will be judged by how many of his current side go on to become important players in the senior ranks. On the evidence so far, keeper Wellington Ramirez, left back Diego Palacios, central midfielder Jose Cifuentes, playmaker Jordan Rezabala and attacking midfielder Gonzalo Plata, among others, are progressing very nicely.