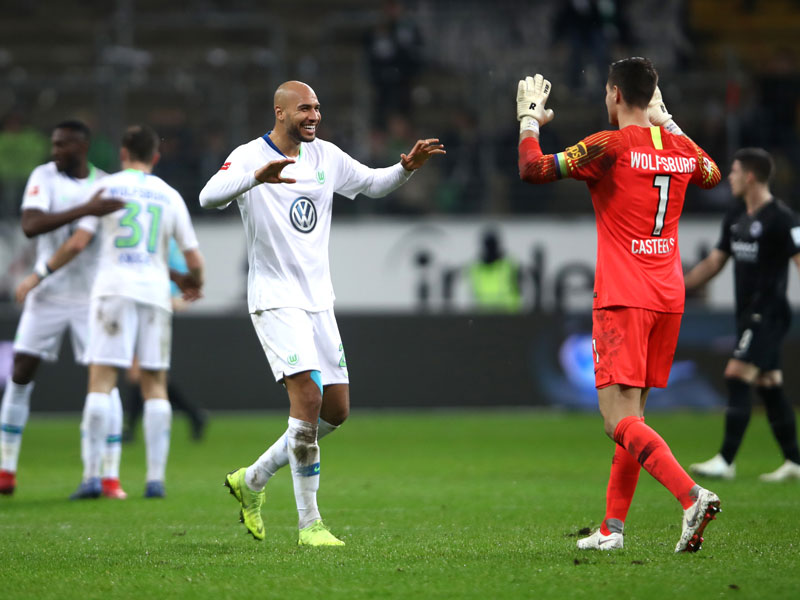 All good things eventually have to come to an end. After going undefeated in 11 competitive matches – a marvellous sequence featuring ten domestic and European wins – Eintracht Frankfurt finally have let their guard down, losing 2-1 at home to Wolfsburg in the Bundesliga.
Former Eintracht and Germany midfielder Rudi Bommer recently described his old club as “the most spectacular side in the country” and the thesis has much to commend it . During their two-month unbeaten run, the Eagles amassed no fewer than 36 goals and proved equally prolific when winning all five of their Europa League group fixtures (against Marseille, Lazio, and Apollon Limassol), on the score-sheet 15 times.
Little wonder Eintracht fans are so euphoric at the moment. Results could not be better, their team is exceeding all expectations in Europe and the Champions League qualifying spot looks a distinct possibility.
The architect of Frankfurt’s all-out autumnal assault is new head coach Adi Hutter, who last season steered Young Boys to their first Swiss title in 32 years. Unlike his Frankfurt predecessor Niko Kovac – now fighting to hang on to his job at crisis-hit Bayern Munich – Hutter is devoted to risk-taking, proactive football. On many levels, he is the Austrian Jurgen Klopp. A devotee of an aggressive pressing game, lightning-fast transitions and electrifying forward thrusts.
It’s by no means an economic style of play. There certainly is no room for player passengers here. “In this team you have to run until you can run no more,” says French striker Sebastian Haller. Hutter might not be a big personality, preferring his side to do his talking for him. But that does not mean, he is not ruthless. Once his team gets on top, he insists on it staying that way. At the Waldstadion, they do not let up.
“If we’re winning 2-0, Adi Hutter wants a third,” says Eintracht defender Danny da Costa. “When we’re three-up, he pushes for a fourth. And so on.”
From now until the end of the season, Hutter and the Eintracht Nation will be praying for the continued good health of their trio of talismanic attackers: Haller, Serb front-man Luka Jovic and Croat winger or number ten Ante Rebic. The threesome compliment each other so well. Jovic as the archetypal penalty box predator; Haller a compelling melange of battering ram, aerial threat, marksman and assist-provider and the bullish and technical qualities of the mobile Rebic.
With such a sharp cutting edge at their disposal, Eintracht have every right to dream of their first Champions Cup/Champions League odyssey in almost six decades.
[collection name=”small” accordion=”mobile” excerpt=8]
What We Learned This Week
1. Robben’s farewell tour
Now in his tenth season at Bayern, Dutch winger extraordinaire Arjen Robben has revealed he will leave the Bavarian outfit at the end of the current campaign. The 34-year-old, famous for netting the winner in the 2013 Champions League final against Dortmund, could end up at Groningen, his first pro team. “It would be the ultimate fantasy come true if he completed his career with us,” declared Groningen general manger Hans Nijland.
2. Big Apple to Saxony
Ever keen to snap up young talent, RB Leipzig have announced the signing of New York Red Bulls and USA defensive midfielder Tyler Adams. The 19-year-old, who will officially join his new club in the January transfer window, has agreed a four-and-a-half season deal with the Roten Bullen. “We’re convinced that Tyler can straight away make us stronger in central midfield,” said RB coach/director of sport Ralf Rangnick.
Don’t forget to follow World Soccer on Facebook and Twitter.