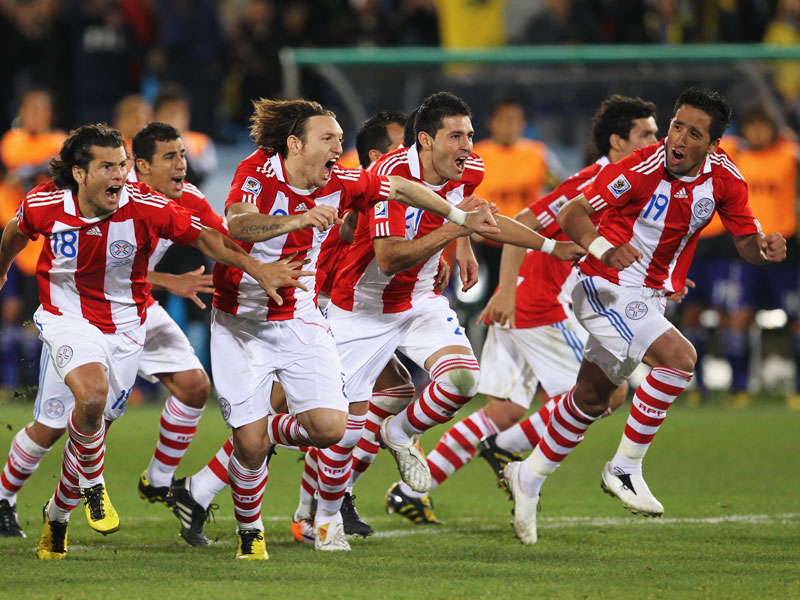 More than 8 years ago, Paraguay achieved their best ever World Cup result when they reached the quarter finals.

It could have been even better. They gave eventual champions Spain one of the hardest knock out games they faced in that run of 3 consecutive tournament wins – and had Oscar Cardozo scored from a penalty, then maybe the Spaniards would still be searching for their first World Cup win.

At the time, Cardozo was in the middle of a highly successful spell in Portugal with Benfica. He and his colleagues in the World Cup squad were scattered across the globe.  Of the group of 23, just 4 were based in Paraguay.

All these years later, a handful of those players have retired. Edgar Barreto is still in Italy, Lucas Barrios has gone back to Chile and Nestor Ortigoza remains in Argentina.  The other 15 – including Oscar Cardozo – are all playing in Paraguay.

The youngest of them, winger Rodolfo Gamarra, turns 30 next month. Many of the others are closer to 40. The peak years of their careers were played abroad. Domestic Paraguayan football is for veterans – or for youngsters.

On Sunday, Olimpia met Cerro Porteno in the country’s big derby match.  A couple of the class of 2010 were in action – striker Roque Santa Cruz for Olimpia, defensive midfielder Victor Caceres for Cerro. And the opening goal of the game was scored by someone who was just 6 years old when the national team were shining in South Africa.

Born in 2004, Fernando Ovelar was just 14 years, 9 months and 29 days old, when, slipped behind the Olimpia defence, he put Cerro Porteno into the lead with a cute finish past the keeper. It is an astonishing age to make an impact on Paraguay’s most high pressure match – and perhaps a worrying one.

The case of Santa Cruz stands as a warning. The beanpole striker has had a fine career. But it could have been much better. When Bayern Munich signed him in 1999, it was with the ambition that he was destined to become one of the best players in the world. A first team player with Olimpia at the age of 15, he came to wider attention just past his 17th birthday when he scored three goals against Jose Luis Chilavert – and he was still only 17 when he led the Paraguay attack on home ground in the 1999 Copa America, the first time the country had ever staged the competition.

His subsequent career, though, has been dogged by injuries. His body has frequently buckled under the strain, and it may be the case that his lean frame was pushed too hard too soon.

A more recent cautionary tale for Fernando Ovelar is supplied by another teenage Cerro Porteno starlet.

Sergio Diaz, a stocky little striker in the Aguero mould, made his Cerro debut at the age of 16, and scored against Olimpia a month past his 17th birthday. Until Sunday he was the youngest name on the scoresheet in the derby’s history. He was a consolidated domestic star when he made the move to Real Madrid in the summer of 2016.

Since then, though, he has stalled. Perhaps the step up has proved too steep. Maybe the process of adaption has been harder than expected. And it could be that he, too, was over-played in his formative years. At age of 20, he is now on loan in Brazil with Corinthians, where his start has been hampered by knee problems.

Fernando Ovelar has every right to celebrate the day that he scored in Paraguay’s biggest match. It is to be hoped that there will be many similar days in the future. And they are to be valued all the more in the certain knowledge that the path ahead will not always be smooth.