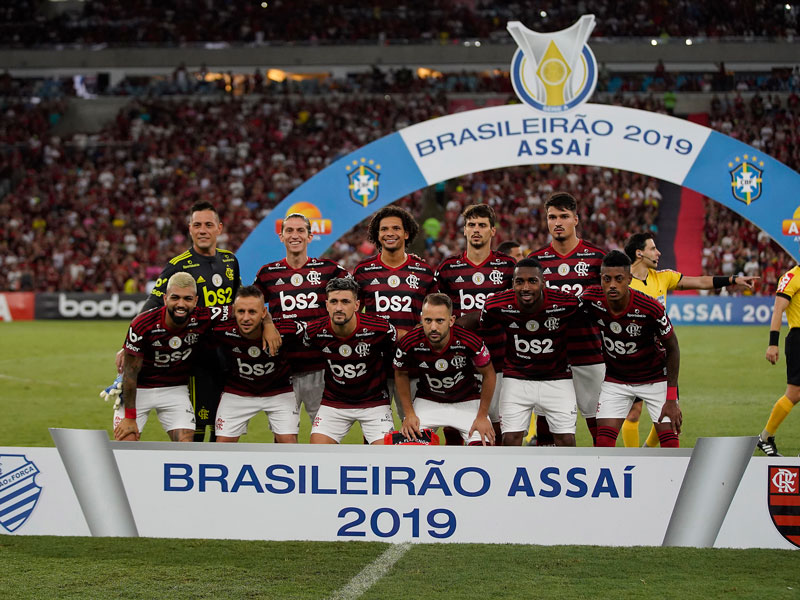 There could be soon good news coming for this year’s version of the Club World Cup.

The current format, started in 2005, has failed to inspire for a reason that it is easy to identity – the chasm between the champions of Europe and the rest of the world. True, there have been three South American wins, all for Brazilian sides. But Sao Paulo in 2005, Internacional in 2006 and Corinthians in 2012 all took the field well aware of their inferiority, fought from a trench and broke out to score a single goal – not something to grab the imagination of the neutral.

This year, though, there is the prospect of a South American team which might be willing and able to meet the Europeans on more equal terms. Rio giants Flamengo have caught the imagination of the continent since Portuguese coach Jorge Jesus took over in the middle of the year – and confirmed the good impression that have been making on Wednesday, when they booked their place in the final of the Libertadores with a stunning 5-0 win over compatriots Gremio, the 2017 champions who were playing their third consecutive semi final.

First, of course, Flamengo have to win the final to make it through to the Club World Cup. And this is no foregone conclusion. The opponents are the reigning champions, River Plate of Argentina, full of attacking options and with a fine young coach in Marcelo Gallardo. But Flamengo will be widely seen as the favourites – and with a ten point lead at the top of the Brazilian league table, they promise to be the most interesting side to come out of South America for some time.

And one of the striking things about them is the influence of Europe on their football. It is there is some of the players; keeper Diego Alves and full backs Rafinha and Filipe Luis are veterans who have come back home after long spells on the other side of the Atlantic.

Another three have a different back story. The strike duo of Gabriel Barbosa and Bruno Henrique are in magnificent form. Both have recently won international call ups. And midfielder Gerson would have been included in the current Brazil squad had coach Tite decided against including any home based players. All three went to Europe and have returned, on loan in Gabriel’s case, after falling well short of expectations.

This is curious indeed. True, Gabriel is far from the only player who has struggled at Inter Milan – though he also flopped with Benfica. Bruno Henrique was a dismal failure with Wolfsburg, and Gerson could never get going with Roma.

Recent evidence suggests that talent was not the problem. It is possible that the trio found it hard to adapt, not only in cultural terms, but to the reality of being one of a squad, having to fight for space, when they had previously been thought of as something special.

The Flamengo starting line up, then, contains six Brazilians with European experience – and there is also the case of club captain Diego, on his way back after serious injury, who played all across the continent.

And there is one more who might be the most vital piece of the jigsaw – Spanish centre back Pablo Mari.

Because the crucial ingredient that Jorge Jesus has brought across the Atlantic is the high defensive line. Flamengo stay compact, squeezing the opposition in their half of the field. It is the high line that allows the team’s front four to be so fluid, exchanging positions and confusing the opposing defence. If the defence stayed deep, then a gaping hole would appear, in which the opponent could freely construct its counter attacks.

The vast majority of South American sides are unable to play this way – because they lack the necessary resources. Many of the local centre backs drop deep to cover their lack of pace, and look to shine in both penalty areas – heading the ball away at one end, causing a threat from set pieces at the other.

In Pablo Mari, Flamengo have brought in a centre back who is tall and good in the air – he headed one of the goals against Gremio. He is also left footed and proficient at passing the ball out of defence. But most importantly, he is well versed in playing and organising a high line. His introduction to the side at the end of July has made all the difference.

It could have gone wrong. Thrown in at the deep end, he could have made some early mistakes and been jeered by the crowd. Instead he looked instantly at home. Until missing Sunday’s league game against CSA through suspension, he had played 21 straight matches. He was on the books on Manchester City, and had been loaned to Girona, Breda in Holland and Deportivo La Coruna when Flamengo came knocking. And now Flamengo’s European centre back provides the platform for the idea of the team’s European coach – and that high line is allowing the team to get full value from its South American forward line.