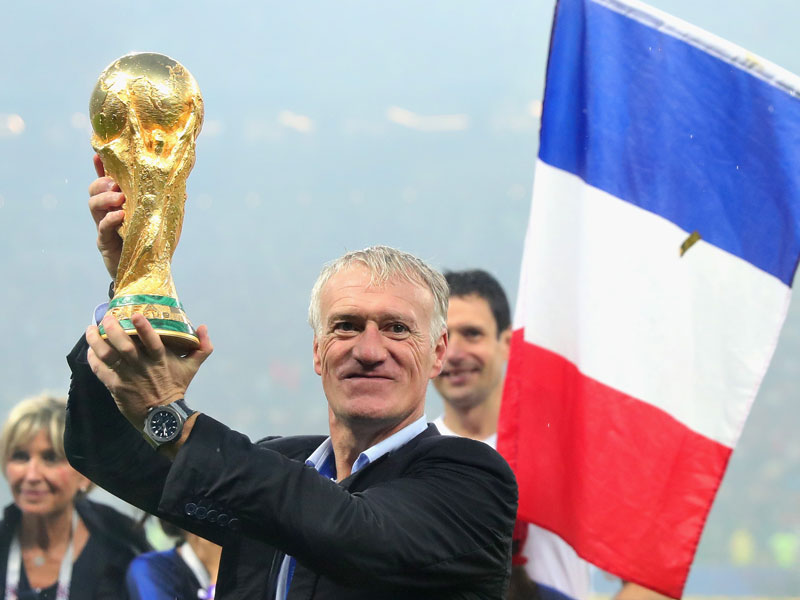 France coach Didier Deschamps was the calmest man in the French camp as they made their way to the World Cup Final in Moscow last summer.

“I was calm and zen during the competition,” he told Le Parisien. “You want to know why? Because I’ve won this cup [as a player].”

“I always slept at ease. Much better than in 2014. I didn’t end up tired. I managed to sleep, even in the worst of situations. I didn’t even have to take any medication to sleep. I managed without biting my nails, even though I’ve been doing it for 45 years. I should have been stressed but I wasn’t.”

Deschamps became only the third person – after Brazil’s Mario Zagallo and Franz Beckenbauer of Germany – to have won the World Cup as both a player and a coach.

Deschamps, of course, was the French captain in 1998 and two years later when they won the European Championship. He was also famously dismissed by Eric Cantona as a “water carrier” but then went on to enjoy a spectacularly successful career – unlike Cantona, who Michel Platini said was “big in small games and a small player in big games” and who has enjoyed more success in cinemas than he did with France.

As well as calmness, Deschamps brought modesty of the role of national coach. “When you’re a player, you’re an actor on the pitch and you’re implicated,” he says. “My staff’s accomplishment is thanks to my players, which is why you can never take that away from them. It belongs to them. When it doesn’t work, the coach is responsible 95 per cent of the time, but when things work it’s the opposite. But it doesn’t bother me at all.

“I’m just as happy for them as I am for myself, if not more! I was totally immersed. I didn’t want to be distracted.

“I was with my group, my staff, who are important to my work. My staff was incredible. There was a true feeling of solidarity with my 20 staff members.”

The chaotic scenes in the press conference after the Final in Moscow, when players invaded the stage and drenched their coach with water, show the affection with which he is held by his players. France were among the favourites going into the tournament but Deschamps knew all about the dangers of holding such a status, having been humiliated as world champions in 2002 in South Korea.

Two years later, on home soil in the European Championship, his side came up short again, this time against Portugal.

“France will be on the roof of the world for four years,” he says. “It’s a great accolade. The memories and emotions remain, but the titles more so because we’re competitive athletes.

“In 2016 we let an incredible opportunity get away, even though we realise that it was a learning experience in hindsight. We were able to approach this World Cup differently.”

“At the Euros we had quite a few players over 30 and I took the option in this World Cup to take 14 players who had never played in a big international tournament,” explains the coach.
The players who featured at Euro 2016 – Lloris, Paul Pogba, Raphael Varane, Antoine Griezmann and Olivier Giroud – became key figures in Russia. None more so than Pogba, of whom Deschamps says: “For the younger players, he’s an example.

“He played in the 2014 World Cup in Brazil and Euro 2016 in France. He’s part of a transitional generation. We often say and repeat that the team lacks leaders and personality – but no, they showed that during the tournament!”

The youngsters selected by Deschamps, included the previously unheralded defenders Benjamin Pavard and Lucas Hernandez, were among the biggest stars of the tournament.

“We didn’t always control games,” Deschamps acknowledged. “But from the start I made the choice of young players. Among the 14 who played their first major competition it goes without saying that they’ll be better in two or four years.

“We played an excellent Belgian team [in the semi-final] who caused us a lot of difficulty. Too bad for them. This World Cup was special; I noticed it right from the get-go. It didn’t always favour the teams who had the most possession. To quote Guy Stephan [his assistant], I would say our team was precise like a surgeon. It’s the truth. We managed to hurt them.”

“We’ll find out in two years,” he admits. “You need to be careful because, in sports, when you win big you can also screw up big. Someone said this to me a while ago. The day after is always difficult. I’ve experienced it first-hand. It took me six months to find my feet after 1998.

“I’m still here for two years, that’s already quite good. We won’t have this World Cup taken away from us but there will be another one in four years. My contract ends in 2020 and that’s good
as is. I’m not worried about my situation. I wasn’t worried before the World Cup either.”