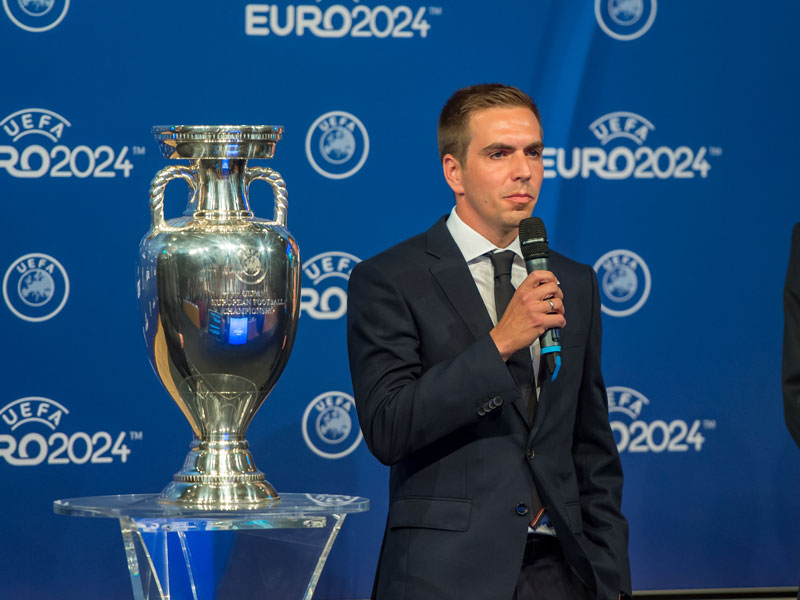 ‘Treffpunkt 2024’ (Rendezvous 2024). As was widely-predicted, Germany have won the right to stage the next-but-one European Championships, comfortably seeing off the challenge of Turkey in a poll of UEFA’s executive committee.
Due to stage their fourth international main event – after the World Cups of 1974 and 2006 and the 1988 European Championships – the German success at the ballot box was the equivalent of a home and away victories in a two-legged tie: 12 votes, four against, one abstention and one absentee because of illness.
“I’m very proud; we’ve big plans and are looking forward to putting on an exceptional festival of football for everyone in Europe to take part in,” said former Nationalmannschaft skipper turned German bid ambassador Philipp Lahm. “There was an unbelievable amount of tension. You’re never quite sure what might happen.”
Lahm, now 34, stands on the verge of a sparkling career in football administration. He is due to chair the Euro 2024 organising body and barring any major mishap, must have every chance of one day becoming president  of the DFB, the German federation.
In truth, Germany always were the overwhelming favourites in this particular head-to-head. Their stadia, hotels, transport infrastructure and financial stability earned top marks across the board, while the Turkish dossier had more than the odd glaring hole in it.
The questionable human rights record of the current regime of Turkish president Recep Tayyip Erdogan – notably judicial partiality, free press restrictions and repression of minorities – was not exactly a unique selling point and economically, the country is teetering. The Turkish currency, the Lira, has lost 50 per cent of its value in the last few months, the stock market is plunging and inflation on the rise.
UEFA, fresh from making a cool 800 million euros from Euro 2016, ultimately looked at the Turkish candidacy as a financial risk they dare not take. Why kill off the goose that laid the golden egg ?
For the 2024 main event, Germany will use ten venues. Nine of them (Berlin, Munich, Dortmund, Gelsenkirchen, Stuttgart, Hamburg, Koln, Leipzig and Frankfurt) hosted fixtures at World Cup 2006. The only new site on the map compared to 12 years ago is Dusseldorf’s swanky Merkur Spiel Arena on the banks of the Rhine.
[collection name=”small” accordion=”mobile” excerpt=8]
What We Learned This Week
1.  Bayern are human
Two poor results in the space of a four days – a 1-1 draw at the Allianz-Arena to Bavarian little brother Augsburg and 2-0 reverse at early season surprise packet Hertha Berlin – has left new Bayern Munich coach Niko Kovac with his first mini-crisis to clean up. This certainly wasn’t the all-conquering Bayern we are used to and with a resurgent Dortmund overtaking them at the top of the table, Kovac will have to find answers fast. Of particular concern is the champions’ lack of punch up front. In the Hertha defeat, the Bavarians had no fewer than 25 shots at goal. All to no avail.
2. Schalke relief
After starting the season with five straight defeats in the Bundesliga, Schalke finally have some points on the board thanks to a hard-fought 1-0 home win over Mainz. ” Mentally, it’s very important for us to have recorded our first win, ” said Schalke director of sport Christian Heidel. ” We should be a little more relaxed from here on in. However, we can take nothing for granted. Just because we’ve won this one, does not automatically mean we’ll do the same next week. “
Don’t forget to follow World Soccer on Facebook and Twitter.