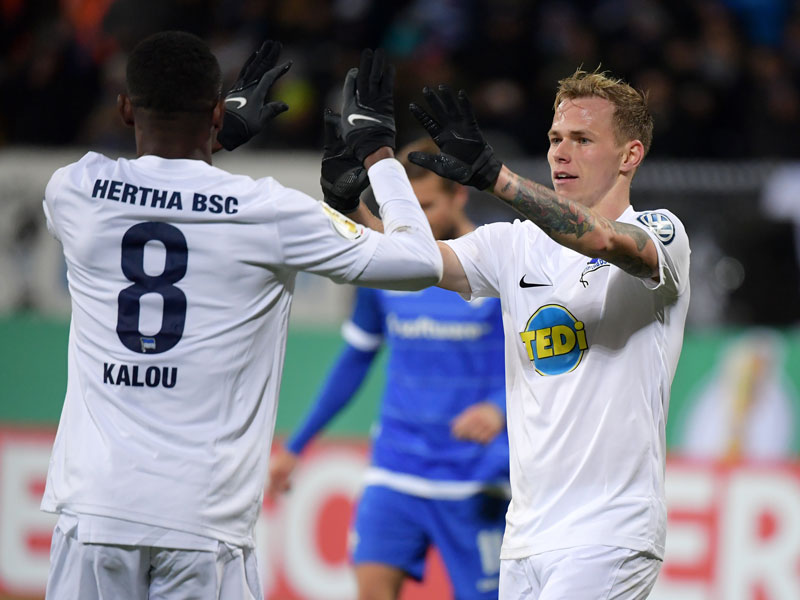 Nick Bidwell’s notes from Germany: Hertha Berlin Continue To Surprise In The Bundesliga

If there was a trophy for keeping their light under a bushel, for deliberately underselling themselves, surprise Bundesliga high-flyers Hertha Berlin would have a lot of polishing to do.
During the off season, grand designs were in short-supply in the ‘Alte Dame’ (Old Lady) camp. Publicly, club officials appeared more interested in a possible German Cup run than qualifying for Europe through a strong Bundesliga showing and when each member of the squad was asked how they saw 2018-19 panning out, only one – veteran Ivory Coast forward Salamo Kalou – showed any ambition at all, suggesting they should aim for their first Champions League spot in two decades.
Even the moles who caused so much damage to the Olympiastadion turf last summer, seemed to be sending out their own pessimistic message – prepare for a season of uneven bounces.
Fortunately for Hertha fans, the soft pedaling has turned out to be a hoax. Beneath the facade of modesty, Hertha are a gutsy and competitive side, losing just once in their opening nine Bundesliga games, claiming the major scalp of Bayern in late September and more than holding their own in a recent 2-2 away draw at league leaders Dortmund.
All credit to Hertha for their purposeful, bold and strong-willed display against the in-form Dortmunder. Twice behind and frequently overrun, yet never panicking and grittily refusing to fold. A Kalou brace would earn them a vital point, the second an injury-time penalty.
Pal Dardai, Hertha’s head coach since February 2015, certainly has the capital city outfit moving in the right direction. In his first three seasons in charge – steering them to seventh, sixth and tenth-place finishes – unembellished stability was the order of the day: scrupulous defensive organisation, total commitment and high energy levels. But this term, a far more attractive Hertha has evolved, one with greater quantities of attacking verve and imagination thrown into the mix. “We’ve made strides in our ball-playing style and are creating more chances,” says club managing director Michael Preetz. “That’s what we wanted.”
A lot of Hertha’s marked improvement is down to their faith in early-years talent. They have a pair of fine young centre-backs in Niklas Stark and the Dutchman Karim Rekik; defensive midfielder Arne Maier has come on by leaps and bounds; while Slovak schemer Ondrej Duda has regularly been on the score-sheet this season. Equally impressive has been livewire Dutch Under 21 left-winger Javairo Dilrosun, snapped up for a nominal fee from Manchester City reserves. The kid is electric, excellent in one-on-ones and gloriously unpredictable.
“We have a really small wallet and so have to work more on a structural basis,” declares Pal Dardai. “We have a lot of young players and have to be patient with them. We must not make them anxious by placing overly high expectations on them.”
Typical Dardai, typical Hertha. Keeping a lid on the hype.
[collection name=”small” accordion=”mobile” excerpt=8]
What We Learned This Week
1. Brooding Bruma.
In outstanding form for Portugal this autumn, tricky RB Leipzig winger Bruma is becoming increasingly unhappy at the Saxon club. He only has started one Bundesliga game this season and has hinted that he will push for a move in January if he remains on the fringes. The coaching staff at RB apparently would like Bruma to work harder off the ball and show a greater willingness to learn the German language.
2. The Hamburg axeman cometh.
Hamburg, still coming to terms with their first-ever campaign of non-Bundesliga football, have sacked coach Christian Titz. HSV are hardly flatlining in the second division, currently in fifth position, only two points behind leaders Koln. But knee-jerk reactions are very much a speciality in these parts and a run of just one win in five was enough for the board to pull the plug, replacing Titz with ex-Stuttgart boss Hannes Wolf.
Don’t forget to follow World Soccer on Facebook and Twitter.