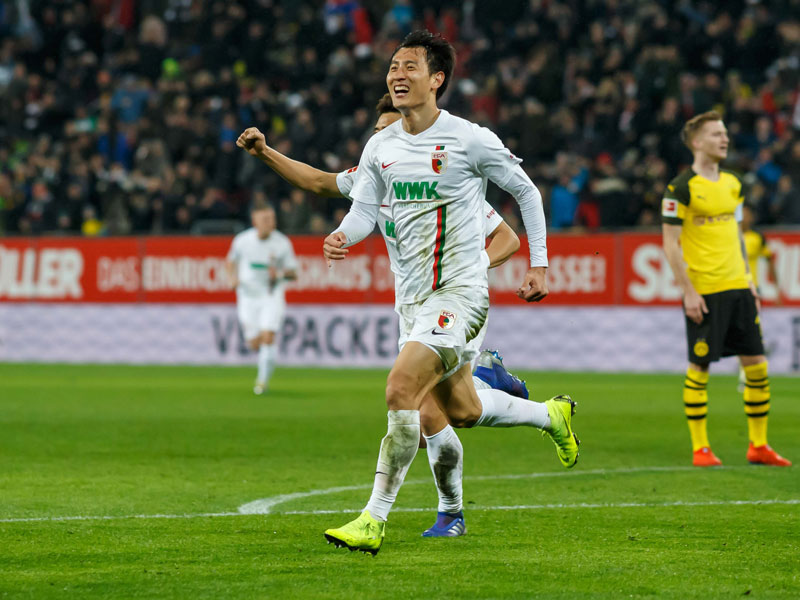 One, two, Ji. The two-goal hero of the hour as Augsburg eased their relegations fears with a shock 2-1 home victory over league leaders Dortmund, South Korean attacker Ji Dong-won very much deserves his share of good fortune

The 27-year-old striker or winger, now in his third spell with FCA, had been on a bread and water diet for most of this term, often confined to the bench and sidelined for three months after damaging knee ligaments while celebrating a goal against Mainz in September.

But all of a sudden the forgotten man is scorching hot again, not only delivering the all-important brace to see off Dortmund, but also on the score-sheet a couple of weeks earlier in a 3-2 defeat to Bayern Munich. Clearly the bigger stakes, the bettter he likes it. Just 12 months ago, FCA were happy to send him on loan to second division Darmstadt. Now Augsburg hope to offer him a new contract.

With only a few months left on his current deal, that has to be the priority for the Augsburg top brass. In a line-leading role against Dortmund, he was quite sensational, forever exposing opposition defenders with his intelligent positioning, adhesive touch on the ball and non-stop exuberance.

No one in the Dortmund rearguard seemed to know how to handle him and his second goal in particular was a masterclass, latching on to a misplaced pass from ‘Schwarz-Gelben’ full-back Achraf Hakimi, sprinting clear and turning stopper Dan-Axel Zagadou inside and out before calmly clipping the ball home.

“His second goal was absolutely world-class,” enthused Augsburg general manager Stefan Reuter. “It was a stroke of genius. The highest quality. Brilliant. This was a remarkable performance. He fought for every ball, worked so hard and was rewarded with both our goals..”

His substantial role in the downfall of Dortmund – only the Black-and-Yellows’ second defeat of the campaign – would have been especially satisfying for the Korean. He spent an unhappy six months on the Dortmund roster in 2014-15, handicapped by a knee problem and never rising above the station of bit-part reserve teamer. He simply could not wait to return to Augsburg.

Once on the books of Premier League Sundertland, Ji attributes his form explosion to a simple shot of confidence. “Right now, I feel there’s much faith in me. That helps so much. I recently saw my good friend (and fellow countryman) Heung-Min Son score for Tottenham against Dortmund in the Champions League. I thought I could do that too.”

Despite Schalke’s lowly league position (14th) and terrible results of late – the 4-0 home loss to newly-promoted Fortuna Dusseldorf was the Royal Blues’ sixth Bundesliga match without a win – the board are reported to be standing by coach Domenico Tedesco. Well, at least for now. The Gelsenkirchener are seven points above the relegation zone and if any more humiliations ensue, the panic button may well be pressed. They don’t do patience or indulgence here.

Franz Beckenbauer, the iconic ex-Bayern Munich and Germany libero and coach, is backing his former club to prevail over Dortmund in what promises to a nerve-jangling title run-in. ” Dortmund had a fantastic Autumn Championship, ” Der Kaiser told Bild. ” However football is to a great extent played in the mind and they have got into a log-jam (just one Bundesliga victory in five). If they can find the solution to it, they will be strong again. The only question is when. I’ve had the feeling for a while that Bayern have turned the corner. ”