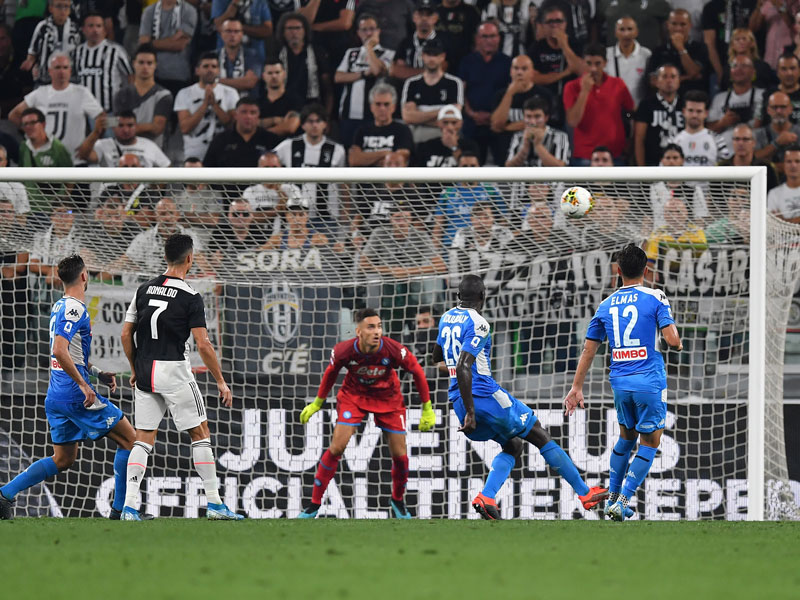 Paddy Agnew’s Notes From Italy: Juventus Find A Way To Win Against Napoli

Two days into the Italian season, the starting stalls have opened and the race is well and truly on. It was always possible that the fixture list computer had come up with a genuine firecracker when it scheduled two of the biggest games of the entire season, namely Juventus v Napoli and the Rome derby, for Day Two. So, it proved.

If the Italian season takes its lead from the intensity, drama and excitement of these two games, then we are in for a fantastic year of football. Napoli fans are likely to long recall their 3-4 defeat by the champions in Turin, with a bitter sense of regret.

This was the game which Carlo Ancelotti’s Napoli lost twice. Firstly, they were steamrollered in the first hour by a Juventus side which cruised imperiously to a 3-0 lead.    Secondly, having finally found their mojo in the last half hour, Napoli pulled off a miracle to equalise on 3-3 only for the most unfortunate of own goals from their great Senegalese defender, Kalidou Koulibably, to ruin it all in the third minute of injury time.

Not surprisingly, at the end of the night, Napoli coach Ancelotti was clearly ‘disappointed’ (a euphemism) with his side. What were we doing for the first hour of this game, he asked? Obviously, he had no complaints about Koulibably’s bad luck (the Senegalese defender completely miscued his clearance of a Miralem Pjanic free kick, slicing it into his own net) rather he seemed much concerned by the extent to which Napoli had gone missing for the best part of the first hour.

To be fair, Napoli were struggling to weather the initial storm of a rampant Juventus when they were hoist with their own petard. Having done well to win a 16th minute corner, Napoli then committed the sort of defensive error which would earn any Under 14 side in the Phoenix Park on a Sunday morning a thorough bollocking.

Put simply, Napoli piled into the Juventus penalty area leaving only one player, Greek defender Kostas Manolas, to hold the fort. When a Napoli shot on goal directly from the corner kick broke to Juve’s ex-Man City defender, Brazilian Danilo, suddenly Manolas found himself alone as both Douglas Costa and Danilo bore down on him.

Danilo, who had come on one minute earlier as a replacement for the injured Mattia De Scigilio, immediately knocked the ball to Douglas Costa on the left wing. The Brazilian made his way into the area turned inside Manolas and then stroked the ball into the path of his compatriot Danilo who had only Napoli goalkeeper, Alex Meret to beat. 1-0 and Danilo had scored on his club and league debut with just his second touch of the game.

Before Napoli had time to get their thoughts in order, the Old Lady struck  within just three minutes. Argentine Gonzalo Higuain showed us just why he was able to score a record 36 goals for Napoli (who else) just three seasons back when he pounced on the ball in the box, did a Zidane style “Veronica”, fooled Koulibaly and then struck home an imperious drive.

Napoli spent the next 40 minutes scratching their heads, trying to recover from that double shock. They might have thought that they had weathered the storm, doing well to get forward and win a corner after a fine long range shot from Brazilian Allan was turned around the corner by goalkeeper Wojciech Szcesny…but then…bang, they were 2-0 down in Turin.

As Napoli puzzled things out, Juventus blossomed, twice going close to scoring a third goal before halftime through German Sami Khedira. 17 minutes into the second half, that third goal arrived courtesy of CR7 Ronaldo to make it look like it was all over for the night.

Yet, perhaps because Juventus felt the job was as good as done or perhaps because, at this early stage of the season, they just tired in the hot Turin evening, they allowed Napoli back into the game. Manolas and useful Napoli right back Giovanni Di Lorenzo scored very similar looking goals from free-kick crosses whilst another new signing, Mexican Hirving Lozano, marked his debut with a well taken goal.

All three goals suggested that the current Juventus defence has serious problems. Which is hardly a surprise because club captain and long time central defensive pillar, Giorgio Chiellini was missing. Unfortunately for Juventus (and for Italy), Chiellini last Friday in training picked up a cruciate knee ligament injury that will keep him out of football for perhaps the next six months.

In his absence, new Dutch signing, Matthijs De Ligt, stepped up to the plate for his Serie A debut. However, perhaps because he is not yet fully fit (he appeared to suffer from cramp late in the game) De Ligt’s debut was far from perfect.

For Lozano’s goal, he appeared to be that nano second behind the Mexican whilst one is entitled to ask where was the tall Dutchman when the two similar free kick/crosses floated in for Napoli’s first and third goals respectively. However, De Ligt will have learned a lot from the night and what is more, Juventus still won.

Very quickly, some other observations.  The 1-1 draw in the Lazio v Roma derby might have exposed defensive shortcomings on both sides but this was an intense, sometimes spectacular clash, far removed from some of the dour, defensives derbies of yesteryear. Lazio, who hit the woodwork four times, will argue that they deserved to win. Roma, who hit the woodwork twice, will argue though that they were never out of the game.

If either of these two teams can tighten up their defences whilst maintaining this athletic intensity, then they could be in for a good Europa League campaign (Lazio are in a group with Glasgow Celtic, whilst Roma are drawn with Borussia Monchengladbach.)

Elsewhere, Torino bounced back from the disappointment of their elimination from the Europa League to defeat Champions League contestants, Atalanta, 3-2, in a game which suggests that Atalanta (drawn in a group with Premier League champions Man City) could struggle in the group stages of the CL.

Final thought – Inter, 4-0 winners on Day 1, continued their winning ways with a 2-1 away victory over Cagliari. These are the earliest of early days but already you get the suspicion that this season’s title contest may be a much tighter affair than some recent seasons, with the Old Lady essentially having at least two serious rivals – Inter and Napoli.