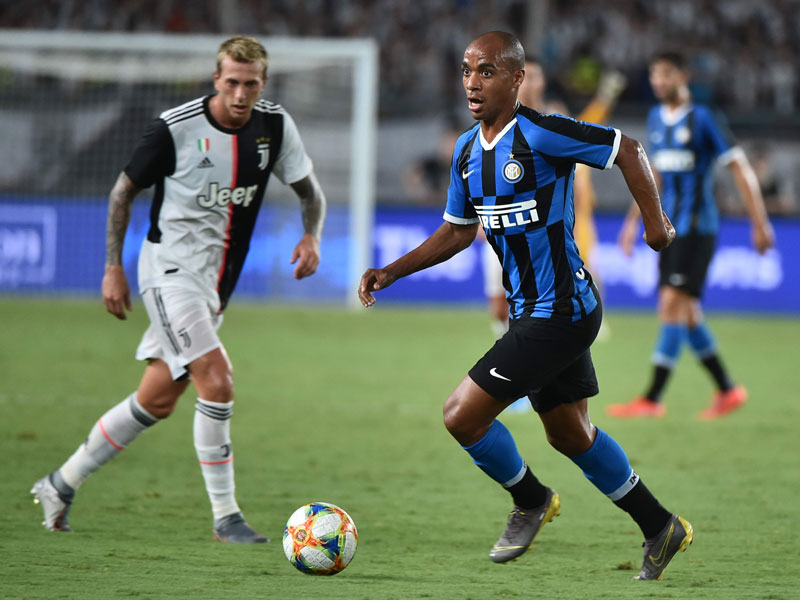 To say the least, this could be a hot and heavy week for the current top two in Italian football, league leaders Inter Milan and reigning champions Juventus. The pair are set to clash in a mouthwatering head to head next Sunday night in Milan but, in the meantime, both have delicate Champions League ties in midweek, respectively against Barcelona on Wednesday and Bayer Leverkusen on Tuesday.

Next Sunday night’s top of the table clash will obviously not prove decisive to the overall outcome of the Serie A title but it could still provide some vital markers. Sunday’s forthcoming game will be only the seventh of the season but it may indicate if Juve’s eight year, title stranglehold is under threat.

For a start, the Old Lady goes into this “Derby d’Italia” two points behind Inter so an Inter win would put a five point gap between the top two. Secondly, in winning all six opening games, Inter have made their best seasonal start since the ’60s days of coach Helenio Herrera.

However, it is arguable that Inter have yet to beat a seriously strong team. Their six wins so far have come against Lecce, Cagliari, Udinese, Milan, Lazio and Sampdoria in that order. Of these, only Lazio (beaten 1-0 by Inter last midweek) could currently be considered “serious” opposition.

Inter fans made much of their dominant 2-0 derby win over Milan eight days ago but that result looks less significant than usual given that in the meantime, Milan have lost to Torino in midweek, followed up by a dramatic 3-1 home defeat by Fiorentina on Sunday night. You have to go back to the 1938-1939 season to find the last time that AC Milan lost four of their opening six games.

If things went badly for Milan against Inter, they went even more dramatically wrong for them against Fiorentina last Sunday night. 0-2 down after 21 minutes, the Milan goose was thoroughly cooked before the 55th minute sending off of Argentine defender Matteo Mousacchio (for a dangerous tackle) compounded their night of misery. In the end, Fiorentina’s French golden oldie Frank Ribery finished them off with a wonderfully stylish 78th minute goal for a totally deserved win that would have been even heavier if striker Federico Chiesa had not had a second half penalty saved by Gigio Donnarumma.

Last week, we suggested that, if there were any light at the end of the Milan tunnel, it was being shone by their 20-year-old Portuguese winger Rafael Leao, a midsummer signing. He scored a wonderfully clever late goal that, however, did nothing to relieve the air of gloom and doom at the San Siro as the Milan fans either jeered their own team, applauded Ribery’s finesse or left the ground early.

Ironically, Milan, fifth from bottom on six points, are now away to Genoa next Saturday night in what has become an early season relegation battle against one of only three teams (Spal and Sampdoria are the other two) to have picked up even fewer points than them. As is the Italian way of things, the respective coaches, Aurelio Andreazzoli of Genoa and Marco Giampaolo of Milan, both go into this game knowing that another loss or even an unimpressive draw will almost certainly cost them their job. Meanwhile, the fact that their city cousins have made their best seasonal start in over 50 years hardly brightens the Milan mood.

With regard to Fiorentina, it is worth pointing out that they are the only side in Serie A to have taken points off Juventus this season, having held them to a closely contested 0-0 draw on the second day of the season.  With Chiesa and Ribery up front, with Marco Benassi, Gaetano Castrovilli, Chilean Erick Pulgar and Croat Milan Badelj in midfield and with Serb Nikola Milenkovic and experienced Uruguyan Martin Carceres in defence, this Fiorentina are beginning to look like a very handy unit. This is a team that will take points off many of their fancied rivals.

To go back, though, to the big game next Sunday night. It is obvious that Inter go into it on the crest of a winning wave, yet it is equally obvious that they have so far met nothing like Juventus.

In these times of big squads and the use of “turnover”, it will be intriging to see if either of the respective coaches, Antonio Conte at Inter or Maurizio Sarri at Juventus, will be tempted to rest key players for one or other of the two crunch games.

Our hunch is no. Both men are likely to stick with the same basic formation for both matches because they are both desperately important games. We have spoken about the Derby d’Italia but both teams also badly need to get points on the board in their Champions League ties, following disappointing draws in their opening group games.

Inter, outplayed in Prague by Slavia, picked up a 1-1 draw thanks only to an injury time equaliser. Juventus, in contrast, will probably feel that they had the better of their 2-2 draw away to Atletico Madrid. Only poor defensive work at two dead ball situations saw their 2-0 lead equalised by Atletico in the last 20 minutes.

It has never made sense to travel to the Camp Nou with a weakened side so one can expect Conte to field his strongest side on Wednesday evening. Uruguyan Diego Godin, Dutchman Stefan De Vrij and Slovak Milan Skriniar in defence, Ghanian Kwadwo Asamoah and dual playmakers Stefano Sensi and Croat Marcelo Brozovic in midfield as well as Belgian Romelu Lukaku all seem certain to start in both games.

Conte will probably make one change for the Barcelona game, resting Argentine striker Lautaro Martinez and replacing him with former Man United striker, Chilean Alexis Sanchez.   This, though, is an enforced change since Sanchez will be suspended for the Inter-Juve game, having been sent off during Saturday’s 3-1 away win against Sampdoria (in which he scored his first goal of the season).

Likewise, Sarri seems likely to call on a back four of Brazilian Alex Sandro, Leonardo Bonucci, Dutchman Matthijs De Ligt and Colombian Juan Cuadrado, with German Sami Khedira and Bosnia Miralem Pjanic in midfield and with in-form Argentine Paulo Dybala partnering CR7, Cristiano Ronaldo in attack. Here, too, the only possible changes may come in attack with Argentine Gonzalo Higuain on standby to slot in for his younger compatriot, Dybala.

As we said, this could be a hot and heavy week for these two clubs, one that could be important for both their Champions League and Serie A title prospects.