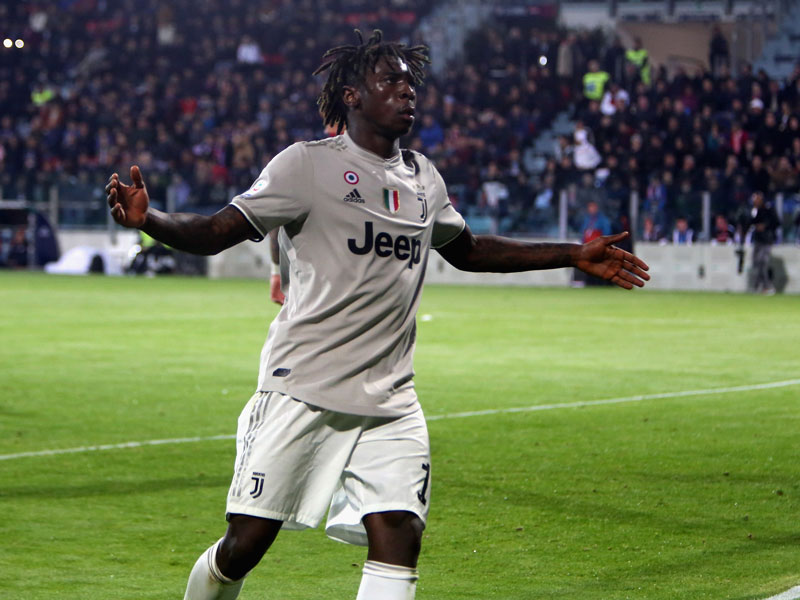 Paddy Agnew’s Notes From Italy: Kean Responded To Racism In The Perfect Way

Sometimes, even in the cynical, fiercely competitive world of professional football, there is a “poetic” justice out there. Or so it seemed last Saturday evening as 19 year old Moise Kean, the current overnight sensation in Italian football, scored the winning goal for Juventus in their 2-1 home defeat of AC Milan.

In just one month, Kean’s status has changed from that of a relatively unknown Juventus reserve to that of the “brightest promise” in Italian football. Kept on the bench until the beginning of last month, Kean (Italians pronounce it “Ken”) got his big break on the eve of Juve’s second round Champions League return tie with Atletico Madrid.

Juventus went into that “do or die” game 0-2 down from the first leg so, not surprisingly, coach Massimiliano Allegri opted to rest many of his normal first choice players for Juve’s Serie A fixture versus Udinese, three days earlier on March 8. In their absence, Kean made the most of his chance, scoring two goals in a 4-1 win.

When superstar team mate, Cristiano Ronaldo, then got injured playing for Portugal in a Euro 2020 qualifier against Serbia, there were further chances for him. In what has been an extraordinary month, Kean has not only scored five Serie A goals in five games but he has also scored two in two Euro 2020 qualifiers in only his second and third caps for Italy.

To put it mildly, Kean right now is “hot”, very hot. His comic-book “Roy Of The Rovers” type explosion, however, hit its first ugly moment last week when he was racially abused by Cagliari fans after scoring the winning goal in a 2-0 victory. Yes, the point is that Kean is a black footballer, born in Italy to a couple from the Ivory Coast.

Against Cagliari, Kean wrapped up the game with an 85th minute goal, scored right under the noses of the Cagliari “ultra” fans. Kean, who had already been subjected to monkey chants and other abuse from a minority of Cagliari fans, then stepped behind the goalmouth, “celebrating” his goal by standing in front of the fans with his arms stretched wide.

For some, Kean’s gesture was one of justifiable black pride. For the Cagliari fans at that end of the ground, it was a provocation and they responded with a vociferous outpouring of racial abuse. You might argue that any Juventus player who chooses to celebrate his goal in front of rival fans anywhere in Italy is destined for a hostile reception.

True enough but the thing is that Kean had already been so abused by Cagliari fans that Juve’s black French midfielder, Blaise Matuidi, had complained to match referee, Piero Giacomelli, to no avail. What was beginning to look like a routine episode of yet more ugly Italian fan racism then went nuclear when veteran Juve defender, Leonardo Bonucci, in words that he will long regret, suggested in a post-match interview that responsibility for the incident was to be shared “50-50” between the racist fans and the provocatory Kean.

On the pitch as the incident unfolded, Bonucci had pulled Kean away from the ultra end of the ground, apparently trying to move him out of harm’s way.  That had looked like the classic gesture of a team senator “modulating” the behaviour of an imprudent young team mate.

Perhaps, Bonucci’s comments were made in that spirit, that of offering some wise counsel. However, even if Bonucci immediately went out of his way to clarify his position and to express a total rejection of any racist position, his words had appeared to minimize the gravity of the racist abuse. In so doing, they prompted a tsunami of outraged protest, much of which came from outside Italy.

“Bonucci is saying something that many people think, namely that blacks deserve whatever happens to them…Bonucci doesn’t say that the fans are in the wrong, rather he says that Kean went looking for it. This is just like those people who, when a woman is raped, they go on about how she was dressed…”

“The problem is that no white man can even begin to imagine what it feels like when a stadium, or part of a stadium, makes monkey noises at you…

“Does Bonucci realise the weight of his words? He is saying that the black athlete is effectively 50% responsible for the racial abuse. That means that Kean should apologise. So, the colour of Kean’s skin is a provocation, is it? It’s just like what American activists used to say, namely ‘My skin is my sin’”.

Coach Mancini was one of many to call for tougher measures, saying:

“The way people behaved towards Kean is unacceptable. Racist chants have to be outlawed, we’ve had enough of them. We’ve got to take a position and impose hardhitting measures so that this type of thing stops…

“…even in England, where they are much ahead of us in the fight against racism, these things still happen…but, still, we have got to do a lot more to wipe them out (in Italy)…”

For the time being, it is not clear what disciplinary sanctions will be imposed on Cagliari in relation to the incident. When the Football Federation’s Chief Investigator, Gerardo Mastrandrea, sat down to consider the case last week, he immediately adjourned it so that he might gather up more evidence re the who, why and when of the incident in order to understand “the dimensions and the real impact of these phenomena…”.

Given the international echo prompted by the events at Cagliari, it is easy to understand just why Judge Mastrandrea (and indeed the Italian Football Federation) is treating this case with the utmost caution. Ironically, too, the only sanction so far handed down was given to Moise Kean no less.  He received a €2,000 euro fine for simulation in the penalty area, after being yellow carded for an alleged “dive”. The point here is that Federation rules give the Federation Judge the possibility of fining a club whose fans have behaved in a “discriminatory” manner.

That observation prompts two questions. Firstly, will the judge use those powers and, secondly, will it have any impact, even if he does?

In the meantime, as we said above, Kean gave the perfect response to all of this unwanted publicity by coming off the bench in the 66th minute last Saturday to score Juve’s 84th minute winner, with a typically intelligent goal in which he combined clever off the ball movement with lethal finishing. The thing about Kean is that he is very good.

As Juventus gird up their loins for their Champions League quarter final first leg against Ajax on Wednesday, there remains huge uncertainty about the fitness of Main Man Ronaldo. If the Portuguese ace has not recovered in time for this game, the Old Lady can at least console herself with the thought that, with Kean ready to step in as a replacement, all is not lost.