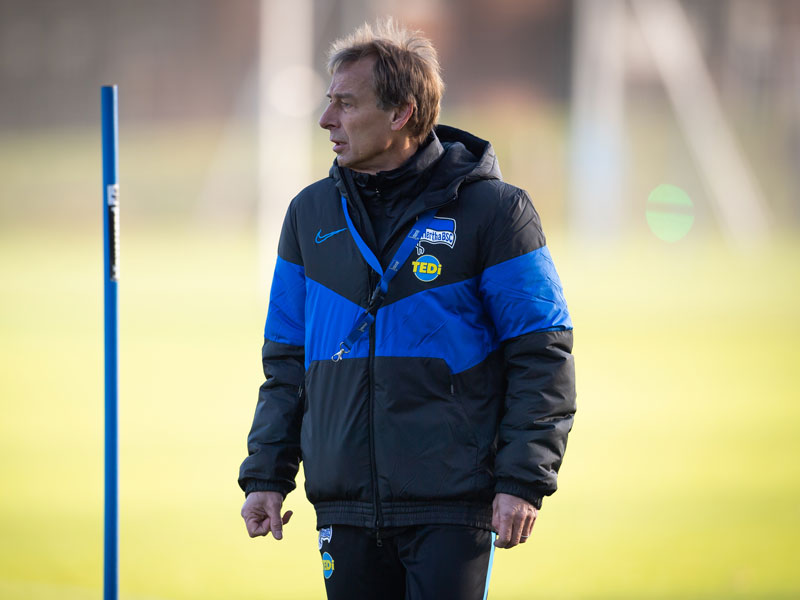 Klinsi is back. Over a decade after his last coaching job in Germany – a dismal ten-month spell in charge of Bayern Munich – ex-Nationalmannschaft boss Jurgen Klinsmann is once again treading the Bundesliga boards, this time as Hertha Berlin’s interim ‘Trainer’.

Klinsmann, brought in to replace the sacked Ante Covic, is only scheduled to be the captain of the Hertha ship until the end of season. But who knows what will happen if he turns out to be is a roaring success in the capital.

Yes, Hertha have been poor in the first three months of the season, winning just three Bundesliga games and flirting with relegation disaster. Yet on paper at least, their squad is a reasonably good one.

Klinsmann’s task is two-fold. Objective number one: to ward off the demotion demons. Number two: to set a course for Europa League qualification. Given the talent at the Olympiastadion, both goals could well be achievable.

The key for Klinsi will be to strike the right balance in terms of leadership lines of demarcation. Tactical matters are not especially Klinsmann’s forte. He excels on the broader theme front – nurturing younger players, motivating the group, communication in all its forms. The one-time Germany skipper and goal machine is a guy for the new direction, the over-arching project.

As far as the Hertha Xs and Os are concerned, Klinsmann will delegate the lion’s share of the responsibility to his assistant, the former Bremen and Ingolstadt coach Alexander Nouri. The type of chemistry the pair enjoy in the weeks and months ahead will be vital.

What the Klinsmann appointment shows above all is the determination of new Hertha investor Lars Windhorst to transform the club into a real big city outfit, one which can go toe-to-toe with the continental big boys. Windhorst, a financier, now owns 49.9 per cent of Hertha’s shareholding – which cost him some 224 million euros – and his ambition is palpable.

Windhorst initially wanted Klinsmann to be his personal advisor, recently giving him a seat on the club’s supervisory board. Just a few weeks later, with the waters far choppier, Klinsmann the icon has a wholly different brief to get his teeth into.

After overseeing four straight wins in the Bundesliga and Champions League, Bayern Munich caretaker boss Hansi Flick finally had that sinking feeling, powerless to stop Leverkusen conducting a 2-1 smash-and-grab raid at the Allianz-Arena. Crucially, though, Bayern chairman Karl-Heinz Rummenigge did not seem particularly perturbed. “This loss was totally unlucky,” claimed Rummenigge. “Hansi is doing well. In him we have a coach who fits the team. We’re playing a much better style of football than a few weeks ago. We will sit down after the last game of the year on December 21 and discuss what happens next.” Could Flick stay in post for the rest of the campaign? Possibly so.

Gladbach’s Swiss international striker Breel Embolo was the star of the show as the Foals cemented top spot in the Bundesliga with a 4-2 home win over Freiburg. Still only 22, the ex-FC Basel and Schalke frontrunner gave a masterclass in point of attack play, mobile, clever, scoring twice and making another for Patrick Herrmann. Embolo’s one minus mark – the penalty he missed early in the second-half. “I’m not sure I’ll be asked to take our next penalty,” he told Sky Deutschland. “Without the miss, it would have been the perfect afternoon.”