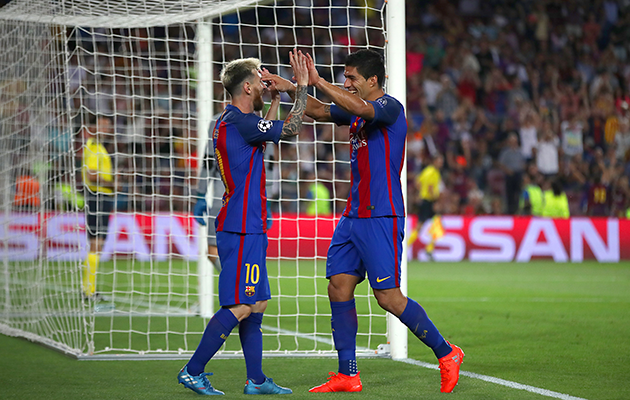 “I admire everything Barcelona stand for,” Brendan Rodgers said. Just not when they do it to him. He admitted that he felt helpless as he stood on the touchline and watched his side sliced to bits at the Camp Nou, the ball walked in over and over. The last two UK coaches to go there were beaten 7-0 – before Celtic’s defeat on Tuesday night there was Valencia’s hammering in last season’s Copa del Rey. Gary Neville described that as “unacceptable”; Rodgers described this in rather different terms. There was, he insisted, “nothing to be embarrassed about.”

This was all about Barcelona, not about Celtic, Rodgers said – and Luis Enrique tended to agree. A hat-trick from Leo Messi, two from Luis Suárez and one each from Neymar and Andres Iniesta made this their biggest victory in the European Cup; it was also Celtic’s biggest ever defeat in the competition. No European Cup-winning club had ever suffered a score-line like this. Barcelona took them apart, pass by pass, carrying the ball all the way to the net: Messi’s second was especially impressive, while perhaps the most striking thing was that five of the seven goals were scored from seven yards or less.

“About last night,” Andres Gomes tweeted, adding three “on fire” emoticons. Luis Enrique talked about: “fluidity, freshness, effectiveness”, insisting: “we were good in pressure, recovery after losing the ball, [and] we didn’t drop the pace in almost all the game.” He talked about Suarez – a man with “unlimited credit, who never stops pressing,” who you “can’t doubt for a single second” – he talked about Iniesta – he joked that he had taught him everything when they were team-mates together – and he talked about Messi, of course.

Why not play him at full back then, someone ventured. “Well, that would probably be a bit of a waste,” Luis Enrique replied.

“They have done this to better teams than us,” Rodgers insisted.

Not always, though: and that was the other thing. It was hard for some fans not to think: where was this three days ago? Barcelona’s biggest European Cup victory came in the wake of them losing 2-1 to Alavés – only the second time in fifteen years that they had been beaten at home by a newly promoted side and only the second time they had ever lost to Alavés at the Camp Nou.

That loss had come amidst rotations, with no Piqué, no Umtiti, no Sergi Roberto and with Suárez, Messi and Iniesta on the bench. It also allowed Real Madrid to go to the top of the table – for the first time in a year and a half. And while the focus turned to Europe this week, while Madrid are the defending champions, while Europe is traditionally their thing, the competition that defines them, the players were all saying the same thing: this year, the league is the priority.

“We know that’s the hardest competition to win,” said Zinedine Zidane, the coach who won the Champions League last season. They have won just one of the last eight.

It wasn’t just Barcelona; Real Madrid overtook Unión Deportiva Las Palmas too. Leaders for the first time in 38 years, they sat on top of the table for a fortnight thanks to the international break and when league football returned, they headed to Sevilla’s Sánchez Pizjuán – where the twenty club flags running around the stand are in league table order and theirs proudly flew first.

By the end, though, it had to be shifted along three places to the right after a questionable penalty and a last minute goal scored by Carlos Fernandez – a twenty-year-old, Seville-born B team striker making his debut for the club he supports – saw Sevilla come back from a goal down to win 2-1.

So what now, Las Palmas manager Quique Setien was asked. “Our aim has to be survival,” he said, “but the way we have been playing gives us good sensations and allows us to look forwards with a certain optimism, so let’s see if we can aspire to something more or at least reach the final games of the season without the pressure and tension and make the fans enjoy it, play some good games.”

Play some good games? That much is guaranteed. And that “aspire to more” does not feel misplaced: Las Palmas were never going to win the league but this is no one-off – they were superb at the back end of last season after Setien took over and imposed his vision upon them – and they have been more than good enough this season to suggest that they could be an outside bet for a European position.

Gary Neville might have been beaten 7-0 at the Camp Nou last season but those who thought that his departure was a solution – and, in fairness, there weren’t that many of them, even then – have proven predictably mistaken. What was no predictable was that things would be quite this bad. Valencia are bottom, having lost three games in row. That’s their worst start to a season in 17 years and, added to the three consecutive losses they suffered at the end of last year, it’s their worst run ever. Yes, ever.

Valencia’s problems run deep. And yet the results are something of a mystery. They really haven’t played badly enough to have lost all three this season. In fact, they have been good at times, only to waste chance after chance and then watch their defenders shoot themselves in the foot. And shoot more accurately than most of their forwards have in the process. Looking at their starting XI, they have a good side. What they don’t have is that something that it’s hard to define. A little luck, perhaps. Or something deeper? The pressure is on, that’s for sure. Pako Ayesteran was their third manager last season (fourth if you count caretaker Voro) … could he be the first sacked in Spain this season?

**After Marcelino, that is – the coach who Villarreal got rid of before the campaign even got underway.