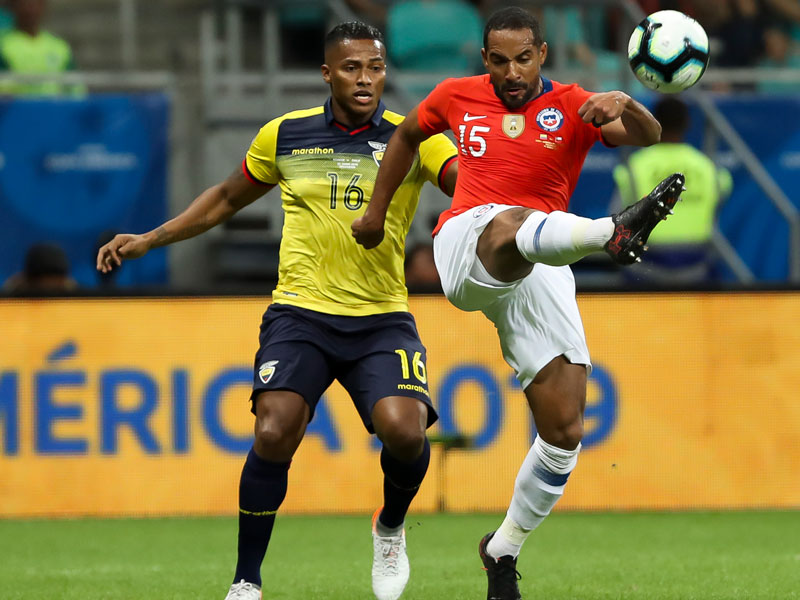 Luis Antonio Valencia has not had an easy time since saying goodbye to Manchester United and going home to Ecuador.

To start with, there was the disastrous participation of the national team in the Copa America. Ecuador were thrashed by Uruguay, lost to Chile and were held to a draw by a young, experimental Japan side. The results cost coach Hernan Dario Gomez his job – and the fall out could have brought Valencia’s international career to a close. He has 99 caps.  There are no guarantees that he will reach his century.

He is alleged to have been involved in the so-called ‘17th floor scandal,’ where some of the players were reported to have drowned their sorrows in excessive quantities of alcohol. Valencia denies any wrong doing. Not all of the local fans are inclined to believe him.

Now in the white of Liga of Quito, or LDU, Valencia recently played a local derby against Aucas. Rival supporters brought along cut outs of beer glasses and champagne bottles and yelled ‘drunkard’ at him – and he gave away a penalty in his side’s 2-1 defeat.

Liga beat fellow giants Barcelona 2-0 in their most recent fixture. But they had to do it the hard way, reduced to ten men early in the second half after Valencia was sent off. He was unhappy with the decisions against him, and commented that after almost a decade and a half away, he was feeling like a foreigner in his own country.

But he might be able to count on more local support over the next two weeks. Liga are taking part in the quarter finals of the Copa Libertadores. Going into the competition they appeared to have their best line up since becoming surprise champions in 2008, and the acquisition of a player with the experience and quality of Valencia strengthens their case. They and fellow outsiders Cerro Porteno of Paraguay stand between the prospect – both thrilling and alarming – of a River Plate v Boca Juniors semi final.

River are strong favourites against the Paraguayans, all the more so after hitting form with a 6-1 weekend win against reigning Argentine champions Racing. And Boca Juniors will be expected to overcome Liga, although here the favouritism is not clear. The Ecuadorians can count on the undoubted advantage of altitude. Quito lies 2,800 metres up the Andes, and the rarefied air is always a problem for unacclimatised visitors. Making the most of their home matches was the secret of Liga’s success back in 2008, they have a 100% home record in this year’s competition and it is hard to imagine how they can reach the semis without building up a lead on Wednesday.

Luis Antonio Valencia has already proved that he does not need altitude to get the best of Argentine opposition. Four years ago he played for the national team in Buenos Aires in the opening round of Russia 2018 qualifiers. His thrust and pace down the right was a key factor in his side’s 2-0 victory, and his direct opponent that night was Argentina left back Emanuel Mas – his likely adversary on Wednesday. Can Valencia turn the clock back and do it again over two legs? Can he help save the continent from holding its breath in the build up to a River v Boca re-run?