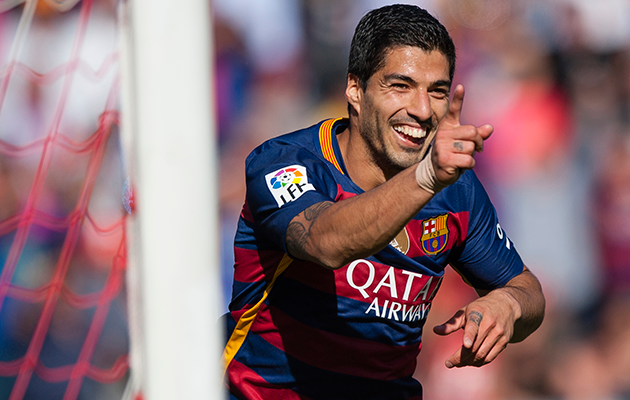 The Spanish season didn’t go right down to the wire, but almost. At half time on the final day Real Madrid withdraw Cristiano Ronaldo at Riazor, having finally admitted defeat. Madrid were 2-0 up and Ronaldo had scored them both; the problem for them, and for him, was that a thousand kilometres away in Granada Luis Suárez had scored twice too, finally putting him out of Ronaldo’s reach and Barcelona out of Madrid’s. La Liga was heading to the Camp Nou, for the sixth time in eight years.

When Luis Suarez rolled in his third late in the game, it took him to forty goals for the season, the first player other than Leo Messi or Cristiano Ronaldo to finish as top scorer since fellow Uruguayan Diego Forlán seven years earlier. It also took Barcelona to the title. It was, Gerard Piqué said, a title that they had to “win twice”. He said there was a point at which they seemed to have won it … and a point at which they seemed to have lost it too. In the end, they got it back again.

At the start of April, winning the league seemed a foregone conclusion. When Piqué scored in the clásico, it put Barcelona 1-0 up. Hang on and they would be thirteen points ahead of Madrid, but instead they lost the lead and lost the game 2-1. they didn’t win any of their next three games either, their lead at the top gone. With five games to go, Barcelona were a solitary point ahead of Madrid and only lead Atlético on the head-to-head record.

All three teams prepared for a five-game sprint for the line, knowing that they could not afford a single slip up. They had to win five out of five, Luis Enrique rightly predicted. Atlético made it to the penultimate weekend of the season when they were surprisingly defeated by already-relegated Levante; Madrid and Barcelona made it to the final day. Madrid did not slip up, but nor did Barcelona. Their response when it came to it was emphatic: five wins from five, an aggregate score of 24-0.

Comically, on the morning after the league finished La Razón opened on the headline: “Zidane, league champion.” He was not, of course, but he was rightly proud of his team’s ability to push Barcelona to the line, winning their last twelve games. And in truth there was not too much sadness among the Madrid squad as they travelled back from Galicia: they had always accepted that their fate was not in their own hands. The surprise was that they had managed to keep the going so long.

Barcelona had hung on. “Twenty years ago we wouldn’t have done,” Piqué said; back then, he added, their historic fatalism would have sunk them. But this is a different club now, one accustomed to success. Indeed, it was that fact that made it feel like ‘only’ winning the league was a disappointing season. And, in the end, having been pushed made it feel more like an occasion than if they had walked to the title with, say, three weeks to spare. 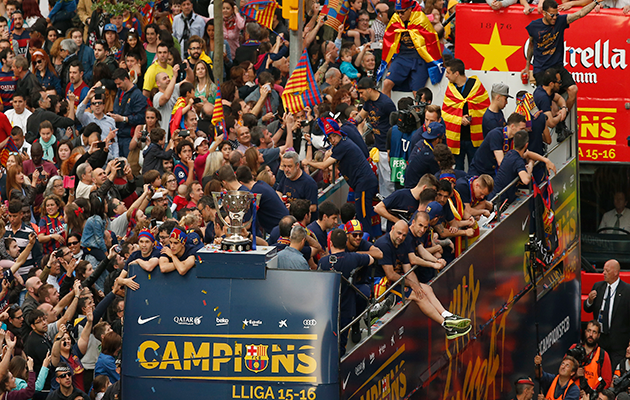 Barcelona players enjoyed an open-top bus tour of the city to mark their latest title success.

The players travelled the city on an open-topped bus, a celebration that had not originally been planned, not least as there was a Copa del Rey final to come a week later, but that they had requested. This had to be treated like a big success.

“Over the season, the most consistent team takes the title and we deserved this,” Luis Enrique said. “People think not winning a trophy is disaster but we know how difficult it is to do. If winning the league is a bad year, let’s pack up and go home. We’ve won six of eight leagues; some other teams find it harder.”

Real Madrid for example: they have won just one of the last eight. They do through have the Champions League final to come and it is getting knocked out by finalist Atlético that most hurt Barcelona. Yet final day was Barcelona’s day; no one expected they to have to wait so long, but in the end it was better this way. “Enjoy it,” Luis Enrique said.

* In Seville, Getafe’s players slowly boarded the bus in silence. In Madrid, Rayo Vallecano’s players stood and looked sadly as their fans sang to them, down but not out. And in Gijón, Sporting’s players went absolutely bonkers. The team that had never expected to make it into the first division in the first place are staying there for another season at least and the celebrations went on and on. “Now what?” coach Abelardo Fernández had been asked: “now, beer and cider,” he said.

On the final day, only one could remain and Sporting were the one. Getafe, Sporting and Rayo were fighting to avoid two relegation spots. In the end, only the team that had its fate in its own hands failed to win: Getafe were beaten 2-1 by Betis, whose fans chanted Sporting’s name, the club with whom they enjoy a kind of footballing “brotherhood”, and Rayo beat Levante. But it was not enough for them as Sporting beat Villarreal, who had nothing to play for. “We have to thank Betis,” the sporting manager admitted.

There was controversy after the Villarreal manager Marcelino, a former Sporting coach and a supporter of the club, had said that he preferred Sporting to survive. Rayo’s president and Getafe’s coach both had pointed words to say after the final day. Words like: “He’ll be happy now”. And then Marcelino’s wife said on Facebook: “Job done. We leave here with you in the first division.” It was unwise to say the least. No one in Gijón cared; they were too busy celebrating.

Abelardo, the man who described his team as “revolutionary, like Asturias”, ended in tears. Survival is unexpected, a huge achievement; it also guarantees the future for a club that was on the edge of the abyss, with over 30m euros of debt and with many fans now against the board. As so often, the team saved the club. A young squad with virtually no first division experience, whose promotion to the first division had not been expected and had come at the last minute of last season, didn’t expect to reach the final day still with a chance, still less end it a top flight team.

“I’m destroyed, exhausted mentally; these have been two extremely hard years but I’m up in the clouds now,” Abelardo said. “We love this club, and I am mad about these fans.”