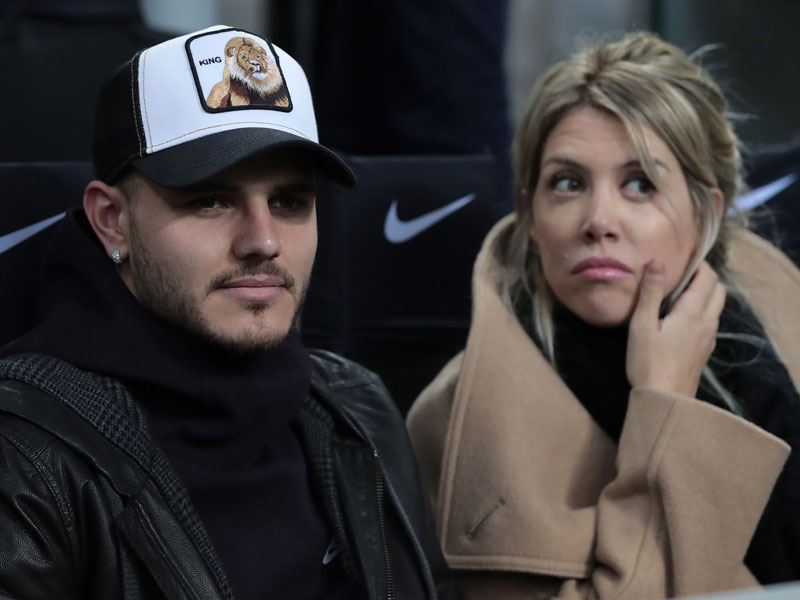 Does anyone remember Gaby Schuster? Or do you recall a certain Victoria Adams, better known of course as Mrs. “Posh Spice” Beckham?

This is certainly the case with Wanda Nara, wife of Inter’s iconic Argentine striker and captain, 26-year-old Mauro Icardi. Ever since the turn of the year, Inter have been in a bind as they attempt to sign a new contract with a player who, until recently, seemed like the untouchable “Main Man”. Currently on an after-tax €5.3 million euro salary, Icardi has reportedly asked for a significant pay rise, perhaps as much as €9 million.

The point about the contract re-negotiations is that they have not proved at all straightforward, largely because 32-year-old Ms. Nara now acts as the player’s agent. A media “wannabe”, Wanda Nara has not been shy about using social media to promote her husband, her life with her husband, her life in Milan and, crucially, to make noises about the contract negotiations. For example, at one stage last month she wrote on social media that “…we haven’t yet received a satisfactory offer from Inter…Then, there are a lot of big clubs which would like to sign Mauro…”

Inter first demonstrated how little they liked this particular line of negotiation by fining their captain €100,000 euro when he returned to Milan a day late after the post-Christmas break. Last week, they underlined the point even further when they stripped Icardi of his team captaincy, right on the eve of Inter’s 1-0 Europe League win against with Rapid Vienna, a tie decided by a penalty scored by Lautaro Martinez, the Argentine reserve and stand-in for Icardi.

Currently, Icardi is officially on the injured list, suffering from a knee problem. Sources close to Inter, however, argue that this is very much a “diplomatic” injury, pointing out that in recent times Icardi has lined out for Inter, notwithstanding the fact that his knee has been less than perfect.

Fact is that when Icardi and his media-conscious wife turned up to sit in the front row, pitch-side for Inter’s 2-1 win over Sampdoria on Sunday night, they were hardly warmly received by the Inter fans. When the giant screen focussed on the couple during the match warm-up, the image of the once favourite son was met with whistles, jeers and total scorn. Wisely enough, the local producer opted to move on to other images.

Reports suggest that even with the player’s own clan, there are those who feel that Wanda’s “influence” does not help her husband. For example, Icardi’s sister, Ivana, last week called developments in her brother’s relationship with Inter, “the story of ‘una morte annunciata’ (a death announced in advance)”. Figures in the family reportedly feel that Wanda’s aggressive marketing of her famous husband has done more harm than good, whilst they argue that she has distanced him from the rest of his family and clan.

We originally suspected that this was a lover’s tiff that will blow over, a tiff between Icardi and Inter that is. Yet, sources up at Appiano Gentile are now beginning to suggest that, even if fences are mended between now and the end of the season, Icardi’s long term future at Inter is no longer guarranteed.

Even if his buy-out contract clause puts a €110 million euro price tag on his head, sides like Real Madrid, Barcelona or PSG are all reportedly sniffing around. Apparently, they are not worried by Ms. Wanda and her taste for “Farandula”, the world of showbiz.

Just to complicate matters a little further, Inter’s great rivals, champions Juventus, announced this week via their Sports Director, Fabio Paratici, that, who knows, they might be interested in buying Icardi, telling state radio, RAI:

“There has been no recent contact between Juventus and Mrs. Icardi…As for the future, these are things that will come into play only at the end of the season”.

Was the man from Juventus just stirring it up? Or is there a real Juventus interest in an important player? Time will tell.

Whatever happens, Icardi and his wife will always represent a “heavy” ticket. For example, many fans disapprove of the fact that Wanda Nara left her first husband, Argentine Maxi Lopez, a team mate of Icardi’s at Sampdoria, after she had started an affair with the younger player, very much a rising star in the Italian firmament. Ms. Nara had three children with Maxi Lopez, children who now live with her and Mauro, whilst Lopez now plays his football for Brazilian club, Vasco Da Gama.

The Icardi-Nara-Lopez triangle is obviously a complex matter, some long way from “closure”. In the meantime, Icardi’s stormy relations with Inter will doubtless shortly be “resolved”, at least until the end of the season. As for the long run and what will happen next June, that is another story.