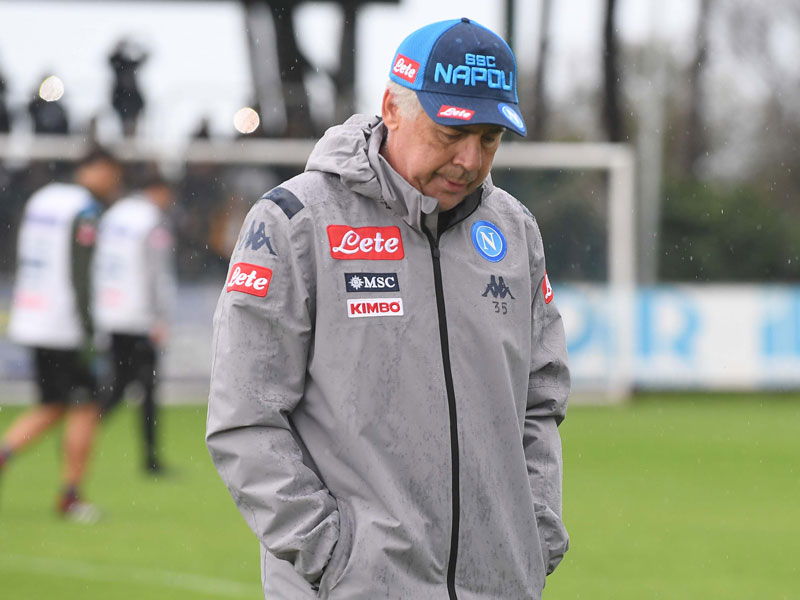 The least you could say is that Wednesday night’s Champions League clash between Liverpool and Napoli could hardly have come at a worse moment for the Serie A club. It ‘s not just that last Saturday, whilst champions Liverpool were beating Crystal Palace 2-1 to remain top of the Premier League, Napoli were being held to a 1-1 away draw with AC Milan to remain seventh in Serie A.

No, the point is that Napoli come into this week’s game at Anfield in the midst of a potentially devastating crisis which sees club owner, cinema tycoon, Aurelio De Laurentiis, threatening his star-studded squad with legal action. In short, De Laurentiis is threatening to sue his squad for €2.5 milliion euro “damages” in recompense for their “mutiny” three weeks ago.

Pior to their last Champions League game, a disappointing 1-1 home draw against Red Bull Salzburg on November 5th, De Laurentiis had called for the team to go into a “ritiro” (training camp). When Napoli then drew that game 1-1, De Laurentiis then called for the ritiro to be extended until the following Saturday’s game against Genoa.

Problem was that the players refused. Rather than go back to their rooms at the club’s Castel Volturno training centre, the players stage a mutiny and went home.

The call for the ritiro had been a response to a disappointing run of results which had seen Napoli lose to AS Roma and draw with both Atalanta and Spal in their three previous Serie A games.   Since then, things have gone from bad to worse with Napoli being held to two more draws, against Genoa and last Saturday Milan.

For a team which has pushed champions Juventus all the way in recent seasons, three times finishing second to the Old Lady, it is bitterly disappointing to find themselves 15 points behind the league leaders, so early in the season. Remember, many of us had indicated Napoli this summer as one of the few realistic pretenders to the Juventus crown.

For fans and critics alike, Saturday’s draw with AC Milan was especially disappointing. Against the former European champions, themselves struggling in a lowly 11th place in Serie A, Napoli might have done better. Instead, for much of the game, too many Napoli players under-performed, looking cautious and low on self-confidence.

There is nothing new about wealthy football club owners intervening directly in the running of the club. De Laurentiis is not a man to mix his words, as witness his occasional disagreements with the Italian fooball establishment (usually about Federation decisions, refereeing controversies that have “damaged” Napoli etc).

Now, he appears to feel that the players’ refusal to accept his training camp has damaged Napoli’s image. A heated exchange between Brazilian midfielder, Allan, and Napoli Vice-President, Edoardo De Laurentiis, son of the owner, immediately after the Salzburg draw, has further poisoned the atmosphere.

De Laurentiis senior would appear to see that altercation as an offense, a lack of respect for him. Now, he is asking a very basic, very familiar question. Namely, who signs the pay cheques around here?

Caught right in the middle of this crossfire is the Napoli coach, experienced old hand, Carlo Ancelotti. In the 18 months since he was appointed to Napoli in the summer of 2018, Ancelotti has enjoyed a seemingly very positive relationship with De Laurentis who, for example,  in May of this year told Corriere Della Sera:

“I am satisfied with Ancelotti and what he has done… By buying Ronaldo, Juventus raised the bar with regard to points but we are in line with performances of the best clubs in Europe…”

Ancelotti, however, appeared to distance himself from the club owner with regard to the mutiny, saying in a press conference prior to the 1-1 draw with Salzburg:

“If you ask me what I think (about the ritiro), I would say that I don’t agree with the club’s decision. But then the coach does a coach’s job whilst decisions like this are the club’s prerogative.”

Our Carlo, it seems, is not exactly on the same page as the club owner.

So where do we go from here? Already, media speculation suggests that Ancelotti will soon be on his way, replaced by such as ex-Roma and ex-Inter coach Luciano Spalletti or by ex-Milan coach Gennaro Gattuso. Likewise, that same speculation suggests that the leaders of the mutiny, reportedly Belgian Dries Mertens, Senegal’s Kalibou Koulibaly, Brazilian Allan, Lorenzo Insigne and Spaniard José Callejon, will also be leaving Napoli, probably next June if not sooner in some cases.

That speculation may be exaggerated but there is no denying that all is far from well in the Napoli camp. A lot of water has flown under the bridge since Napoli opened up their Champions League campaign with an impressive 2-0 home win against Liverpool. Two months later, the odds against a repeat win seem very long.

“Pride and dignity? The team lost those weeks ago. From the juridical viewpoint, Napoli is a company whose major shareholder is Aurelio De Laurentiis… Players who lack conviction and comittment on the field, they are the negative protagonists of this business…

Not exactly an optimistic match preview, is it?