Skipper Neymar and six-goal hosts Brazil will play in the Olympic Games gold medal match in Maracana on Friday after running away with their semi-final against rank outsiders Honduras.

In Saturday’s final, also in Maracana, Rogerio Micale’s men will play first-time finalists Germany who defeated Nigeria 2-0 in the other semi-final, in Sao Paulo. This will mean a new name on the Olympic football roll of honour. Brazil have won silver three times but unified Germany no medal at all (East Germany won gold in 1976).

Where Brazil’s women had failed to find the net in 120 minutes in their semi-final against Sweden the previous day, also in Maracana, the men led 3-0 after half an hour and could easily have scored more than the eventual half-dozen had they wanted.

Neymar opened the scoring after only 15 seconds before Gabriel Jesus struck twice. Marquinhos stabbed a fourth early in the second half, Luan added a fifth and Neymar clipped home a stoppage time penalty.

But Neymar’s opening goal is the one which will be remembered for the speed of both thought and action within seconds of the kickoff. He caught dawdling central defender Johnny Palacios in possession and dashed on to reach the ball moments before colliding with onrushing goalkeeper Luis Lopez.

The ball bounced on into the net and Brazil, to all intents and purposes, were on their way to within 90 minutes of fulfilling their dream of winning that long-awaited Olympic gold medal in front of their own fans.

Brazil fans’ hearts were in the mouths for some moments as Neymar collapsed while in mid-celebration and had to be carried off. But, in true Neymar fashion, he was soon back up and rejoining the action.

Gabriel Jesus put his own awful start to the Olympics behind him with two smartly-taken goals after 25 and 34 minutes, each time slicing the Honduras apart with exciting dashes in from the left. 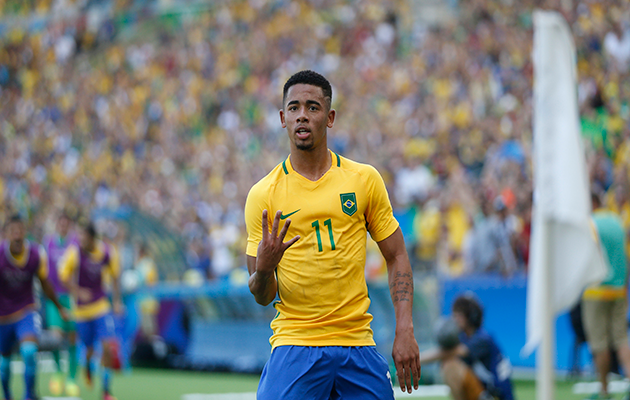 Brazil’s Gabriel Jesus celebrates scoring in the 6-0 victory over Honduras.

Marquinhos, the defender who upset French champions Paris Saint-Germain by insisting on playing in the Games, scored No4 from close range 10 minutes into the second half. He almost fell over his own feet before prodding home from Neymar’s left-wing corner.

Honduras, to their credit, kept going to the end against vastly superior opposition and drew two sharp, late saves out of otherwise unemployed Brazilian goalkeeper Weverton.

But Brazil, just to remind them of the established order, struck a fifth through Luan who was then brought down from behind so Neymar, from the penalty spot, could end the match as he had begun it, with a goal.

After a poor start to their campaign, Brazil have improved from game to game. Honduras were by far the weakest of the four semi-finalists but the confidence of a winning momentum is important and the draw had smiled on the hosts who will be favourites for the final.

Arsene Wenger conspires in his and Arsenal’s downfall