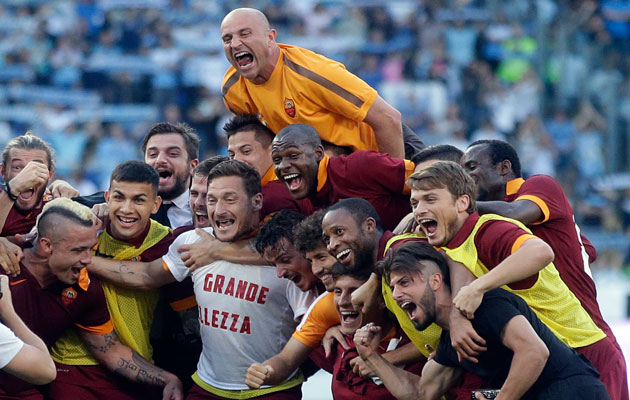 These have been hard times for Lazio, one of the currently most in-form Serie A sides but twice narrowly beaten in the last week in key fixtures at the Olimpico. It was painful enough for the Lazio fans to lose last week’s Italian Cup Final 2-1 in extra time to champions Juventus but it was arguably much more painful for them to lose last night’s bitterly contested city derby to Roma, again losing 2-1.

Adding to the fierce rivalry which always underpins the Rome derby was the important consideration that Champions League qualification hung in the balance. Second-placed Roma had gone into the game on 67 points, just one ahead of third-placed Lazio.

At stake, essentially, was which of the two Roman sides would finish second in the league, thus qualifying for the Champions League group phase, in the process avoiding the midsummer preliminary qualifying rounds reserved for the 3rd placed team and always much feared by Italian sides.

Roma are now officially second while Lazio’s late season torment now sees them play fourth-placed Napoli in Naples on next Sunday’s last day of the season in a virtual Champions League play-off. Lazio qualify if they win or draw but Napoli qualify if they win.

As in the Cup Final against Juventus, Lazio will again feel themselves a little unlucky in last night’s derby. In a very tense, tight game, Lazio had much the better of a first half when Roma uncharacteristically opted to shut up shop and when Lazio might have taken an early lead with a difficult diving header by German ace marksman, Miroslav Klose.

Roma were a much more potent second half force, especially after ageing talisman Francesco Totti was substituted by Colombian striker Victor Ibarbo and Malian Seydou Keita replaced by Bosnian Miralem Pjanic. The Bosnian provided an alacrity of foot and thought that was missing from Totti’s game while Ibarbo had a key role in Roma’s 73rd-minute opening goal, scored by Argentinian Juan Iturbe.
Lazio got back into the game with a splendid headed goal from Serbian substitute, Filip Djordjevic, in the 81st minute but Roma wrapped it up with a headed goal from ex-Newcastle and France defender Mapoul Yanga-Mbiwa just four minutes later. 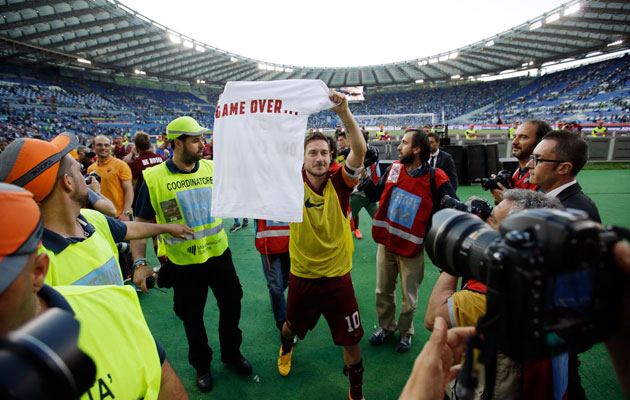 Needless to say, the fun and games did not stop with the final whistle. Roma captain Totti brandished a T-shirt that signalled, “Game Over”, while the two coaches, Stefano Pioli of Lazio and Frenchman Rudi Garcia of Roma, exchanged insults. The build-up to the game had been marked by a bitter polemic between the two clubs when Lazio had succeeded in having the game put back by a day to Monday rather than Sunday, given that they had played Juventus in Wednesday night’s Cup Final.

The Roma entourage argued that Lazio owner, Claudio Lotito, had abused his position as a Federation councillor to ensure the date change for the derby. Before the match, Garcia had jeered Lazio about the change prompting Lazio coach Pioli to comment: “I’m always glad to see foreign coaches coming into Italian football. I always think we have something to learn from them but I have to conclude that after a bit of time here, they’re worse than us and that’s not a pretty thing.”

When the two coaches “bumped” into one another on their way up from the dressing room to the post-match press conference, the insults continued with Pioli calling  Garcia a “liar”, to which Garcia replied “rodent”. There never was much love lost in Rome derbies.

On a more predictable note, it has to be recorded that there is no stopping the Juventus bandwagon. Having won the Italian Cup with a 109th-minute extra-time goal from reserve striker Alessandro Matri in mid-week, the Old Lady continued her triumphal march with a 3-1 home win against Napoli.
Winning is a very healthy habit for a football team and in that regard it is worth noting that coach Massmiliano Allegri fielded a strong side against Napoli, including the likes of Buffon, Barzagli, Marchisio, Pogba, Pirlo, Pereyra and Morata, even though the game was a purely academic exercise for the Old Lady. Against Verona for their last Serie A game of the season on Saturday evening, you can expect another very strong line-up as Juventus warm up for the Champions League Final, one week later.

With regard to that Final, Juventus yesterday registered a possible injury exclusion in the shape of central defender Andrea Barzagli who has a thigh muscle problem. Barzagli’s non-availability is hardly a crucial problem for Allegri, however, given that he still has three central defenders in Giorgio Chiellini, Leonardo Bonucci and Angelo Ogbonna, as well as full-backs Patrice Evra, Stephan Lichtsteiner and the versatile Simone Padoin in his squad.

We reported last week on how the president of the Italian Amateur League, Felice Belloli, had walked himself into a major row by denigrating women’s football. Belloli had allegedly complained at a federation meeting last March about funding for women’s football, saying: “That’s enough. We can’t spend all our time talking about giving money to four lesbians.”

Within a week of his comments becoming public knowledge, Mr. Belloli was sacked, with the federation’s Amateur Football council unanimously backing a vote of “no confidence”. Not for the first time in Italian football, justice (of a sort) was seen to be done and done quickly, too.
Speaker of the Lower House, former UN spokesperson, Laura Boldrini, commented: “Italy’s women footballers have scored their best ever goal. Let us hope that this is indeed a concrete sign of change.”