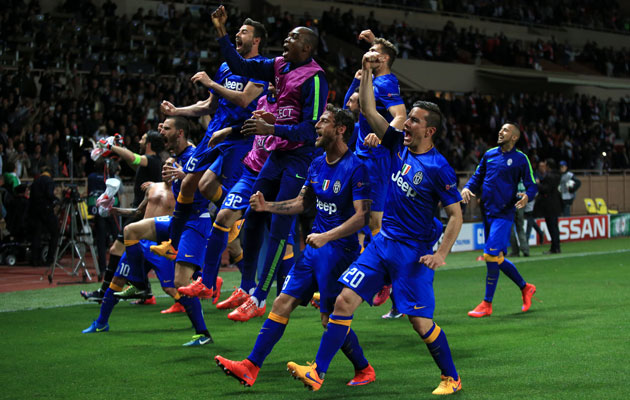 Italian sports media gave an understandably enthusiastic reaction today to the realisation that, for the first time in five years, a Serie A team has made it to the semi-final stages of the Champions League.

Following a not too impressive 0-0 away draw with French club, Monaco, the “Old Lady” of Turin, namely Juventus, is set to fly the Italian flag for at least a little longer in Europe’s premier competition.

The five year long lack of Italian success in the Champions League, during a period when the Italian national team were twice ignominiously eliminated from the first round of the World Cup, seemed to suggest that Italian football was emphatically launched on the road to Decline and Fall.   The Old Lady’s semi-final qualification certainly does not mean that Italian football has turned any corner but it represents a welcome shot in the arm.

“We are still a long way from the earnings of clubs like Real, Barcelona and Bayern, the other semi-finallists, but…at least we’re playing in the same league, and not just in terms of football.  The success (of Juventus) gives the club the chance to initiate a winning cycle during which, paradoxically, even the sales of players like Pogba and Vidal could represent an opportunity…”, commented sports daily, Gazzetta Dello Sport.

Many Italian commentators acknowledged that the dour, defensive 0-0 draw against Monaco had been a poor performance by a Juventus side which basically went looking for the scoreless draw that would qualify them.   Key players such as Argentine striker Carlos Tevez, Spanish winger Alvaro Morata and Chilean midfielder Arturo Vidal played some long way below their best, leaving it to the experienced defensive quartet of goalkeeper Gigi Buffon and central defenders Giorgio Chiellini, Leonardo Bonucci and Andrea Barzagli to save the day for the “Old Lady”:

“If a Juventus that plays as badly as this can still pull it off, what are we to expect in the future.   In the meantime, it is already an achievment to be back amongst the first four in Europe”, commented Rome daily, La Repubblica.

The fact that Juve’s first semi-final appearance in 12 years co-incides with the presence of two sides, Fiorentina and Napoli, in two Europa League quarter-finals tonight, respectively against Dinamo Kiev and Wolfsburg, further underlines this unexpectedly positive moment for Italian football.   Given that both sides picked up good results in the first, away legs with Napoli winnng 4-1 in Germany and Fiorentina drawing 1-1 in Ukraine, further Italian success tonight is clearly not out of the question.

Throughout much of Juve’s Champions League run this season, Dame Fortune has appeared to be on the Old Lady’s side.   That was never more obvious than in their quarter final tie with Monaco where the French side were, in the end, eliminated by a debatable first leg penalty awarded to Juventus and scored by Vidal.  Not for nothing, Monaco’s Portuguese coach Leonardo Jarim said after last night’s game that, whatever else, this tie had “not been decided by the quality of the players”.

How far Juventus can go from here remains to be seen.   Most observers would argue that the Italian champions are the weakest of the four teams left in the competition.   That may be.   In the meantime, Italian football is preparing to enjoy the moment, with Gazzetta Dello Sport commenting:

“Whatever way Juve’s European run ends, the Old Lady has become a young starlet who can show the entire Italian football movement the right way to get out of our current crisis.”