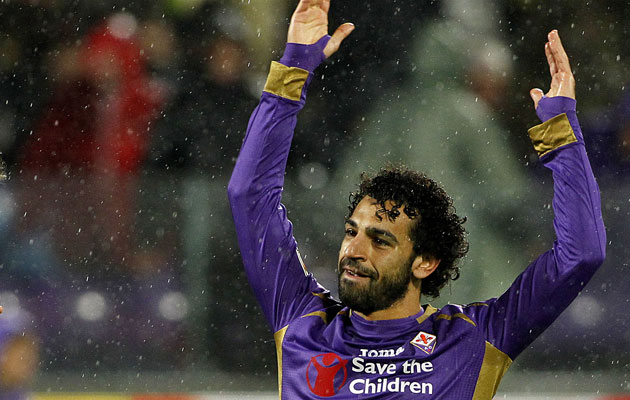 Are Fiorentina about to put a spanner in the thus far, all-conquering Juventus works? The Italian champions, 14 points clear of Roma in Serie A, have looked to have the league title sewn up for at least two months now. Furthermore, they are still on course in the Champions League, with a quarter final clash against French side Monaco next week.

Fiorentina, however, could prompt a rare setback in the Old Lady’s season tonight when they go into the second and home leg of their Italian Cup semi-final tie with Juventus with a 2-1 lead from the first leg in Turin. That was a game in which Fiorentina’s Egyptian striker Mohamed Salah proved the hero of the hour, scoring both his side’s goals, with the first of them coming after a spectacular 70-yard run from the edge of the Fiorentina penalty area.

Former Chelsea striker Salah, who will probably be partnered by German Mario Gomez in attack tonight, scored his seventh goal since joining Fiorentina in January in the Florence club’s 2-0 home win against Sampdoria on Easter Saturday. That win moved in form Fiorentina past Sampdoria and into fourth place on 49 points, six behind third placed Lazio.

Fiorentina coach Vincenzo Montella is understandably wary of Juventus but he concedes that his team is in excellent form whilst he hopes that the 2-1 first leg lead, allied to strong home fan support against historically bitter rivals Juventus, will do the trick.

Any idea that Juventus might be tempted to abandon the Italian Cup as a needless lost cause seems to be undermined by the quality of their line-up. Coach Massimiliano Allegri fields his strongest attack of the moment, led by Argentinian Carlos Tevez and Spaniard Alvaro Morata. Even if he is without Andrea Pirlo and Paul Pogba, both injured, he still fields a strong midfield led by Claudio Marchisio, with Chilean Arturo Vidal and Argentine Roberto Pereyra alongside him.

Last Saturday’s 1-0 Roma home win over Napoli may have damaged more than Napoli’s Champions League pretensions. In five games since the beginning of last month, Napoli have picked up just two points, sinking from third place in Serie A to sixth on 47 points, fully eight behind third-placed Lazio and the Champions League zone.

While Roma’s hard-earned win keeps them one point clear of their city cousins Lazio, all was not sweetness and light for Rudi Garcia’s club. The aftermath of the game was marked by a sustained polemic caused by a Roma fan banner, critical of Antonella Leardi, mother of Ciro Esposito, the Napoli fan killed (allegedly by a Roma ultra) prior to last May’s Italian Cup final between Napoli and Fiorentina, a game played at the Olympic Stadium in Rome.

Apparently referring to the fact that Esposito’s mother was in Rome last week to promote her book, “Ciro Lives”, about the death of her son, the Roma fans commented: “What a sad business. You are making money out of your son’s death with books and interviews.”

Ms. Leardi has already explained that any revenue generated by the book will be directed to projects in the camorra-infested Naples area of Scampia. Some Roma fans, however, either do not believe her or simply fail to understand.

In the meantime, Angelo Pisani, lawyer for the Esposito family, has called for a series of (highly unlikely) sanctions against Roma, including the detraction of five points, the banning of the Olimpico and the payment of damages to the family.

Aggravating the whole issue was the Roma response to the banner. The club waited two days before issuing a generic statement which listed six of the most recent football-related deaths in Italy including that of Ciro Esposito, calling them all a defeat for “civil society”. Roma were, however, silent on the behaviour of their own banner touting fans last Saturday.

Is it possible that media tycoon Silvio Berlusconi is finally ready to sell a majority shareholding in his much loved Milan? Italian media reports of the last week suggest that at least two people, Thai financier Bee Taechaubol and Hong Kong businessman Richard Lee, have both recently contacted Mr. Berlusconi with a view to buying the club.

At this stage, it would appear that financier Taechaubol represents the most serious offer on the table. He has reportedly already concluded a preliminary agreement pendant on the conclusion of a “due diligence” assessment of the Milan books. (The club is expected to return a 2014 annual deficit of approx. 60 million euro).

The asking price of Milan remains difficult to calculate but “Gazzetta Dello Sport” reports that Taechaubol has offered 500 million euro for a 60 per cent shareholding. Given that other subjects, including Richard Lee, could become involved in an “auction” for Milan, it seems certain that negotiations re the club will prove lengthy.

On top of that, there is the consideration that Mr. Berlusconi, leader of his own centre right party, Forza Italia, is expected to be much involved in Italian regional elections this spring. It could be that the media tycoon will wait until after the May elections before finally agreeing to sell the club, given the potentially negative electoral impact of his withdrawl from Italian football.

For example, the 20 million euro transfer of Mario Balotelli from Manchester City to Milan in January 2013 was calculated to be worth approximately 400,000 votes for Mr. Berlusconi’s centre-right coalition. That purchase was made just weeks before Italy went to the polls in a March 2013 General Election. Remember, being a football “winner” has always greatly helped plug Mr. Berlusconi into the psyche of the “popolo”.

If Mr. Berlusconi opts to listen to those close advisors who urge him to sell the club, we could be looking at a remarkable “one-two”. After all, it was only two autumns back that Indonesian Erick Thohir purchased a 70 per cent shareholding in Internazionale for 250 million euro.

Italian football, it would seem, is ever more on the international market, looking for badly needed investors.