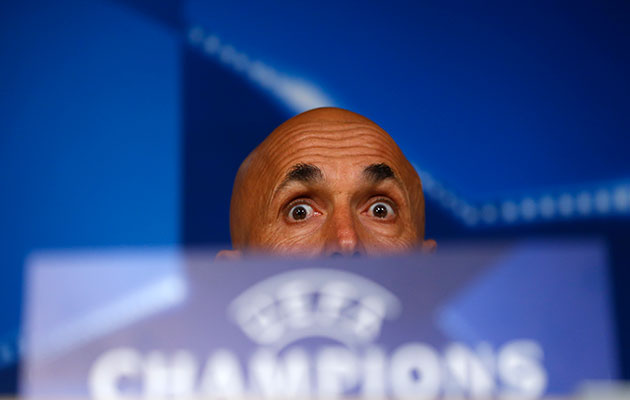 In their time, Roma fans have had to deal with no small pain when it comes to crunch Champions Leaque ties.   A 7-1 thrashing by Manchester United at Old Trafford back in April 2007, a defeat by the same scoreline at home to Bayern Munich in the autumn of last season and another humiliation, beaten 6-1 by Barcelona at the Nou Camp in this year’s group phase, are still painfully implanted into the Roma collective memory.

So, then, given those precedents, it would seem only fair and reasonable to assume that Luciano Spalletti’s team heads off to Madrid for a return leg tie tomorrow night (Tuesday) against Real Madrdid, with at the very least, limited expectations.   2-0 down from the first leg in Rome – where Roma did not play badly – the first order of the day is “avoid making a show of yourselves”, ie. limit the damages.

Just to make matters, worse, of course, Real showed no mercy in a 7-1 defeat (that scoreline again) of Celta Vigo in the Liga last Saturday.   On top of that, the boy Ronaldo, who played a fundamental part in the 2-0 first leg defeat of Roma, was on the scoreboard again, knocking home four goals no less.

So, all in all, do Roma head off to the Bernabeu as mere sacrificial lambs to the Real slaughter?   Ironically, however, all may not be lost for this Roma.   For a start, Roma come into the game on the back of seven straight Serie A wins, with returning coach Spalletti having apparently got his side back on the rails during his almost two months in charge since taking over from Frenchman Rudi Garcia in early January.  Roma are currently third in Serie A, five points behind second placed Napoli, 11 behind leaders Juventus.

For a second, the least that one can say is that Roma travel to Madrid with the pressure off, in that not even the most diehard Roma fan really believes the team can  do anymore than avoid another humiliation.   Curiously, some 2,500 Roma fans are expected to travel for this game.   Perhaps, they are encouraged by historical precedent.   After all, back in 2008, Roma, then also coached by Spalletti, won their way through to the quarter-finals of the Champions League by beating Real 2-1 at the Bernabeu, thanks to goals from Brazilian Taddei and Montenegrin Mirko Vucinic.

If Roma were in search of other comfortable omens, they need look no further than their Malian midfielder, ex-Barcelona star, 36-year-old Seydou Keita.   In 17 clashes with Real, he has been on the winning side on 11 occasions.

It is intriuging that, under Spalletti, Keita has regained a position of pivotal importance.   Tomorrow night (Tonight) he is expected to play alongside Bosnian schemer Miralem Pjanic behind the trio of Stephan El Shaarawy, Egyptian Mohamed Salah and Argentine Diego Perotti with the attack led by central striker, Bosnian Edin Dzeko.

If Real were alarmingly impressive in their 7-1 destruction of Celta Vigo on Saturday, Roma were no less impressive in a 4-1 defeat of Fiorentina on Friday night.   The ease with which they disposed of the team that is supposed to be contesting third place and a Champions League spot with them was unexpected, confirming the good work currently being done by Spalletti.

For now and most probably for the forseeable future, there will be little space in the Spalletti project for Roma’s favourite son, Francesco Totti.  He will be in the squad for the Madrid game but he is not expected to play.    Still, no one who saw last Friday night’s game versus Fiorentina was left in any doubt about the peculiar nature of the relationship between 39-year-old Totti and Roma. 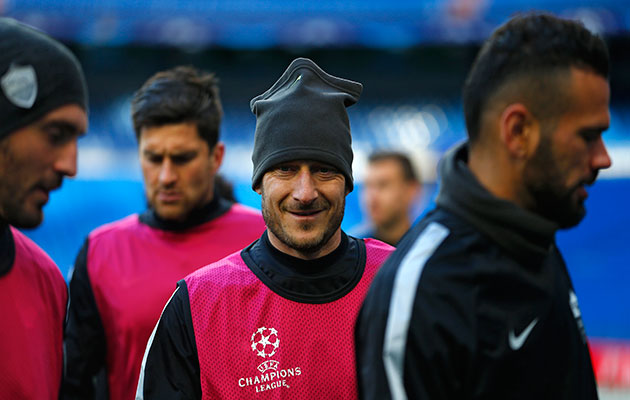 Brought on for the last quarter hour of the game, Totti did little but, whatever little he did, it greatly pleased the Roma fans.   The fans’ delight almost knew no bounds when Totti hit the post with a late free kick.   Watching the game, former Inter and Italy player, Beppe Bergomi, commented: “There is nothing in football quite like the relationship of this guy to this club, to this city…”

Roma will hope that Totti’s presence on the bench works for them Tonight.   Even if Roma do not expect to progress any further in the Champions League, they can at least save some pride, in the process protecting their good recent run.   Maybe, Totti will get another quarter hour run-out, too.