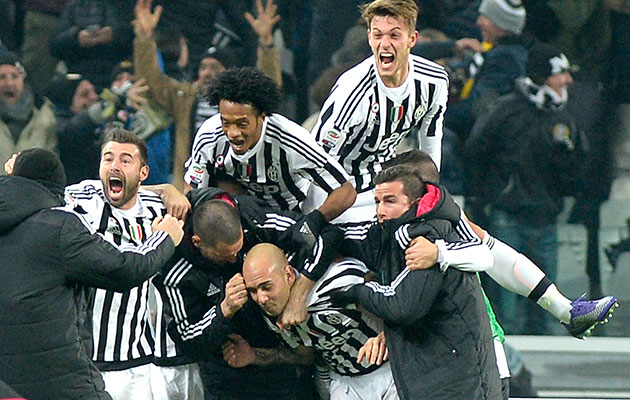 The “Old Lady” has put the church back in the centre of the village. Reigning champions Juventus completed a remarkable comeback when defeating Napoli 1-0 at the Juventus stadium on Saturday night, to go to the top of the Serie A table for the first time this season.

Juventus won the battle but it remains to be seen if that means they will emerge victorious when the Serie A war ends in May. Rarely in the last decade has a Serie A top of the table clash generated as much pre-match as this “battle of the titans”.

In the end, as so often happens when the pressure is on, Juve-Napoli turned out to be a cautious, tight affair in which the tactical discipline and defensive organisation of both sides won out on attacking flair and individual genius. In the end, when the game seemed well and truly headed for a 0-0 draw, Juventus snatched the three points with an 88th minute, deflected goal from substitute striker Michele Zaza.

Until then, both goalkeepers had been largely idle bystanders in an absorbing, evenly balanced game that lacked any real “fireworks”. In truth, until Zaza’s goal, both sides had had only one real goalscoring chance. In the first half, the imperious Leonardo Bonucci had cleared an inviting cross from Napoli’s right back, Albanian Elseid Hysaj, just 0.05 of a second before Argentine Gonzalo Higuain headed it home.

Midway through the second half, Frenchman Paul Pogba contolled a long diagonal pass brilliantly on the edge of the area before setting up a glorious chance for Argentine Paulo Dybala. However, Juve’s new wonder boy hit his curving shot narrowly over the bar.

Until then, this had been a game when the various super stars such as Higuain, Lorenzo Insigne, José Callejon and Marek Hamsik for Napoli and Dybala, Alvaro Morata, Paul Pogba and Juan Cuadrado for Juve had been largely cancelled by two good defences. Napoli ended the match with a 56%-44% domination of possession but they spent much of their time hitting square balls as Juve midfielders Claudio Marchisio and German Sami Khedira provided ample cover for the four man defence of Stephan Lichtsteiner, Bonucci, Andrea Barzagli and Patrice Evra.

Some critics will argue that, given that Juventus were without at least one key player in injured defender Giorgio Chiellini and that Bonucci had to limp off early in the second half, then this game represted an irrepeatable opportunity for Napoli. Perhaps…although we would have our doubts.

Those who suggest that Napoli’s Higuain failed to perform on the big day overlook the fact the Argentine received very little service up front, being more than effectively shut out by Barzagli and/or Bonucci when he did get the ball.

Which brings us to the goal. When Juventus brought on Brazilian defender Alex Sandro in place of striker Dybala in the 86th minute, it seemed that coach Massimiliano Allegri had settled for a draw. Within two minutes, the same Alex Sandro was in action winning a high punt out of defence that found its way to Zaza on the edge of the area.

This was a game that Napoli probably could and should have drawn. The big question now concerns just what psychological impact this defeat will have. The answer will come on Monday week when Napoli are at home to sixth placed Milan a side who confirmed their recent good form when beating Genoa 2-1 yesterday. For their part, new leaders Juventus are away to Roberto Donadoni’s Bologna on Friday evening.

Obviously, too, much will now depend on the cup campaigns of both sides, with Napoli due to face Villareal in the Europa League next Thursday and with Juventus due to play Bayern Munich in a Champions League, second round tie on February 23rd.

After the game, Napoli coach Maurizio Sarri, whilst clearly disappointed, still did not sound like a man in the grip of desperation, saying:

“It was a very tight game and we gave nothing away. On the contrary, we had one more chance than Juventus. The game was evenly balanced, decided by one episode. If you were watching on TV and turned off your set in the 87th minute, you would have found it hard to believe that we lost…”

For his part, Juventus counterpart Allegri sounded like a very content man. Remember, after six days of the season, his Juventus were at the bottom end of the table with just five points. Furthermore, he was obviously satisfied with his decision to bring on Zaza, in place of Morata, one hour into the game, saying:

“Zaza proved that he is a very good striker…Remember, I was the one who blocked the sale of Zaza last month”.