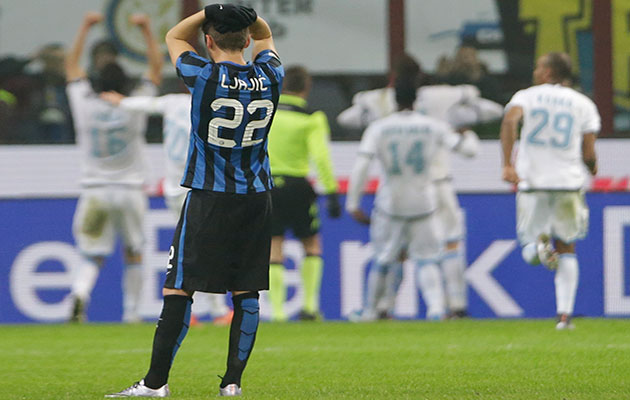 Just when you thought that matters at the top of Serie A were beginning to sort themselves out, along comes last weekend. Of the top five, only leaders Inter Milan lost whilst Fiorentina, Napoli, Juventus and Roma all won to leave us with a league table in which just four points cover the leading five. As we head into the New Year, this was, from the neutral viewpoint obviously, an absolutely ideal set of results. All is clearly still to play for.

Undoubtedly, the most suprising result was Lazio’s 2-1 defeat of Inter at the San Siro. Roberto Mancini’s side has not always convinced but it has continued to pick up points, through thick and thin. Inter have been nothing if not the most regular side of this autumn.

This time, however, Inter neither convinced nor picked up the points in a performance which got off to a bad start, with a 5th minute goal from Lazio’s Antonio Candreva which seemed to suggest that not all Inter player minds were fully focussed on the task in hand. Perhaps this had something to do with the contrasting psychological well-being of the two teams.

For long periods, Lazio played like a side with nothing to lose. After all, they came into the game in the bottom half of the table, in 12th place, not having won a Serie A game since they beat Torino 3-0 at the end of October. Arguably, they could “give it a lash”, as Jack Charlton used to say, safe in the knowledge that another defeat, this time against the current league leaders, would be no tragedy.

Inter, on the other hand, started off like a team that was concerned it had forgotten to order the taxi to get them to airport in time for their Christmas holidays. Remember, this was the last Serie A day of the calendar year, 2015, with the campionato now closing down until January 6th.

For most of the first half, Inter appeared to be shell-shocked, struggling to deal with both a surprisingly lively Lazio and their own top of the table tag. Even a 61st minute equaliser from Argentine Mauro Icardi could not turn things around for them as they continued to be outwitted by an excellent Lazio in which Argentine Lucas Biglia, Brazilian Felipe Anderson and, above all, Candreva tended to mesmerise them.

For all that, Inter would have picked up a barely deserved home point were not for an unfortunate moment of over aggressive defence by their midfield hard man, Brazilian Felipe Melo, in the 87th minute. Melo clattered unnecessarily into Serb Sergei Milinkovic to concede a clear penalty. Just to prove the point that this was not be Inter’s night, their Slovene goalkeeper Samir Handanovic pulled off a brilliant save from Candreva’s hard hit penalty, only to see his rebound fall to the feet of the all too grateful Lazio man. 1-2 for Lazio.

An obviously upset Melo, annoyed with himself for this mistake, hardly made matters better when three minutes later he felled Bigas with a clumsy, high tackle that seemed to take its inspiration from that infamous Eric Cantona kung fu kick at Cyrstal Palace back in 1995. Put simply, this was neither Melo’s nor Inter’s night.

If Inter had their problems, at least two of their closest rivals, Juventus and Napoli, showed further ominously good form. The “Old Lady” got a surprise when plucky little Carpi, facing the champions at home (in Modena), opened the scoring with a 15th minute goal scored by much travelled ex-Juve, ex-Roma, ex-West Ham striker Marco Boriello.

Juve regained her composure with first half goals from Croat Mario Mandzukic, whilst Paul Pogba put the game to bed with a 50th minute goal. At that point, the shouting should have been over, were it not for an uncharacteristic loss of concentration that saw defender Leonardo Bonucci concede an injury time own goal. With the score at 2-3 for Juve, the champions even afforded Carpi midfielder Lorenzo Lollo a chance to snatch an improbable, last gasp equaliser.

This latter chance prompted arguably the day’s most comical moment as an infuriated Juventus coach, Massimiliano Allegri, first threw off his overcoat and then his suit jacket as he worked himself into an apoplectic fit of anger at his team’s lack of concentration. Afterwards Allegri explained that, frankly, it was better to throw away his coats than to throw away two vital points.

One side not throwing away points was third-placed Napoli. They had a tough enough assignment away to ultra-competitive Atalanta. Not for the first time, hero of the hour for Napoli was Argentine Gonzalo Higuain, scorer of two second half goals in their 1-3 win. At this point, Higuain has scored a remarkable 16 goals in 17 Serie A games. If there is a better player in the entire Serie A this season, we have yet to see him. Higuain has always been a class act but, just at the moment, he is a class act on fire as he continues to inspire a million Neapolitan dreams. 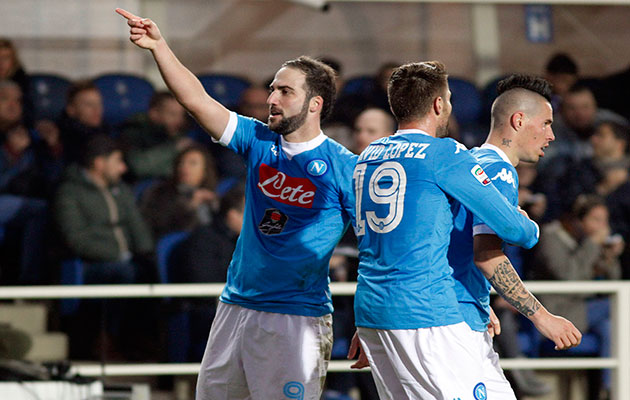 Second placed Fiorentina, put in their place last week in a 3-1 defeat by Juventus, overcame that setback to see off Chievo 2-0 at home. Signficantly, team president Andrea Della Valle indicated that he might be out there on the January market place in an attempt to strengthen an obviously overstretched Fiorentina squad.

Finally, last but not least, Roma’s French coach, Rudi Garcia, earned an at least temporary reprieve when Roma saw off Genoa 2-0 at home, just days after their infamous Italian Cup elimination at the hands of Serie B mid-table team, La Spezia. Neither Roma nor Garcia are out of the woods yet but, despite all their problems and despite a 6-1 drubbing by Barcelona, they go into the New Year still in the Champions League and fifth in Serie A, four points behind Inter and just one behind fourth-placed Juventus. Football is indeed a funny old game. Buon Natale e Buon Anno A Tutti.