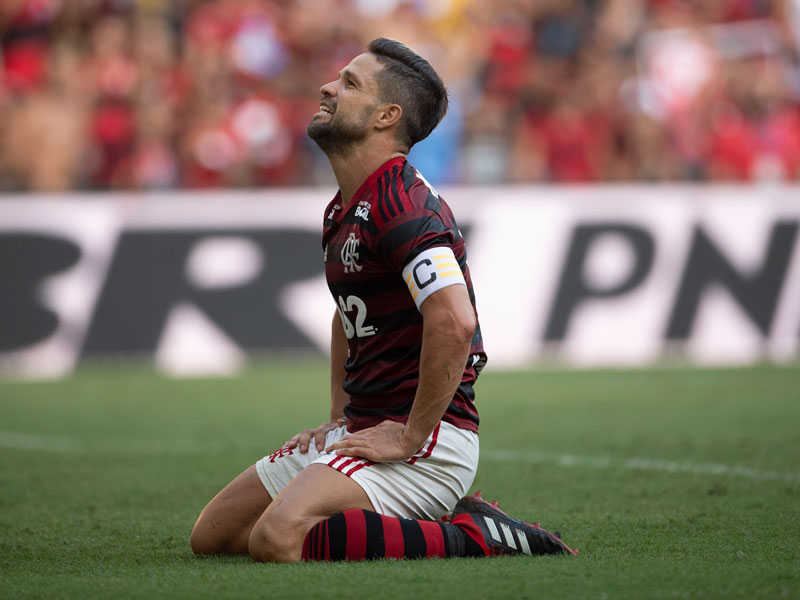 Only once, in the 1981 heyday of the great Zico, have Rio de Janeiro giants Flamengo won the Copa Libertadores.

This is a cause of immense frustration to the club’s millions of followers – especially as they have not even come close to a second win in a long, long time. A quarter final appearance in 2010 has been their best run in the competition for over a quarter of a century.

Recent events have been especially traumatic. Last year Flamengo fell in the first knock out round. In the previous three campaigns they underwent the humiliation of failing to make it out of the group phase.

The margins, though, have been agonising. In 2017 they looked safe bets for a place in the last 16 until conceding an injury time goal against San Lorenzo.  The memory of 2012 is even more painful. A 3-0 win over Lanus of Argentina would be enough in the final group game – providing the other match finished in a draw. The news was good. Emelec of Ecuador were tied at 1-1 with Olimpia of Paraguay.  In the 87th minute Emelec scored. It seemed that Flamengo were out. The game in Rio had just finished, but fans stayed on in the stadium waiting for news from Ecuador.Wild celebrations broke out when Olimpia managed a 91st minute equaliser. Flamengo were safe! But Emelec charged straight up the other end to score the winner, dooming the Brazilians to another year of failure and frustration.

These traumas are alive and ill in the minds of the club’s fans – and so nerves are jangling ahead of Wednesday night’s final round.

Flamengo top the table. But, in a three-way race, theirs is a precarious lead. In the mix are LDU, Liga of Quito, the only Ecuadorian team to have won the title. They are at home to San Jose of Bolivia – a match they should win. Flamengo, meanwhile, are up against Penarol of Uruguay. The two teams are level on points. Flamengo have the better goal difference. A draw, then, will qualify the Brazilians. But the Uruguayans are at home – and after beating Flamengo 1-0 in the Maracana last month, they are confident of a repeat job in front of their own fans. Wins for Penarol and Liga – two entirely plausible results – would bring yet another early end to a Flamengo Libertadores campaign.

Failure to get out of the group this time would be particularly traumatic. In most of the recent flops, the team was not seen as a leading contender for the title. The club might be huge, but the financial problems have been even bigger. Priority was given to straightening out affairs off the field. The fans understood this with surprising patience; swagger, boasting and braggadocio about future triumphs are part of Flamengo’s DNA.

And so now, with the finances in order and plenty of money spent on the squad, reserves of patience are extremely low. Success on the field is now more than an expectation. It has become a near obligation. The thought of an early exit from the Libertadores is simultaneously unthinkable and all too easy to imagine. This means that the players and the coaching staff are simmering away in a pressure cooker.

Veteran coach Abel Braga was brought in to take charge at the start of the year. The choice owes much to the success last year of Luiz Felipe Scolari with Palmeiras. A deep squad, it is thought, needs a charismatic father figure to deal with all the egos in the dressing room. But at the first sign of potential failure, the calls have come in for a change of coach. There has been much media debate about whether Braga should be sacked – almost as if the environment has become so contaminated with manic depressive hysteria that some are already bracing themselves for defeat on Wednesday night.

But of all Flamengo’s twentieth century displays in the Libertadores, few have been as impressive as the 3-1 home win over Liga in mid March, when the team pressed high and strangled the opposition close to goal. It was a win, though, that left a question mark hanging; could strikers Gabriel and Bruno Henrique consistently mark and harry with the same intensity without picking up cards? The pair are talented but lack self control. Sure enough, Gabriel was sent off at home to Penarol, while Bruno Henrique received a well deserved red card in a local game. Wednesday night in Montevideo will be a thorough test of their temperament.

And then there is the issue of the playmaker. Against Liga the veteran Diego came up with one of the best performances in his three years at Flamengo.  The crowd, though, have been impatient to see more of the expensive new signing, Uruguayan international Giorgian De Arrascaeta. Abel Braga has given way, and left Diego out to make way for the newcomer.

De Arrascaeta is wonderfully talented, with fine passing ability. But he is not a genuine midfielder. His best work comes in the final third of the field – although, without great pace or strength, it is not always easy for him to find the space to create. And he contributes little to the team’s marking, which can be a problem if he is used in a wide role. It would be a bold move to select him for this crunch game – because at the end of the 90 minutes there will be no half measures. In the eyes of their own fans, the Flamengo team will either be heroes or villains.