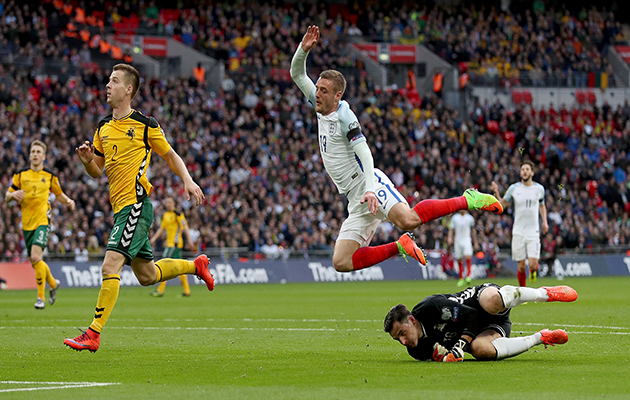 There seems little doubt that England will qualify for the coming World Cup finals in Russia. Whether they will do anything of consequence there is quite another matter.

Under Gareth Southgate’s regime, they have just lost by the odd goal to a much depleted Germany team, and made somewhat heavy work of defeating a Lithuania side ranked among one of the lowest in Europe.

Gareth Southgate? It seems to me that the jury is still out and will continue to be so until Russia is reached. He is an honest figure, who readily conceded that the performance against Lithuania at Wembley was not wholly satisfying, or as good as the previous display in Dortmund.

But how good was that? England managed only two major chances, one by the excellent Adam Lallana, which struck a post, the other by Dele Alli, who should probably have scored but instead shot against the onrushing goalkeeper.

Against a heavily packed defence, England at Wembley, subverted it in the classical sense went past three defenders in style, cut the ball back from the by-line, enabling the veteran Jermain Defoe to score. That surely is the time honoured way of how to overcome a packed defence, and Sterling with his speed and skills is well capable of it. But why did it happen only once?

In England’s central midfield, one saw no true creator. Quite what Jake Livermore was doing there in Dortmund was a mystery. Solid, dependable but quite without flair or the inspired pass. Ditto Arsenal’s Alex Oxade-Chamberlain at Wembley. The sad fact it that England simply do not produce the classical inside forward with his ability to split opposing defence with a sudden Andrea Pirlo-like devastating pass.

The solitary obvious exception to the rule surely being Jack Wilshere, so often alas prey to serious injury, discarded this season by an Arsenal team which could badly have done with him, now at Bournemouth on loan where, after such a bright beginning, he has lately come on as a mere substitute.

It is rumoured that the Gunners may let him go come the close season. If they do then they are foolish to a degree. Not to mention that he is that extreme rarity, a player who has been developed by the Gunners, coming to them from Luton as a mere boy. Which leads me in parenthesis to the subject of Chelsea, who surely ought to display a note above their training grounds of junior teams ‘Abandon Hope All Ye Who Enter Here’.

It is seldom indeed that I have anything positive to say about Uefa, but their new chief executive, Aleksander Ceferin, was surely speaking strong common sense when he recently deplored the fact that Chelsea have some 38 players out on loan, and that something should be legally done about it. Season after season Chelsea’s gifted youth teams gain major titles, but how many of them ever get the chance to feature in the first team? At the moment, just one.

Returning to the subject of England, at least there is Harry Kane to come back and it would make sense to deploy two up front, with Kane partnered by the speed and thrust of Jamie Vardy. Encouraging was the display of Keane at Centre-back, hardly much troubled at Wembley but resilient in Dortmund. He should certainly stay. John Stones? Hardly tested at Wembley but still prone to those unforced errors, those moments of over confidence. But greatly encouraging on Sunday, when he came on late was the pace and enterprise of Manchester United’s young Marcus Rashford, operating on the left wing rather than his preferred position as a striker.

Certain columnists are still writing about England’s humiliating defeat in the Euros by Iceland as the worst ever. Quite untrue. That Iceland team consisted of individuals playing regularly in good European football, among them, in Gylfi Sigurdsson, one of the most talented attackers in the Premier League.

The United States team that so humiliated England at Belo Horizonte in the 1950 World cup was a ragbag collection of part-timers and international nonentities. While on paper at least the England team was full of established stares. Finney, Mortensen, Mannion…

Meanwhile, enormous credit to Michael O’Neill who has built a Northern Ireland team triumphantly greater than the sum of its parts. Comfortable victory over Norway in Belfast. The play-offs are surely in sight.