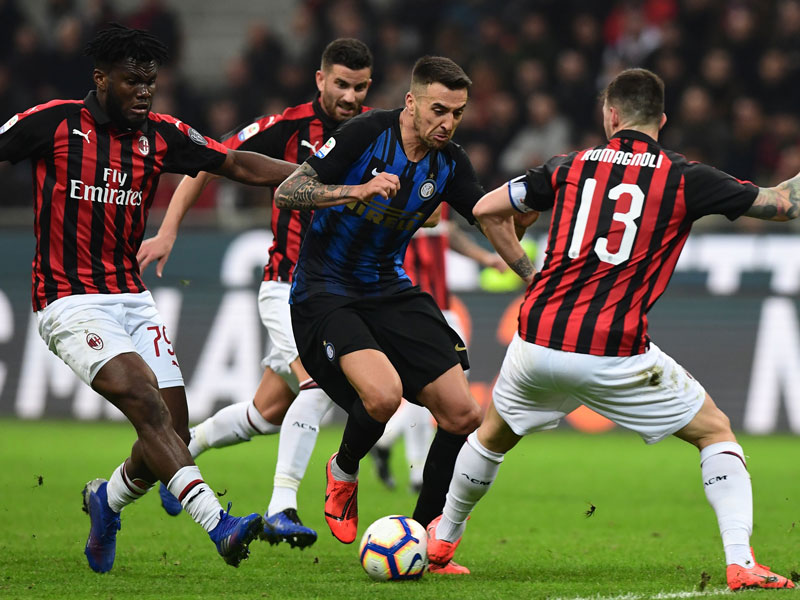 Paddy Agnew’s Notes From Italy: Return Of The Milan Clubs

On Wednesday of this week, Milan’s two favourite sporting sons, namely football clubs AC Milan and Internazionale (better known to you as Inter Milan), turned up at City Hall with a €1.2 billion project for the building of a new, jointly administered football stadium.

The ambitious project envisages the building of a state of the art, 60-65,000 capacity stadium right beside the city’s famous “Meazza” ground at the San Siro by 2023, with the old stadium then due for demolition. A new building complex, including hotels, congress centres and shopping centres would then be built on the site of the historic old San Siro stadium. Needless to say, a lot of water will flow under various bridges before this  project is realised, if indeed it ever comes to pass.

However, if nothing else, this project serves to remind us that the Milan clubs are alive and well and anxious to re-establish their one time position, at or close to the top of the European tree. The point is that these have been lean times for these two aristocrats of Italian football.

Neither of them have won an Italian title since AC Milan triumphed in 2011. Since then, they have suffered and wilted as Juventus have rattled in eight consecutive titles. Worse still, the appearance of a Milanese club in the Champions League final has become a collector’s item.

It is now 12 years since seven times Champions Cup/League winners AC Milan played in the final, beating Liverpool 2-0 in Athens in 2007. Likewise, Inter Milan have got nowhere near the final since beating Bayern Munich 2-0 in 2010, the year of the Mourinho inspired treble of Champions League, Serie A title and Italian Cup.

As both clubs struggle to keep the fast disappearing European pacesetters in sight, the idea of a new stadium to replace the San Siro sounds like a cross between a logical business plan and a cry for help. Milan managing director Ivan Gazidis put it this way this week:

“Look, Arsenal make an annual €120 million from ticket sales. Bayern and PSG make €100 million but Milan and Inter make only €40 million each…”

No real need to observe that the impact of the key role of the Juventus owned Allianz stadium in Turin in the ongoing resurrection and success story of the Old Lady has not gone unnoticed. Both Milan clubs are still struggling to re-establish themselves in the wake of a traumatic break with long time (and very generous) owners, in the shape of oil millionaire Massimo Moratti at Inter and former Prime Minister and media tycoon, Silvio Berlusconi, at AC Milan.

Irrespective of how the new stadium project will develop in the long term, both ownerships, the US Elliott Management Corporation at Milan and the Chinese Suning Holdings Group at Inter, are keen in the immediate short term to lay down some sort of gauntlet that would challenge the current Juventus domination. In that context, it is not irrelevant that both clubs head into the new season with new coaches at the helm – former Italy, Chelsea and Juventus coach Antonio Conte at Inter and former Sampdoria coach Marco Giampaolo at AC Milan.

As both men settled down to the start of seasonal training this week, they made the ritual promises, not without a hint of good old-fashioned city rivalry.   Conte suggested that it was time for Inter to “put their heads down and pedal hard” whilst Giampaolo by way of reply called on his troops to “hold their heads high and play football”.

In effect, both men start off from very different positions. Inter finished 4th in Serie A last season and have thus qualified for the Champions League. In contrast, Milan, who finished 5th just one point behind Inter, have been excluded from the Europa League by UEFA because of Financial Fair Play (FFP) irregularities.

Flanked by two of the former AC Milan greats, now directors, Croat Zvonimir Boban and the peerless Paolo Maldini, new boy Giampaolo took a philosophical view of his club’s European ban at a midweek news conference. It will give us time to train properly, he suggested, so as to be all the more ready for Europe the season after next.

That is certainly “time”, which at least for now, Antonio Conte will not have. When he spoke at his news conference of “sweat”, “work” and “discipline”, he was merely reflecting the fact that the Suning ownership  would like some meaningful success, and the sooner the better.

For the time being, the Inter squad would look to be both more experienced and battle-hardened, whilst the younger AC Milan squad could yet reveal unrealised potential. Worth noting that two of Inter’s “enfant terribles” from last season, Argentine striker Mauro Icardi and Beglian midfielder Radja Nainggolan, have been (or soon will be) offloaded in a clear sign that the club has had enough of the various disciplinary shenanigans involving both players last season. Not for nothing, Conte spoke of sweat, work and discipline.

One nagging question remains. Will the two new men be able to do better with largely the same squad as that handled by their predecessors, namely Luciano Spalletti at Inter and Rino Gattuso at AC Milan?   Or were both those coaches prematurely dismissed?   Time will doubtless reveal all.