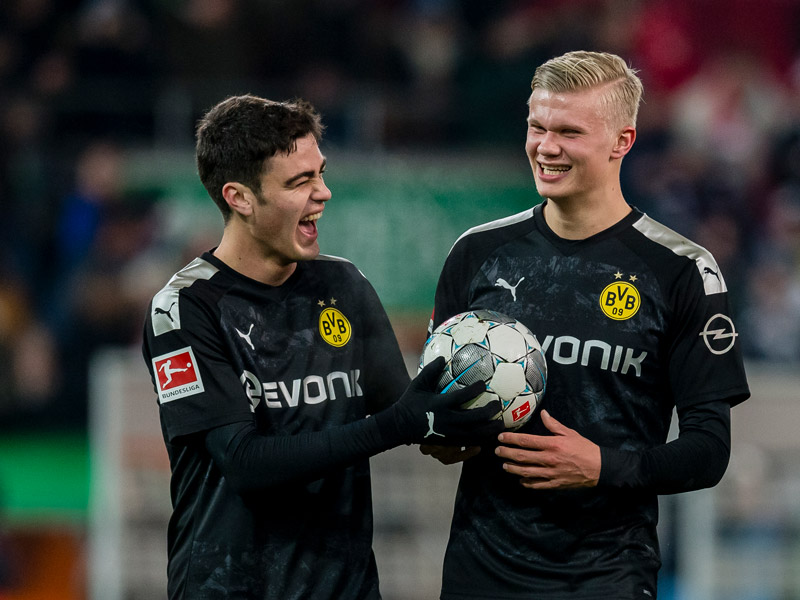 Nick Bidwell’s Notes from Germany: Reyna And Haaland Two Stars For The Future

Marksman extraordinaire Erling Haaland – responsible for eight goals in his first four competitive games for Dortmund – is not the only ‘Schwarz-Gelben’ teenager to have recently announced himself at the Westfalenstadion with a supersonic bang.

After netting a wonder goal in Dortmund’s 3-2 loss at Bremen in the Round of 16 of the German Cup, 17-year-old American creative midfielder Giovanni Reyna has every chance of going head-to-head with Haaland in the media hype stakes.

The pair are uncannily similar. Both prodigiously talented. Both immune to stage fright. Both literally born to be high-class footballers. Haaland’s father Alfie played at the back or in midfield for Leeds United, Manchester City and Norway, while Giovanni’s dad is Team America Hall of Fame playmaker Claudio Reyna.

On the evidence of Reyna’s supersub goal against Bremen, the kid has the stars very much within reach. Here was a moment of pure brilliance, manoeuvring the sphere on the edge of the box with ball-on-a-string insolence, dancing past three defenders, then propelling a right-footed curler into the top corner. Goal of the Season stuff.

Giovanni, who joined Dortmund last summer from New York City FC, only has been a fully paid-up member of the ‘Schwarz-Gelben’ pro squad since the turn of year and has yet to start a first-team game for the club. He was handed his Bundesliga debut as a substitute in the 5-3 away win in Augsburg last month and subsequently, has made a couple of top-flight cameos versus Koln and Union Berlin.

His epic contribution in Bremen – apart from his stunning strike, he was controversially denied a solid penalty claim –  could well be the spark that ignites an unextinguishable fire. The Dortmund ranks may be awash with youthful potential at the moment. But the young American clearly has something extra. The intangible that thrills.

Dortmund coach Lucien Favre, not normally one to heap excessive praise on a young player, certainly gives the impression of being a huge fan. “You’d have to be blind not to spot his footballing talent,” declared Favre on promoting the youngster from the Under-19 side to the senior team retinue.

Old and wise before his time, Reyna junior appears a little bemused with all the attention: “It’s crazy to think that my friends in the States are still going to High School and I’m here in Germany playing in the Bundesliga.”

Written off as relegation certainties in late autumn, Koln are doing an excellent job of proving the pundits wrong. Under new coach Markus Gisdol, the Billy Goats have won four of their last five Bundesliga encounters, impressively hauling themselves out of the drop zone. The main man on the pitch? Colombian striker Jhon Cordoba, who recently became the first Kolner to score in six consecutive home games since Germany frontrunner Klaus Allofs in 1984.

In a season of countless injuries to key personnel, league leaders Bayern Munich have yet another star on hospital watch. Croat wide-man Ivan Perisic is likely to be out for at least a month – and probably more – after breaking his ankle in training. Perisic, who currently is on loan at the Allianz-Arena from Internazionale, had been performing very well this season, invariably excellent when asked to fill in for the the unavailable Serge Gnabry or Kingsley Coman. “It’s a shock for us,” sighed Bayern coach Hansi Flick. “Ivan had done us a lot of good with his dynamism and experience.”