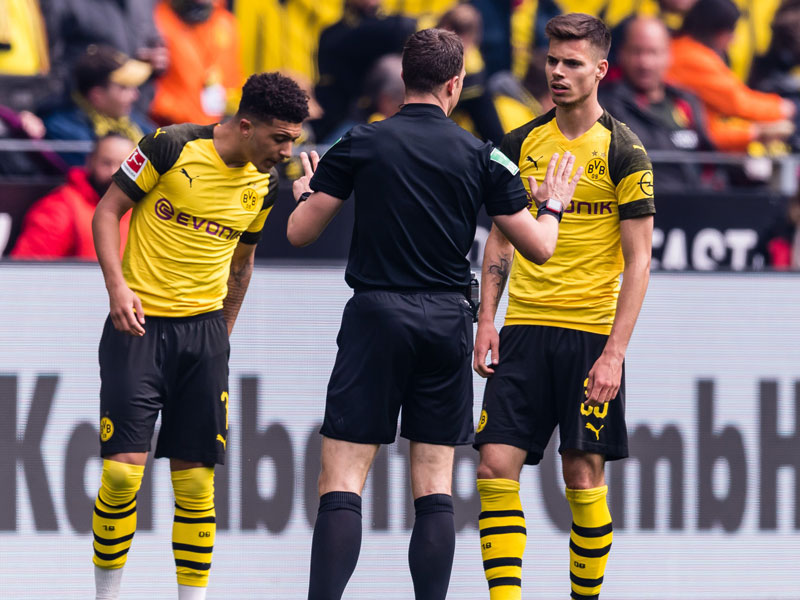 Dortmund coach Lucien Favre was not a happy man in the wake of his side 4-2 home loss to Schalke in a typically combative Ruhr derby, a result which dealt a further blow to his side’s Bundesliga title aspirations.

The cause of the steam billowing from Favre’s ears? The controversial VAR penalty which Schalke converted early in the first-half to make it 1-1, Dortmund centre-back Julian Weigl adjudged to have handled in the box.

Harsh does not begin to describe the spot-kick award. Weigl’s only crime was to have a shot blasted at him from close range and by no means did he deliberately make his body bigger to block the ball. Few Schalke players lodged a protest. Even interim coach Huub Stevens looked bemused at the turn of events.

Pegged back at 1-1 after dominating the early exchanges, the Dortmunder suddenly found themselves back to square one. And psychologically, they never quite recovered. This was a bump in the road they couldn’t navigate. They subsequently would lose their nerve as well as their discipline, with both skipper Marco Reus and Marius Wolf red-carded for high and late challenges.

At his post-match press conference, the usually mild-mannered Favre promptly went into wild-eyed diatribe mode: “What this penalty shows is how ridiculous football has become. This handball rule, it’s the biggest scandal in football for years. It’s a joke, a disgrace.

“Should the players have to cut off their arms and run without them? Without your arms you have no balance. You need your arms. It’s becoming the objective of every player to try to shoot against the arm of an opponent. I’d like to know who came up with this idea. Football is making itself laughable.”

Favre also suggested that Dortmund’s head-to-head title race with Bayern Munich was effectively over, though probably wishes he had not been so hasty. Some 24 hours later, Bayern would themselves run aground, held to a frustrating 1-1 draw at lowly Nurnberg. With three rounds of the championship to go, Dortmund are now two points off top spot, albeit with a vastly inferior goal-difference. It’s not looking good for the Schwarz-Gelebn. But it’s not Mission Impossible either.

“We will only give up when the mathematics say so,” insisted Dortmund CEO Hans-Joachim Watzke. “We owe that to our fans.”

1. Another new broom at Schalke.

In need of a new head coach for next season, Schalke are thought to have two names on their shortlist. One is Borussia Monchengladbach boss Dieter Hecking, who is due to leave the Foals at the end of the season. The other is the former Huddersfield Town manager David Wagner, a man with a lot of admirers after over-achieving on a shoestring at the Yorkshire club. Wagner used to play for Schalke, featuring as a striker for the Royal Blues in the mid-1990s.

Wolfsburg have announced the signing of the Young Boys of Bern right-back Kevin Mbabu. The 24-year-old Swiss international, previously with Newcastle United, has signed a four-year contract with the VW club and costing just 7.5 million euros, looks good value.