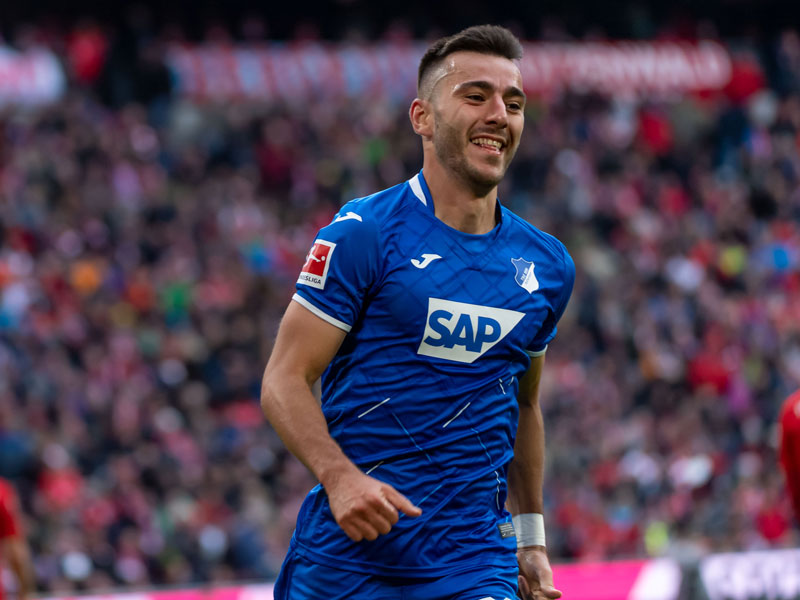 Hoffenheim’s Armenian striker Sargis Adamyan is never likely to forget his maiden start in the Bundesliga, the day he scored both goal’s in his side’s shock 2-1 win at perennial champions Bayern Munich.

As recently as 2017, Adamyan was scratching a living in the fourth tier of the German pyramid for TSV Steinbach. Now, in the most amazing of tales, he is the name on everyone’s lips, the 26-year-old late-bloomer whose sure-footed finishing sent Bayern spinning to their first defeat of the season.

Adamyan, a bargain 1.5 million signing from second division Regensburg this summer, probably would not have been on the Allianz-Arena pitch if first-choice Hoffenheim front-men Andrej Kramarix and Ishak Belfodil had not been sidelined with a knee injury and tonsillitis respectively. But how emphatically the Armenian international seized his chance.

“You could say this is the biggest moment of my career,” he declared in a emotional post-match interview, almost speechless with delight. “To play in such a stadium is an amazing dream for me.”

On the evidence of his five-star performance against Bayern, his days as a relative football nobody are well and truly over. He comes complete with pace, power and intensity, is sharp and elusive in his off the ball-movement and can shoot powerfully with either foot. Apart from an early chance which he spurned, he showed no sign at all of any big-match nerves and also put in a full ‘gegenpressing’ shift.

The son of a shoemaker – born in the Armenian capital Yerevan but brought up in the north-eastern German state of Mecklenburg-West Pomerania – he clearly revels in high-profile away fixtures. Last term, while leading the Regensburg line in the ‘2 Bundesliga’, he rattled in a quick-fire hat-trick in the 5-0 dismantling of the once-mighty Hamburg.

An extra string to his bow is his versatility. At Steinbach, he operated in all manner of attacking positions – as a number ten, right-winger and second striker – and more often than not lined up on the left-wing for Regensburg,  regularly cutting inside to score.

A regional table tennis champion in his youth, Adamyan may be an elite novice, but that’s exactly where he finds his hunger and drive. He always thought he would reach the promised land one day and is permanently fired up to make sure he stays there.

“This is his first experience in the top-grade and he gives his absolute all in every training session and match,” says Hoffenheim teammate Benjamin Hubner. “It’s great to see someone like him rewarded.”

One of the new faces in Joachim Low’s ‘Nationalmannschaft’ squad, 23-year-old Freiburg centre-back Robin Koch most definitely comes from an impeccable football bloodline. His father Harry Koch – he of the extravagant curly perm – was a cult hero stopper for Kaiserslautern in the 1990s, especially to the fore when the newly-promoted Red Devils sensationally claimed the Bundesliga title in 1997-98. “I’m proud of what he’s achieved,” says Harry. “In the last two or three seasons, he has continually improved. Naturally we’ve been hoping for a call-up for Robin. That it’s happened so quickly does have something to do with the many German players who currently are injured or sick.” A typical soccer dad, keeping his offspring’s feet on the ground.

Hamburg coach Dieter Hecking, someone who embodies old school football values, has hit out at the ever-increasing amounts spent on player wages in Germany. “Pro salaries are too high, so are transfer fees,” railed the ex-Wolfsburg and Gladbach boss at a sport-politics symposium in Hannover. “We’d be better off if the figures were a little less. What a Robert Lewandowski earns at Bayern (reportedly 20 million euros per year) is absolutely justified. But average players receive too much.”