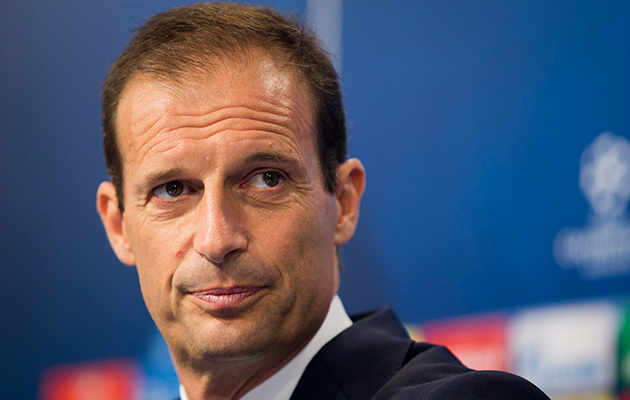 Normal service at the top of the Serie A table has been resumed.   Reigning champions, “Old Lady” Juventus and second placed Napoli resumed their winning ways last weekend, respectively defeating Palermo 1-0 and Chievo 2-0.

To be fair, the shock of Juve’s 2-1 defeat by Inter Milan eight days ago had lasted only two days.   Thanks to a mid-week programme of games, Juventus bounced back to beat Cagliari 4-0 last Wednesday on the same night that Napoli were held to a 0-0 draw by Genoa.   After just six days, Juve are now four points clear of third placed Inter but just one clear of second placed Napoli.  Even at this early point in the season, the suspicion is that Juventus and Napoli are about to fight out a title contest, all of their own.

These are, of course, early days to be jumping to conclusions.   The Dinamo Zagreb v Juventus Champions League tie tomorrow night and Wednesday’s Napoli v Benfica game may tell us more.   Juventus probably need a win in Zagreb to rid themselves of the nagging doubts prompted not only by that loss to Inter but also by both a 0-0 draw with FC Seville in their opening group game as well as a less than all-impressive performance in Palermo on Saturday night.

Juventus, widely acclaimed by many of us as unstoppable in Serie A this season, have encountered unexpected hiccups.   For the time being, the Juventus midfield of such as Khedira, Pjanic and Hernanes looks very much like the poor cousin of a midfield which in recent years has rotated around Pirlo, Pogba and Vidal.

Mind you, this time last year as Juve sank to the unaccustomed wrong end of the table, we were predicting dire things for them.    They got their act together then whilst, even if there have been those recent “hiccups”, they are still top of the table.

Nonetheless, one suspects that Juve coach Massimiliano Allegri would much appreciate a convincing performance in Zagreb to eliminate any nagging doubts.   Given the importance of the game, Juventus will field all the Big Guns available to them with Paulo Dybala (rested against Palermo) returning to partner compatriot Gonzalo Higuain in attack.

Significantly, too, the “BBC” three man defence of Barzagli-Bonucci-Chiellini returns to the air waves in front of goalkeeper captain, Gigi Buffon.   As for the midfield, Brazilians Alex Sandro on the left and ex-Barca man Dani Alves on the right, will probably flank Khedira, Pjanic and Hernanes.

For Napoli, 2-1 winners in their opening game away to Dinamo Kiev, their home tie against Benfica looks a deal less intimidating.   So far, Napoli have weathered the “life after Higuain” storm so well that many critics would argue they are currently playing the best football in Serie A.   That might well be but a convincing performance against Benfica would reinforce the point eloquently.

Polish striker, Arkadiusz Milik, scorer of four goals this season, returns to the side after having been rested for the first hour of the home game against Chievo.  He will be partnered by Belgian, Dries Mertens and Spaniard, José Maria Callejon, in a three man Napoli attack which will depend heavily on the “supply line” afforded by talented Slovak Marek Hamsik.

As for the rest of Serie A, the weekend signalled a number of relative setbacks with Roma losing 3-1 away to Torino and with both Milan teams, Inter and Milan, being held to draws by Bologna and Fiorentina respectively.   Both the Milan teams remain very much a “work in progress” with Milan looking surprisingly defensive in a 0-0 away draw in which Fiorentina missed a penalty through Slovene Josip Ilicic and with Inter looking much less hungry in their 1-1 home draw. 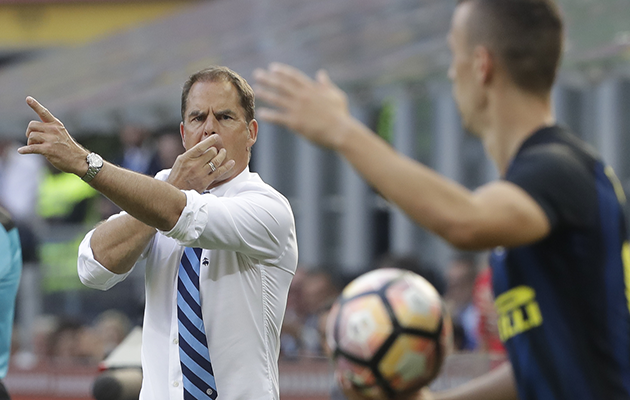 Sergeant major…Inter coach Frank De Boer barks out instructions to his players from the sidelines.

Indeed, Inter’s Dutch coach Frank De Boer was so unimpressed by his side’s start that after 28 minutes he had pulled off Frenchman Geoffrey Kondogbia saying that “if he doesn’t want to listen to me…he’s out”.   Later De Boer claimed that Kondogbia had simply ignored his instructions on how he was to approach the game.   De Boer’s move confirmed the surprise impression that the supposedly laid back Dutchman is in fact something of a seargant major, a point already underlined when he sent the Croat Marcelo Brozovic home last week for disciplinary reasons (a late night discotheque outing).

Inter get a chance to put their mixed seasonal start back on the winning path when they line out away to Sparta Prague in a Thursday Europa League tie.  One suspects that neither Brozovic nor Kondogbia will be in the squad for a group game in which Inter need to wipe out the memory of their opening game 2-0 loss at home to Israeli side Hapeol Beer Sheva.   For the record, Sparta lost even more heavily in their first game, beaten 3-0 away to Premiership side Southampton.

Final thought concerns the “evergreen” Francesco Totti who this week turns 40.   On Sunday, he scored the 250th Serie A goal of his remarkable 25 year long career, scoring from the penalty spot in Roma’s 3-1 loss to Torino.   We are clearly well into the last chapter in the Totti career but it would like the great man will go out in some style.